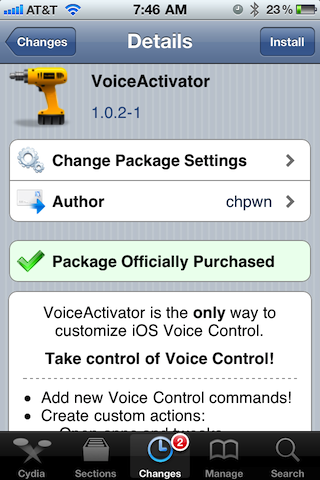 Voice Control has always been something of anomaly to me. In fact, I’m always a bit startled when I see it pop up on my iPhone after accidentally holding the home button one second too long.

It’s almost as if I’ve forgotten that the functionality even exists, although I know its tucked away in my iPhone somewhere. The point is, Voice Control just isn’t useful in its current state. I can’t recall one instance where I’ve actually used it outside of showing off the capabilities.

Fortunately for us, that’s what jailbreaking is for — turning mundane functions into something useful. VoiceActivator is the epitome of usefulness, transforming Voice Control into a hot commodity…

For the record, VoiceActivator isn’t cheap. It’s definitely on the high end of the scale for a jailbreak tweak at $4.99.

But for the amount of functionality you get with this tweak, backed up by the developmental prowess of well-known developer, chpwn; I was more than happy to slide a 5-spot his way. 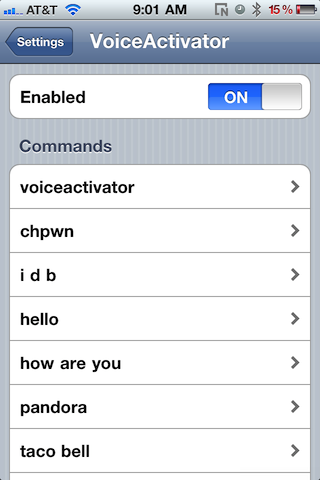 VoiceActivator gives you the ability to create custom voice commands for use with Voice Control. These voice commands can be literally anything, as you can see from the video and from the screenshot above.

Once you create a command, you can assign it one of three actions: Speak, URL, and Activator. The Speak and URL options are fairly self-explanatory, while the Activator actions are really what make VoiceActivator shine. 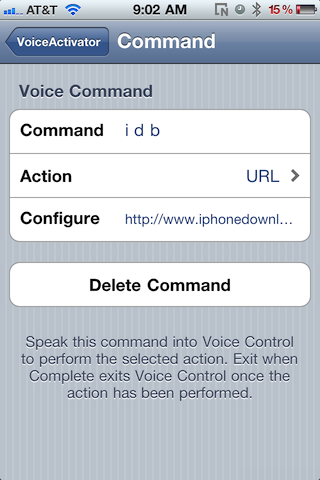 Using these actions you can pretty much make your iPhone open any app, or perform any function using only your voice. For instance, you’re able to take screenshots, lock your phone, open Pandora, open a website, etc.

The only thing that you can’t make it do is make you breakfast. You can tell it to do so, but I haven’t been too successful in that regard.

VoiceActivator is the kind of jailbreak tweak that makes me think that jailbreaking has reached its zenith. I should know better than that, because as soon as I think that, something else comes out that impresses me even more.

Folks, it’s time to shelve a couple of lattes and pony up for VoiceActivator, don’t you think?