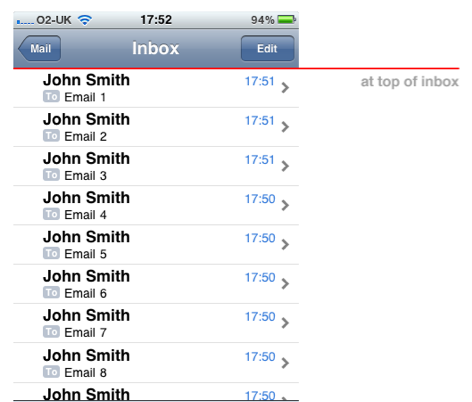 This one can be filed under “incredibly specific.” The question is simple: What happens when a new email arrives in the iPhone’s Mail app?

That question may sound ridiculous at first. You may immediately say, “Of course I know what happens! I get a new email! Isn’t it that simple?” But do know what really happens? How does Mail.app decide to deliver email?

“The Invisible” is a blog that looks at why interfaces behave in certain ways, and specifically, the hidden elements that make interfaces work. The iPhone’s Mail.app behavior is one of those interfaces. I’ll walk you through what Basil Safwat talks about in his post on The Invisible.

When an email arrives in Mail, it “pushes” all the other emails down the list that is your inbox. Seems pretty simple to understand, right? If you use Mail on the iPhone often, you’ve seen the way new email comes in and pushes the other messages down.

But what about if you’re not at the top of your inbox? When you scroll down through your list, what happens when you get a new email?

Let’s say that you’ve scrolled down to the fourth email in your inbox: 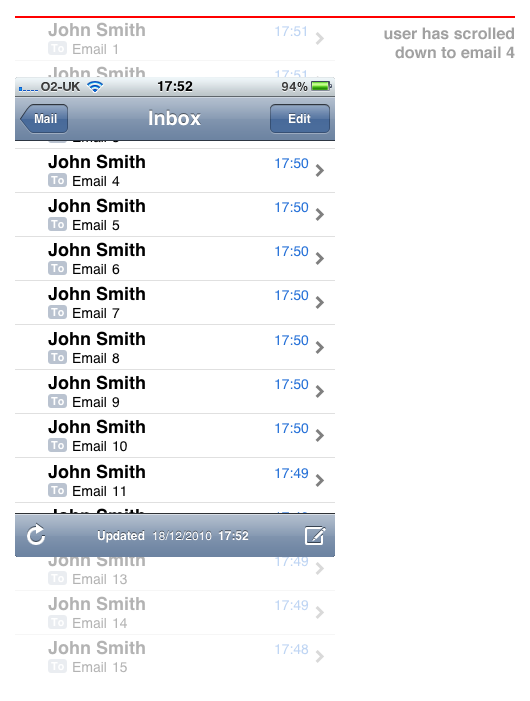 In this case, you are automatically pulled to the top of your inbox, where your new email awaits you.

So far, Mail handles incoming emails in two ways. If you are at the top of your inbox, a new email will simply push the existing list down so that it remains on top. If you are slightly scrolled down the list, you are autoscrolled to the top of the list when a new email arrives.

When you think about it, the way Mail works is pretty cool. It adjusts its behaviors based on the user’s own behavior. The way it handles incoming email makes sense until you think about having lots of emails in your inbox.

Most likely, you’de be rudely pulled to the top to see some message that wasn’t even relevant enough to require your immediate attention. And there would be no easy way of getting to where you once were in your inbox. Over time, you would probably develop a fear that the same process would be repeated when digging through your inbox.

Apple thought of that problem. And they solved it.

If you’ve only scrolled down a little bit in your inbox and you happen to receive a new email, you will be autoscrolled to the top of your list. That’s no big deal because it would be easy to get back to where you were.

If you are farther down your inbox, getting a new email does nothing.

If you scroll down more than three emails deep into your inbox, a new email has no effect. You still get the normal alert sound and indicators that an email has arrived, but your current location in your inbox does not change.

Three is the magic number in this case. 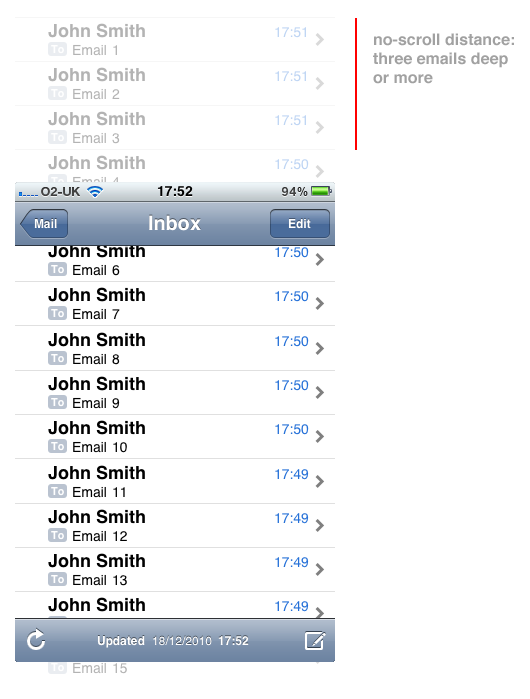 If you are less than three emails down your list, you’ll be returned to the top when a new email arrives. Any number more and you’ll stay where you are in your inbox. Go ahead, send yourself an email and try.

So, what’s the point of going through all this? In the grand scheme of things, it doesn’t really matter that Apple’s Mail app behaves the way it does.

However, what was just demonstrated shows immense attention to detail. Sure, it’s not something you’re going to show off to impress your friends, but it speaks to the care that Apple puts into its work.

Hopefully this shows you the amount of thought and attention that is put into the apps we use everyday. Well-designed apps are more than polish and pretty pixels. Real thought goes into great software.

Details like this are the reason that Apple is the successful company it is today. This level of attention to detail isn’t found in many other similar interfaces. Good job, Apple.

I think how Basil ended his article was perfect, “The addition of this extra detail has made the app less visible than if the detail wasn’t there. Lovely.”