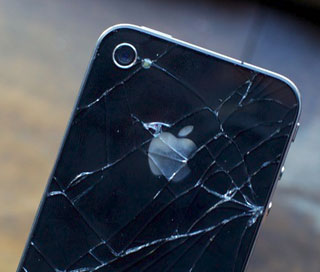 Another day, another frivolous lawsuit originating out of California. This time, the plaintiff is L.A. County resident Donald LeBuhn, who filed the lawsuit in earlier in the week.

This certainly isn’t the first class action suit that’s been filed against Apple recently, but it probably tops the list as being the most ridiculous.

In the suit, LeBuhn claims that Apple hid the fact that day-to-day use of the iPhone 4 would eventually lead to cracked glass.

Well, if normal day-to-day use entails dropping your iPhone on concrete surfaces, you might just be right…

Though a SquareTrade report makes it obvious that more people are suffering damaged phones, it’s not exactly rocket science here. The iPhone 4 features glass on both the front and the back, making it more susceptible to breakage.

The suit goes on to add that “months after selling millions of iPhone 4s, Apple has failed to warn and continues to sell this product with no warning to customers that the glass housing is defective.”

I’m sure there are some people who are upset over the durability of the iPhone 4, but I have to go with Apple on this one. If you want Apple’s daintily designed devices, you should already be aware of the caveats. That’s why they make cases.