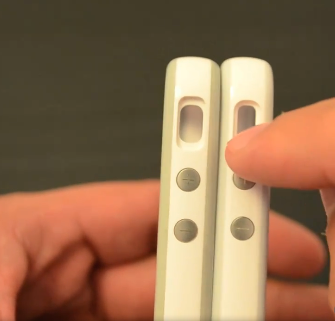 All signs are pointing to the fact that the iPhone 4’s antenna issues have been resolved by means of the subtle changes made to Verizon’s version of the iPhone 4.

Even still, that’s not preventing Apple from seeking to cash in on bumper sales, as previous bumpers have been phased out in favor of new universal bumpers that fit both AT&T’s and Verizon’s iPhone.


The new “universal” design is nothing more than a bigger hole for the iPhone’s mute switch, which differs slightly in position between the two versions; everything else appears to remain the same.

As you know, a big reason that Apple’s bumpers were so popular in the first place is due to the whole antennagate issue that resulted in signal degradation by holding the phone a certain way. This was infamously dubbed the “death grip” by understandably salty users.

It’ll be interesting to see if the bumper popularity is as big as it was with the original iPhone 4, since Apple was (hopefully) able to fully eliminate the antenna issues.

To me, the bumpers were never really about protection; they barely offer your iPhone any decent protection. They do, however, do a good job with handling the signal issues, so that’s why I ask the question: will Verizon users really need these bumpers?

For those of you who plan on getting a Verizon iPhone 4, will you opt for a $29.99 bumper?