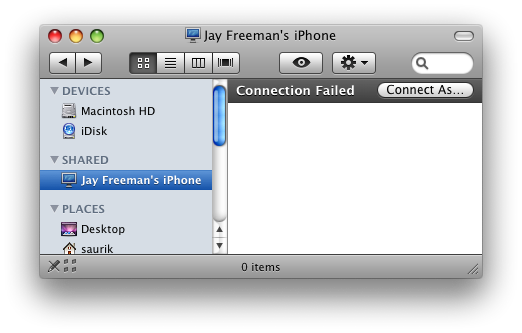 There are plenty of ways to access the files on your iPhone, whether through iTunes, SSH, SFTP, iFile, or a multitude of apps. However, adding automatic network sharing to your setup takes quite a few steps out of connecting to your device.

I tried these in an attempt to get my video game media center to read files on my iPhone from inside the network. If you’d like to turn your iPhone into a shared network drive for any reason, there are two particular Cydia packages that you should try today…

The first, which is only for Apple devices, is called Netatalk. This installs support for the AFP (AppleTalk) protocol which is discoverable automatically with Bonjour and is native to Mac OS X file sharing.

Your Mac will have no problems finding your iPhone, and you can add it as a disk just by clicking Go > Connect to Server in Finder. It’s a free package with no user interface or app icon, and also has a AFP-labeled SBSettings toggle available separately (also for free).

For Windows users, there is xDrive. This app has an icon and interface, with toggles within the app. It is a paid app which I have not purchased (since I rarely use Windows machines), so I cannot verify how it functions once you pay for it.

However, it will turn your device into a SMB share so that it will be discoverable by Network Places in the Windows control panel. There is also a free SBSettings widget for this one.

The potential of xDrive is great, for the XBox 360 uses SMB to look for shared network disks. To make Netatalk work with the 360, try adding the folder (that contains your media files) of your iPhone’s shared disk to the sources menu for one of the various Mac 360-sharing apps.

For all of you PS3 users out there, I believe that device supports uPNP protocol, and there should be a uPNP server in Cydia. Check it out and report back here if you have success.

Has anyone used this successfully or benefited from this method?