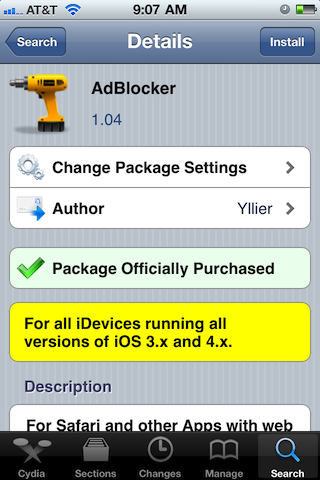 I’ve never really considered ad-blocking a feature I needed to have on my iPhone, and after using AdBlocker, I still feel that way. That’s not to say that AdBlocker is a bad jailbreak tweak, in fact it is excellent at some of what it does.

My point stems from the fact that ads just aren’t that big of an issue on the iPhone. Honestly, when was the last time an advertisement on the iPhone seriously annoyed you?

In fact, the main place where I find ads that annoy me is in Cydia, but ironically enough, AdBlocker doesn’t have an option to block ads in Cydia…

Granted, AdBlocker does a fine job on Safari advertisements, and there is an abundant amount of filtering options available in the Settings.app. I tested AdBlocker on numerous sites, and it eliminated the majority of the advertisements with no problems.

If this is all you’re looking for, then certainly AdBlocker is something you may want to look into; it fulfills this duty commendably.

In other areas, though, AdBlocker failed to perform. This is especially noticeable with advertisements in Cydia, as there isn’t even an entry for Cydia.app. 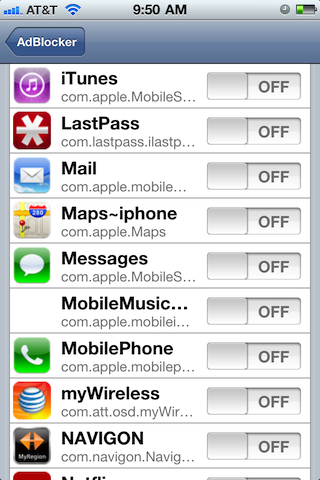 If your iPhone is jailbroken, you can download AdBlocker from Cydia for the price of $1.99.

Do you find advertisements annoying on your iPhone, or can you live with them?