More and more shopping is happening online these days, but plenty of people still prefer brick and mortar stores to buy their jeggings in. On December 30th, 2010, Apple’s latest patent was published. This patent hints at a native social networking app that Apple may implement in a future version of iOS. Such an app would merge social networking into a shopping experience.

This Ping-like, social-shopping network would allow users to have an enhanced shopping experience with participating merchants. Apple’s patent is titled “Social Networking in Shopping Environments.”

Chatting with other network users about products, getting crowd-sourced suggestions, and viewing entire store catalogs inside an all-in-one app are a few of the possibilities with this new patent. The idea of an Apple-designed shopping app is definitely intriguing.

Patently Apple describes the first part of Apple’s patent, entitled the “the kiosk,”

“Apple’s patent begins by describing “the kiosk” aspect of a new shopping app that is part of a social networking system. It may be operative to receive and store any suitable information received from a device like an iPhone.

Shoppers would be able to communicate with salespeople and store employees about certain products, promotions and discounts. There have been many times that I’ve wished there was an easy way to know if a certain store actually had the product, or article of clothing, I was interested in buying. Apple’s “kiosk” would allow users to see information about a store’s catalog with photos, video and other customer reviews. 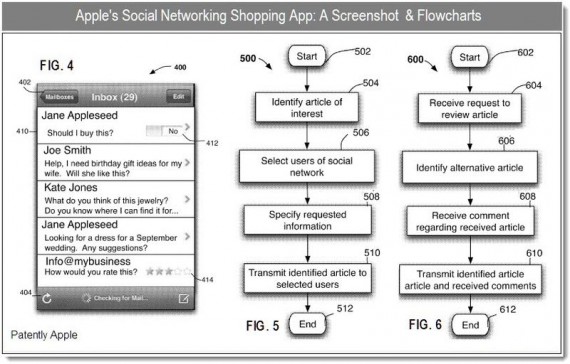 That’s where the social networking aspect comes into play; the app would allow you to interact with the shopping lives of your friends. Users would be able to send a simple yes or no question to a friend on whether they should buy something or not. You could also send queries to your followers to get suggestions about products or view some kind of rating system (a la iTunes reviews).

This app borrows crowd-sourced elements from services like Twitter and Formspring, and then combines them with the functionality of email and location check-in services like Foursquare. The app would allow users to “pre-shop” before having to actually enter the store, which is always helpful when you don’t want to waste time looking for that specific pair of pants.

This app should function in the same way that Ping is intended to work, but hopefully it will be more of a success. Realistically, it will probably take quite some time for an app like this to actually start shipping on iDevices. But who knows, iShop (That’s my guess on the name.) may come out sooner than we think.

What do you think about this app idea? Sound useful to you?