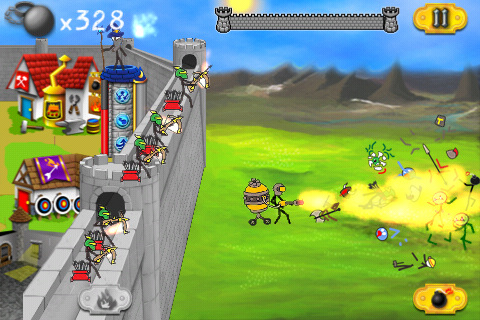 StickWars 2 created by Pinger, is the sequel to the popular Stick Wars game. I was impressed by the first game so I thought I would check out the sequel. If you are unfamiliar with Stick Wars, it was a popular castle defense game in which you must protect your castle against a never-ending army of stickmen. For those who used to spend your days as kids drawing stick men or playing Hangman then this will especially touch your heart.

The concept is pretty straightforward. In this game you must protect your precious castle against hordes of angry stickmen bent on your destruction. The stickmen will be charging at you with different speeds from the right and you will be mainly using your finger as your main form of protection…

Killing stickmen is done by easily swiping at the screen. Another method is just pointing at a stickmen, dragging them into the sky and flicking at the other stickmen to kill them in groups.

You will also see archers, repairmen and wizards returning to this sequel. Let me briefly explain the three for those who have not played the original.

Just like the original game you will earn money as you progress in the game. Money is awarded for how you kill the stickmen and this money can be used to upgrade your castle. However employing repairman, archers and wizards will deduct from money you receive, so I suggest not really using them until you can’t handle it by yourself anymore.

As I mentioned above, you will mainly use your finger to pick up and kill the stickmen. Once you get up to the higher levels, you will find yourself frantically picking and throwing. Later on in the game, the stickmen will charge at you with catapults and battering rams with different speeds so it really adds to the franticness.

Aside from the new colors and graphics, I don’t really think that the sequel did much better from the first version. Usually developers learn from their mistakes in the first version and make the second bigger and badder, but this was not the case! There is really no end to the game, and after dying a few times in the higher levels I just gave up.

This game was initially fun in the beginning, so casual gamers might like this game. Anyways, for fans of the first game you might enjoy this as its only $.99 in the App Store. Any takers?