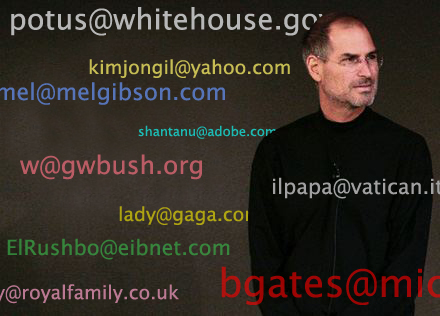 Steve Jobs is probably the only CEO of a major tech company to personally reply to emails every once in a while. Sometimes revealing future product updates or simply commenting on current affairs, Jobs is known for his short and precise emails that spread around the web in no time.

WikiLeaks, the very controversial website that has leaked hundreds of thousands of classified documents has recently leaked 140,000 emails from Steve Jobs, as unveiled by Scoopertino, which dug into the emails and found a few interesting tidbits for us…

Overall, the emails reinforce the image of Steve as a man of few words. A cursory review of this massive email dump reveals that 88% of his messages contain three or fewer words, with 84% of those offering only one: “No.”

He did get a bit wordier in an exchange with North Korean bad boy Kim Jong Il. Kim, aching to get a pre-release iPod touch for his son back in August, wrote to Steve requesting “a favor from one dictator to another.” In this case, Steve doubled the syllable count with a quick “Hell no.”

Interestingly, Steve’s most verbose message seems to have been directed to his old partner, Steve Wozniak. With the Woz preparing for his third appearance on Dancing With The Stars, Steve sent an eight-word tome offering his own personal merengue tips: ”Stand proud. Hips loose. Mouthwash five minutes before.”

By now, you probably have realized that this was just a joke by Scoopertino, a website dedicated to sharing “unreal Apple news”.