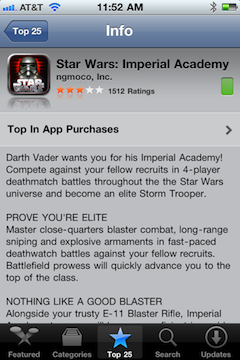 Don’t you just hate it when you’re in a store, and a clerk comes on the P.A. system, and blurts out, “This store will be closing in 15 minutes”?

That’s how I feel every time I purchase an app from the App Store. It closes, and I’m not even finished shopping! Wouldn’t it be nice, if we could keep the App Store opened  when downloading an app? That’s the premise of StayOpened, a new tweak for jailbroken iPhones…

What’s wonderful thing about StayOpened is that it works as advertised. Now when you purchase an app from the App Store, the store stays put, while your app downloads quietly in the background.

The way it works, though, isn’t exactly what I’d call pretty. Now, instead of any verbiage after tapping the free/purchase button, it’s simply a blank green rectangle, lacking the word “Install.”

Apparently, this a side effect of the tweak, and is perhaps something that will be remedied with an update. The important part is that the tweak works, and it’s free for download on Cydia for jailbroken iPhones.

StayOpened is something that I’ve wanted to see Apple implement themselves for some time now, and although Cupertino has thus far dropped the ball, I’m glad to see that it’s present in some way, shape, or form.

Is StayOpened something you’ve been desiring as well?

UPDATE: Version 1.1 of this tweak fixes the issues with the empty green purchase button. Our eagle eyed reader, Dan, mentioned in the comments section that this wasn’t actually a bug, but that there was an option in the settings app to change the text within this blank green box. Apparently, the developer decided it was best for all parties involved to at least populate the purchase box in the interim, and we agree.