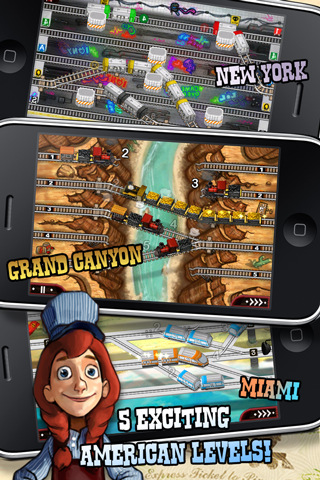 Train Conductor 2: USA is by the developer The Voxel Agents. I saw this game sitting in one of the App Store’s many lists and looking at the 4 star ratings made me do one of those impulse buys that I’m sure you all can relate to.

The game begins with a short tutorial and within a minute or so I figured out what I had to do. The objective is very simple, you must guide oncoming trains to their assigned track without crashing into one another…

The trains will come from both sides of the screen, and will have a number, letter or color indicating what track they need to get on. Successfully getting on the right track and safely navigating the train to safely leave the screen will give you one point. Eventually accumulated will give you enough to pass the level. However, the game ends when you crash into another train or obstacle, so you have to be lightly fast with your reflexes… or as I have mentioned in my other posts, like a ninja!

Controlling the trains is simple; you will use your finger to draw a line from the train to the corresponding track. Each track and train will have a number, letter or color assigned to it. So for example, if the train has a 3, you must guide it to the track with number 3. Tapping on the train will make it stop and you will use these mechanics over and over while avoiding other trains and obstacles the level throws at you. While simple, it becomes very challenging in the later levels as the speed increases dramatically and soon your fingers will be flying all over the screen.

Hence the name, the game offers 5 different US locations: Nashville, Las Vegas, Miami, New York and the Grand Canyon. Each stage features different music and was designed to reflect it’s actual personality. For example, graffiti in New York, beaches in Miami and so on. In addition, each stage has obstacles like in New York you have to navigate through the pillars without crashing.

That brings to me the next point, obstacles. A neat thing about these stages is that you have to use a different strategy for each one. As I mentioned in New York you have to avoid the pillars, Nashville throws you demon trains and the Grand Canyon makes you navigate through the big ravine without a completely connected track.

The graphics are great, as no two levels look alike. The 2D images and backgrounds are colorful and the music was tolerable but sometimes sounded like those cheap MIDI songs from those old cell phones from back in the day (more specifically, New York!)

I can’t argue with the 4 star ratings in the AppStore but I really didn’t have that much fun playing the game. Don’t get me wrong, the developers did a great job in designing a challenging and visually appealing game but personally, it really wasn’t an enjoyable experience. Crashing my train, restarting, figuring out what I needed to do and passing the level didn’t give me any sense of satisfaction.

But in all honesty, it’s really only my opinion against the hundreds of 4-5 star ratings in the App Store, so it’s definitely just me. Anyways for those looking for a well-packaged game with high ratings and low price then you can buy it for only $.99 in the App Store. I hope to hear your opinions!