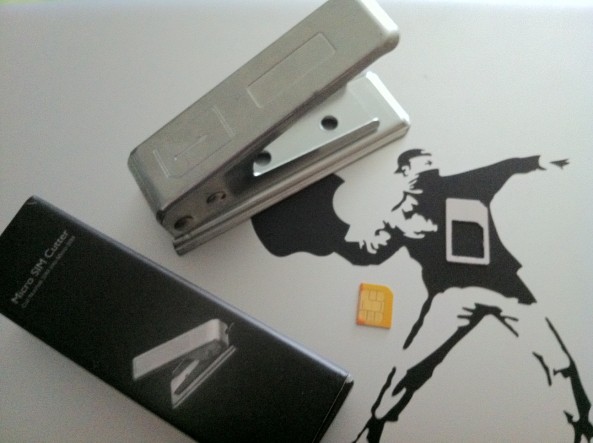 Apple loves to use and impose new standards for their products. That’s why you need a micro SIM in order to use an iPad 3G or the iPhone 4.

If like me you travel a lot and get SIM cards in various countries to use in your unlocked iPhone 4, you’re going to need a SIM card cutter, as most carriers aren’t offering micro SIMs, especially for pay-as-you-go plans.

Sure you could do this yourself, but do you really want to take the risk of messing up your SIM card? If not, then a SIM card cutter is your best bet…

A few weeks ago, the guys at MicroSIM Solutions offered to send me their micro SIM cutter for review. As a frequent international traveler, I knew this would come in handy at some point. And it did, when I arrived in Paris last week.

I had been practicing with their micro SIM card cutter on several used SIM cards I had at home, and I had noticed that not all chips are the same size on a SIM card. Some of them are actually slightly bigger than a micro SIM. Knowing this, I was really hoping the SIM card I was going to get in France would be the right size.

At my arrival in Paris, I asked my cousin (who picked me up at the airport) to give me the SIM card I had pre-ordered via a friend of mine. A quick look at it reassured me as it seemed to be the right size.

I grabbed my SIM cutter, popped the Bouygues Telecom SIM card in it, and pressed the handle to punch/trim the card. I then opened the SIM tray of my iPhone 4, put the newly trimmed card in it, rebooted, and voila. 5 seconds later, I was already taking advantage of this SIM card by checking emails and Twitter. Simple, quick, painless.

MicroSIM Solutions’ SIM cutter is the only one I ever used so I can’t really compare to other similar devices. For having used it myself, I can tell this is a very good product that does the job as described.

The SIM cutter came in a very nice black box, in line with Apple’s design. Sure the packaging doesn’t matter much, but it’s always nice to receive something in a nice box, isn’t it?

In the box was the SIM cutter as well as 2 free SIM adapters. Very convenient if you cut a SIM card, but later need to put it back in an iPhone 3GS for example. The SIM adapter will allow you to do that without any problem.

You can buy MicroSIM’s solution SIM cutter for 25 Euros, or about $30, with free shipping worldwide. All in all, I think it’s a very good product at a reasonable price.