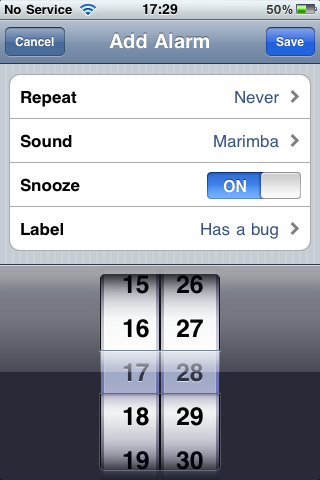 Last week we reported about a bug found in iOS 4.1 that was first revealed by fellow Australian and European iPhone users. The glitch, which happens during Daylight Saving Time (tonight for us in the US), causes your alarm clock to go off an hour late. That’s because your iPhone alarm clock doesn’t recognize the time change.

Apple is well aware of it, and to be honest with you, I expected them to release iOS 4.2 in time to fix this bug, but this apparently wasn’t a priority for them. They did however provide a few steps to make sure your iPhone will wake you up on time if you have an alarm clock set…

As we previously noted:

The bug appears when using a repeating alarm for anything other than “every day.” So for example, your alarm will go off an hour late if it’s set for “weekdays,” or “weekends,” or every “Monday.” The following alarms are not affected by the bug:

In short, you should delete all your alarms, and make sure to set alarms for specific days. Or simply use an old school, real alarm clock!

Strange bug, but again, even stranger is the fact that Apple didn’t fix it on time.