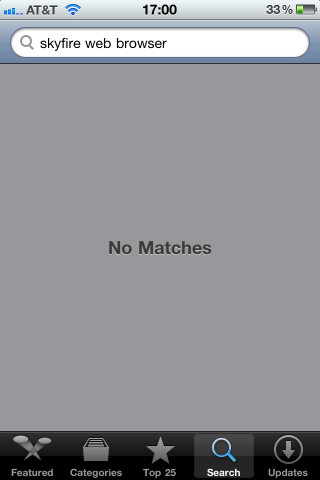 It took Apple 2 months to approve SkyFire but it only took them a few hours to pull the plug on this app that converts Flash content to HTML5. SkyFire was released this morning in the App Store but it’s already been taken down, for unknown reason.

If you look for SkyFire in the App Store right now, you’re probably going to get the same result as the screenshot above.

Why do you think SkyFire was taken down?

UPDATE: We now know why SkyFire is not available anymore…

SkyFire was removed from the App Store by the company itself. According to their blog, the popularity of the app is costing them a fortune in bandwidth, which is necessary to convert the videos from Flash to HTML5.

Skyfire for iPhone has been received with unbelievable enthusiasm. Despite our best attempts and predictions, the demand far exceeds our initial projections.

The user experience was performing well for the first few hours, but as the surge continued, the peak load on our servers and bandwidth caused the video experience to degrade.

We are very grateful for the demand. Within 5 hours, Skyfire for iPhone became the top grossing app, the third highest paid app overall and the top application in the Utilities category. Wow!

Please bear with us as we bring our capacity in line with the incredible demand – stay tuned.

That’s a nice problem to have…

[Thanks Bitnick for the tip]