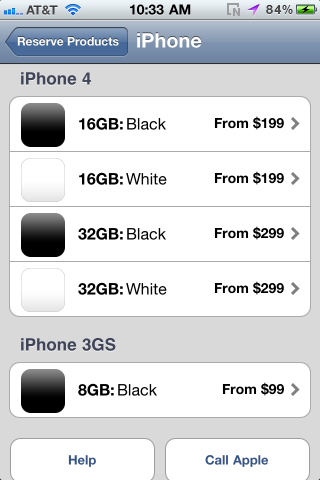 Could this be a sign of the impending release of the white iPhone 4?  In the latest update to Apple’s Store App for the iPhone, which features new concierge integration among other things, the white iPhone 4 is indeed available for reservation.

Whether or not this means that the issues surrounding the product’s production have been completely ironed out, and a release is right around the corner, is of course anyone’s guess. You have to admit, though, it’s certainly an encouraging sign for those who are still holding out…

It’s worth noting that Apple’s online store is currently not displaying the white iPhone 4 as being available for reservation. It’s likely that the online store simply hasn’t refreshed with the latest information.

Going on nearly 5 months since the iPhone 4 was released, many have simply given up and purchased the black version. Have you given in, or are you still holding out for the white version?

The Apple Store App can be downloaded for free from the App Store.