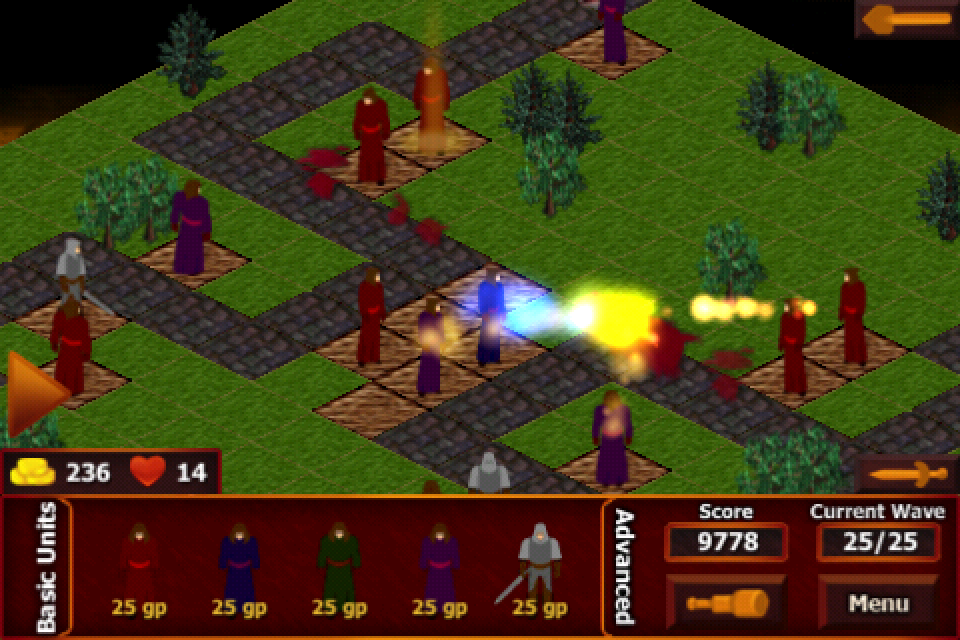 Protector: The Planes is the fifth incarnation of the game in the series. The series first showed its face face in 2008 with Protector. Since its first release the PC version has been played over 50 million times on the PC and Protector 4 is ranked in the top 25 best games at Kongregate (over 30,000 flash games). So being the 5th down the line, but first on the iPhone, iPod and iPad (iOS 3.1.3 or later) it’s already got an excellent track record.

For those of you who’ve never heard of the series, it’s a medieval and fantasy

based tower defense game with great emphasis on upgrades (outside of the level) and strategic placement of the units. In short, it’s a medieval/fantasy RPG style tower defense game. I’ve got to tell you, this thing’s huge. With 32 maps, 40 enemy types and 20 hours of game play, hope you have some sick days left from work, this game is gonna take a while to finish.

So what’s 20 hours of game play get you? Well, there are two playing fields in which the user can play in, the mortal realm (your main map) and the planes. There are 10 planes and can only be unlocked by leveling up your units and completing missions in the mortal realm.

You may be able to scrape by for a while without having to enter the planes by upgrading unit stats and bonuses using the skills tree located on your mini map. Such upgrades can include but not limited to, decreasing the cost of units, increasing power, range, and speed of their attacks.

Now it’s not clear whether it’s a bug or a feature, but the skill tree screen allows you to reset all the skill points spent and reassign them to whichever skill you’d like the second or more time around.

As the missions in the mortal realm get increasingly more difficult, you will want to enter and conquer the planes to upgrade your existing units, unlocking their special attack, and unlock additional units (as you only start with 5 of the 10 available). Each planar level corresponds to each of your unit types and subsequently their special attack.

In game, the enemies come in waves and walk through the level down a predetermined path, and exit on another side of the map. Your task, of course is not to let it reach the exit because then you lose life. However, in some cases, like a boss wave, the boss will pop out at the start again and have another walk through.

Your units can only be placed on certain cleared terrain squares. If you run out of room to place units and have enough gold you can pave a new spot to place another unit onto it. Don’t worry though, after each wave is completed, the game pauses allowing you to strategically place or upgrade existing units until you’re ready for the next wave. Be mindful, once you place a unit, you cannot sell it down the road. However, the game has a few second window for you to undo your decision should you accidentally purchased and placed the wrong unit, or put it in the wrong spot.

Stats on screen include gold (different units drop different amounts), health, units available, score, the current wave of enemies you’re facing and a special telescope. This telescope is a definite bonus as you can see what kind of enemy wave you’re up against next. The telescope stat window also displays the enemy’s hit points, amount of gold dropped and experience gained when killed, strengths, weaknesses, and special immunities.

What doesn’t show on the screen is how many times it has been upgraded during this mission. They just glow when they’ve leveled up.

It’s pretty simple to get a hang of it. To purchase and place a unit, select it and drag it to the spot you want it to fight from and release your finger to drop him there. You can pinch to zoom, or swipe your finger across the screen to move the map around for the larger maps.

There’s a button on the left side of the screen which allows you to change the action from normal, faster and fastest speed. The undo button is located just above speed control, but will only appear after you’ve placed a unit down.

To pave a spot for a new unit, the shovel is found in the upper right corner of the screen. Click and drag it over an empty spot and release. You can also just double tap on a spot, but the drag and drop method is more accurate.

To pause and build/upgrade, or call in the next wave after the current wave is completed the button is the hammer/sword located in the bottom right corner of the screen. 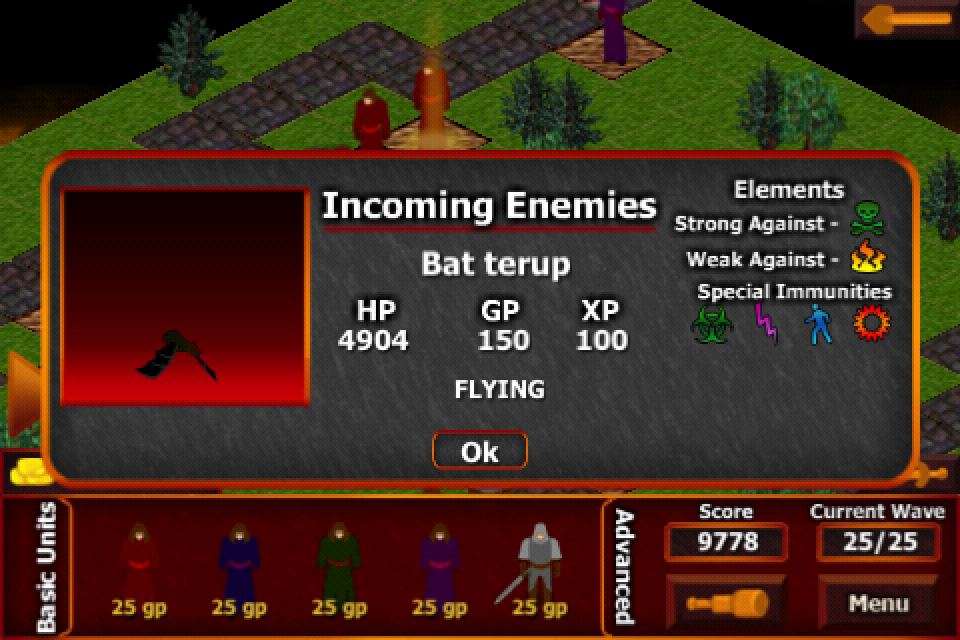 The settings menu has an option to reduce graphics or enable number crunching. It’s so you can see live attack stats (number of damage points the enemy unit is receiving, if immune to your attack and how much XP your unit is gaining).

When you first start up the game, the main menu has a button called Protectorpedia. The Protectorpedia is an all encompassing encyclopedia that have answered all of my in game questions. It’s got information on things from in game mechanics, types of attacks, player units, enemies, and what’s new with this version of the game. Very handy if you get lost, or don’t know what things mean.

In a word? Retro. But this reviewer likes it that way. Colours and animations reminiscent of a 486 or Pentium II machine ready game. It’s got few colours, repetitive terrain graphics and sharp corners. After a while the enemy walking animations tend to get repetitive in their generic strut, along with your mage and warrior attack motions.

It’s kept real with the added blood that’s left behind after kills of corporeal beings.

You can shuffle between the 8 music tracks by shaking your iDevice. The music sounds like MIDI or chip tunes but the songs are different and can influence your mood while playing (from motivational battle music, to calm and leisurely).

The creators, NNT Resonant Inc. put a lot of time into making the game series so they know what they’re doing in terms of strategy and re-playability. So at $1.99, it’s not the most expensive game I’ve purchased, but it sure is among the most in depth game, I’d say well worth the money.

How to Win a Copy of Protector – the Planes:

The developer of the game has been kind enough to give us 6 promo codes for this game. Here is what you need to do to enter to win:

Good luck to all of you!