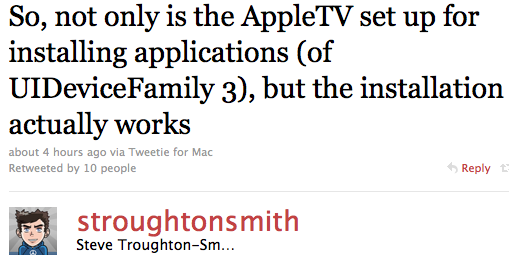 Well don’t rejoice just yet. While you can install apps on the Apple TV, you actually can’t launch those applications. So in short, the apps are on your Apple TV but they are useless since there is nothing to make them work.

Since the Apple TV has already been jailbroken, my guess is that the jailbreak community will come up with a way to actually run applications on the Apple TV. And of course, Apple will most likely natively run apps by next year’s next big software update.