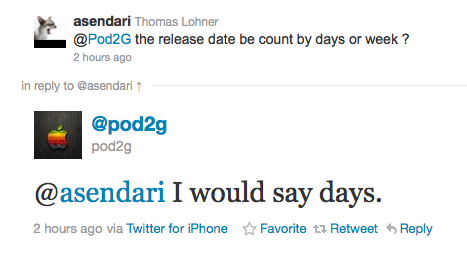 That’s an interesting tweet that pod2g, the hacker would found out the SHAtter exploit, sent out a couple hours ago in reply to someone asking when we should expect to see GreenPois0n released. According to him, the long awaited GreenPois0n jailbreak for iOS 4.1 will be released in days.

A few days ago the Dev Team demoed a perfectly working PwnageTool jailbreak that took advantage of the SHAtter exploit and successfully jailbroke an iPod 4G. There is every reason to believe that the Chronic Dev Team is near completion here…

Do you think GreenPois0n will be available in the next few days? More importantly, will you be using GreenPois0n or and updated version of PwnageTool?