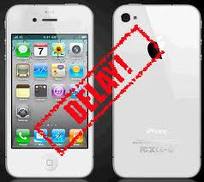 It doesn’t seem all that long ago when the iPhone community was up in arms about the delayed release of the white iPhone 4. Time has passed and overall I don’t hear much complaining across the front lines.

iPhone FAQ has a story that highlights an inventory leak from Canadian iPhone carrier, Rogers. The report shows a screenshot that lists the white iPhone 4 underneath the black version. It’s noted that once a product is listed in Rogers Sales Central it emerges shortly thereafter…

After various rumors as to why the white model of the Apple handheld was being delayed, the explanations seemed to dissipate as the calendar went on. Now as Rogers hints at the device’s arrival, US department store Wal-Mart is reported to have placed labels in some of their stores that would indicate the arrival of the white iPhone 4.

The holiday season seems to be the obvious guess as to when we will finally see the white iPhone 4. A release of this magnitude seems like it would be just as difficult to conceal as any product would be.

When do you think the device will surface? Give us your dates in the comments below.