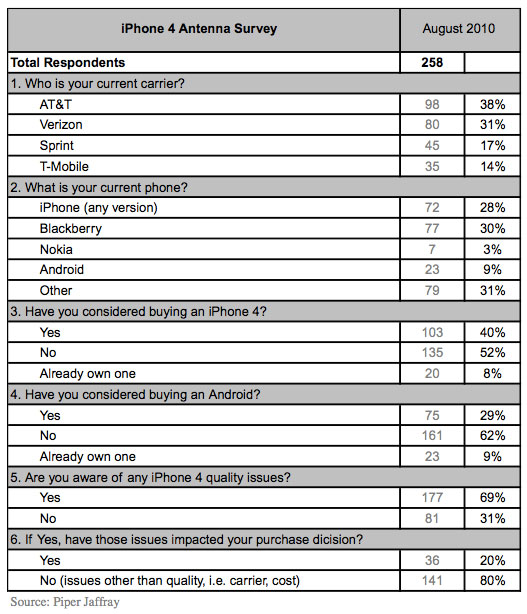 It has been several weeks since we have heard about the iPhone 4 antenna issue and how it is affecting the selling power of the new device. With record sales reported it comes as no surprise that a recent survey shows potential buyers are more concerned about the absence of a Verizon branded iPhone.

Apple Insider dissected a Piper Jaffray poll that was comprised of 258 cellphone users in Minneapolis, Minnesota. It turns out that of those questioned, 3 times the population was more upset over not having the iPhone available on Verizon than those who hesitated on buying the device due to the antenna…

Gene Munster reports that Apple could lose out on a potential of 880,000 September quarter sales of the iPhone 4, or 20% as indicated by the statistics gathered. Those numbers seem a little bit elevated for surveying less that 300 people but nonetheless it’s how the math added up.

The most surprising number is that only 69% of those who partook in the study were aware of any issues relating to the quality concerns of the iPhone 4. Of those 69% just 1 in 5 said those issues detracted them from buying the latest phone from Apple. People just don’t care.

It seems that the Verizon option is still the one aspect of the iPhone that potential buyers are still missing. If so then Apple better pony up on their promise of caring about each of their users. We haven’t heard a rumor in weeks as it relates to this idea so I assume we’ll hear something soon. Thoughts?