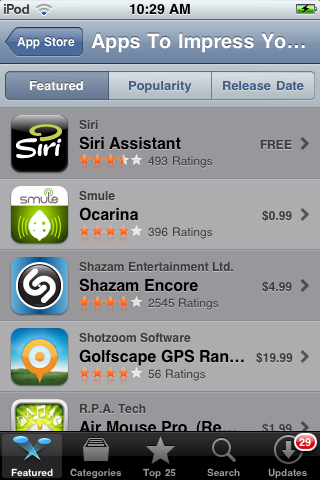 Have you been to the App Store lately? Over the summer, Apple has been creating sub groups of applications under the featured section, highlighting apps and placing them into specific genres. It is a good way of showcasing apps that are too good to jut be among the other 300,000. The latest category? Apps to Impress Your Friends With.

There is an obvious prerequisite of all those included in this unique category. Of all those making the cut, nearly all of them boast higher than a 3 star rating. They are also among the most complex of programs, especially on a phone.

So what are some of these impressive pieces of desirability? A few from each category: Shazam, Siri Assistant, and Red Laser are useful utilities mentioned. Real Racing, Madden 2011 and Touchgrind are of the sporting games. iMovie, Pano, and Hipstamatic are of the few camera enabled apps to make this seemingly prestigious list. There is another trend here. All of these apps, (and the others listed), work really well on iOS.

If Apple was to create a list of apps to convince someone to buy an iPhone, this would be that list. So while these apps may impress your friends of your phone’s ability, I think inspiring them to open their own wallets is what Apple has in mind. So head over to the App Store, and tell us how you would change this list.