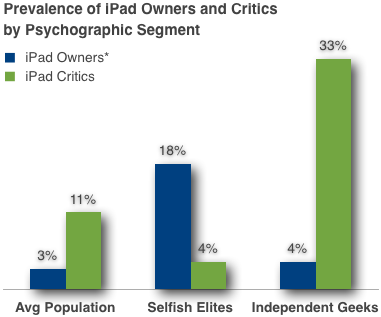 We already knew that iPhone owners are richer, younger and smarter than other smartphone owners and a new study now brings to light how selfish iPad owners are. Yes, you read that right, you’re selfish!

iPad Owners are an elite bunch.  They’re wealthy, highly educated and sophisticated.  They value power and achievement much more than others.  They’re also selfish, scoring low on measures of kindness and altruism.  As can be seen in the chart below, we found that people with all or most of these qualities, whom we call selfish elites, are roughly 6 times more likely to be an iPad Owner than the average person.

Ironically, those who are the most critical about the iPad don’t even own one. The survey shows that “independent geeks” that are “interested in video games, computers, electronics, science and the internet” are more likely to criticize the iPad than not.

How legit is this survey? I’m not sure and to be honest, I don’t think we should take it too seriously.