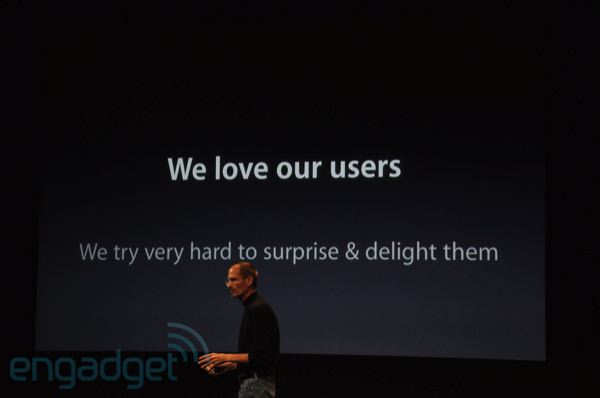 At the conference about the iPhone 4 antenna issue today, Apple announced that it will be giving away free cases to iPhone 4 owners. Even though they don’t admit that the iPhone 4 has a problem with the antenna, Apple said they do all this because they love their users.

If you look at the transcript of the conference, it’s actually clear that  “we love our users” was the message Apple wanted to get across.

When asked if Apple had learned anything from this debacle, Steve Jobs replied:

There are some things we know that we did learn here. One thing is how much we love our customers and how we are going to take care of them. We were stunned and upset and embarrassed by the Consumer Reports stuff, and the reason we didn’t say more is because we didn’t know enough. If we’d have done this event a week and a half ago, we wouldn’t have had half the data we have today.

Hmm. I have a hard time believing Apple would have done anything if Consumer Reports hadn’t brought the antenna issue to the mainstream. After all, Steve was pretty quick at telling people the iPhone had no problem at all and that we were holding it wrong. He didn’t seem to need any “data” at the time.

Besides, what kind of data does Apple have right now? The fact the iPhone 4 drops only one call per 100 more than the iPhone 3GS? Did it take Apple 3 weeks to figure this out? If anything, this data should prove that the iPhone 4 antenna is worse than the 3GS’.

When Ryan Block from GDGT asked how does touching the corner with a single finger seem to cause this issue? It’s not just a grip, it can just happen by touching a single finger. Bob Mansfield replied, completely avoiding the answer:

Your body is a pretty effective signal absorber. When you make contact with that phone, its performance in contact with you is less than its freespace performance. It’s a way to attenuate the signal by some amount.

This doesn’t answer the question. Apple can demonstrate how other smartphones drop signal by gripping them but you don’t need to grip your iPhone 4 to make it drop signal. You just need to put one finger on it.

To me Apple didn’t address the issue at all today. They didn’t admit their product was flawed. All they are doing is calming people down with free cases.