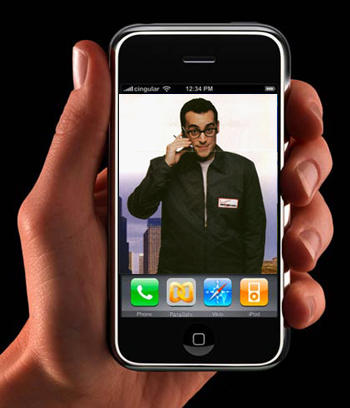 While we, here at the blog, don’t typically chime in on the endless next-gen iPhone rumors, I felt compelled to do so on this particular piece of gossip. Talk about an Apple iPhone on the nation’s largest network dates back to, well, the origination of the iPhone.

In fact, legend has it that Apple had originally approached ‘Big Red’, with the iPhone, exclusivity and all, and they turned it down. Now why exactly a cell phone carrier would want to turn down the opportunity to add 4% of their competition’s customers to their network is up for speculation. Reported reasons have ranged from Apple’s phones not having a removable battery to the lengthy warranty process for malfunctioning devices.

Fast forward to 2009. The iPhone had sold in record numbers, but Verizon definitely didn’t go home and eat Ben and Jerry’s and watch chick flicks. With a struggling smart phone line up consisting of aging Blackberrys and Windows mobile devices, they struck up a friendship with search engine and now mobile giant Google. Interesting.

Interesting because today they now carry 5 Android handsets with more promised later this year, as well as confirmed reports that the two are collaborating on a tablet device. Throwing an iPhone and other Apple products (iPad?) into the mix will be like putting a scorpion and brown recluse in a glass jar together and watching them fight. Giving customers freedom of choice between the 2 would produce interesting results.

Another fact to consider is that we have all seen the photos of at least a prototype of the next iPhone and the device appears to have a front facing camera. Before you go and dismiss this as a ‘for self portraits’ kind of camera, better check your tech blogs a little closer, tons of developers and home brewers have already discovered tons of evidence in the code of the new iPhone 4.0 software pointing to video chat.

Nationwide video calling would be pretty sketchy on a 3G network, no matter how fast or reliable. But Verizon is definitely making noise with its LTE network it plans on rolling out in a handful of markets later this year. Still sounds like we are a year or 2 away from it being anywhere close to nationwide, would Apple waste time making a CDMA handset available this summer with LTE on the horizon? I suppose theres a possibility of a dual band 3G/LTE  iPhone.

But none the less all of my  skepticism get sidetracked by all the latest gossip that streams through my RSS Feed reader. CrunchGear is reporting that they have received tips that an advertising agency is working on an advertising campaign for Verizon and new iPhone HD. Not to mention numerous Verizon Wireless employees reporting that they are blocking out vacation dates around Father’s Day weekend but their not saying why.

If you’re asking yourself “Cody, what do I make of all of this information?” You’re asking the wrong person, I’m about as on the fence on this one as they come. Unless you’ve been hiding under rock for the last year, you are aware that AT&T has been reporting customer complaints in all of its larger markets for dropped calls, no service, and slow data speeds.

They have been long since criticized for their older network infrastructure  not being able to handle the millions of new iPhone customers they have added. You should also know that the original 5 year contract AT&T and Apple signed in 2007 has been publicly reported to have been renegotiated to expire this summer, June 2010 to be exact.

Putting their phones in front of  an industry leading 90,000,000 wireless customers would seemingly be a smart business move for Apple. But only time will tell, and the clock couldn’t possibly tick any slowly on our count down to Apple’s June event. In the meantime, post some comments, I will try to put any updates I find on this topic in the comments section!