Today was a big day for Apple. As we told you about earlier this week, they were holding an event on their campus about the future of iPhone OS. Steve Jobs was here to lead the presentation, which as usual started by throwing some big numbers in our face (450,000 iPad sold, over 600,000 books downloads, 3.5 million iPad apps downloaded, 185,000 apps in the App Store, etc…). 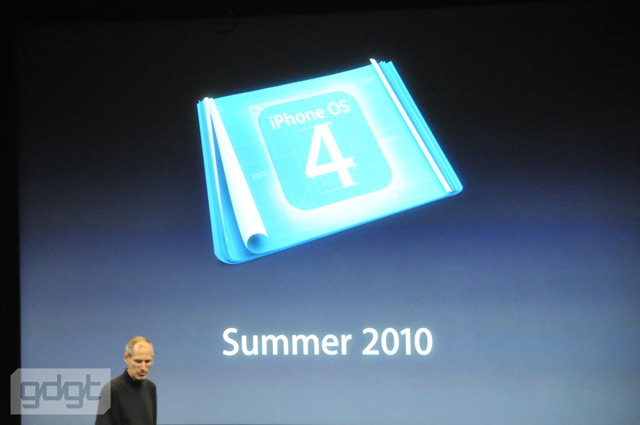 After making the crowd go WOW for a few minutes, Steve-o, loyal to himself, started the presentation about iPhone OS 4.

Here is everything you need to know about iPhone OS 4 (all images are compliments of gdgt):

iPhone OS 4, will come with many many new features. With over 1,500 new APIs for devs, chances are there will be a little something for everyone. 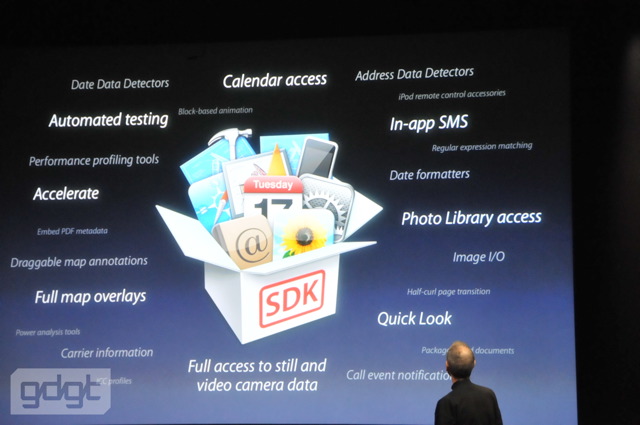 Although iPhone OS 4 will come with hundreds of new features, the presentation was focused on 7 of them. 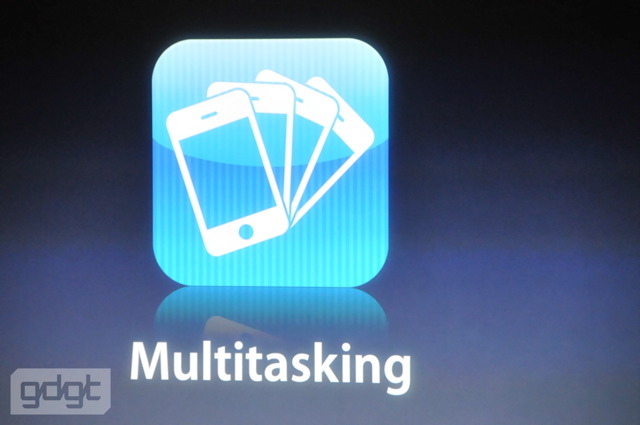 This is a given one that I had predicted since last year (hey no applause for me here, please hehe). As steve Jobs said, “We weren’t the first to this party, but we’re going to be the best”, and I believe him.

Dudes from Pandora and Skype came up on stage and demo’d their apps in action, running in the background. If you’ve seen Backgrounder and Proswitcher, you won’t be amazed by that. I guess the real asset of Apple’s new multitasking is that it’s been developed to not feel sluggish or drain the battery, which you might have experienced with apps like Proswitcher.

It is unclear how multitasking will work for the user. Time will tell. But when asked how you will be able to close apps, Steve said that “users shouldn’t have to ever, ever, ever think about that stuff”. 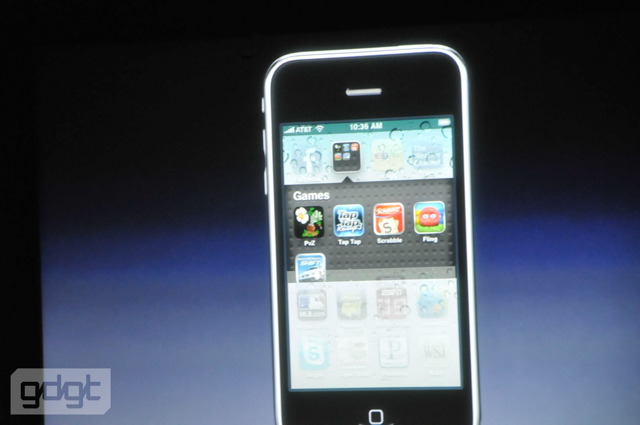 Very much inspired from the jailbreak app Categories, Folders will give people the ability to organize their apps better.

Apple added a beautiful UI that allows you to drag and drop your apps in folders. The folder name is automatically created but can of course be edited. Up to OS 3.X, you were able to have 180 apps on your iPhone over 11 pages. If you replace every one of those with a folder, you’re now going to be able to see 2,160 apps!

This is another big one that I’ve wanted to see for a while: the unified inbox. 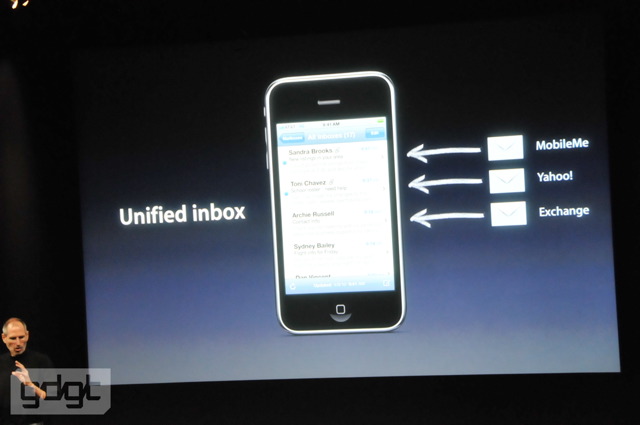 You can now have all your emails from different accounts come in one unified inbox. Obviously, you can still switch to a specific inbox if you wish too. Additionally, iPhone OS 4 allows you to add multiple Exchange accounts (no more hack needed).

Finally, Apple added the ability to sort your emails by thread, pretty much like Gmail does. 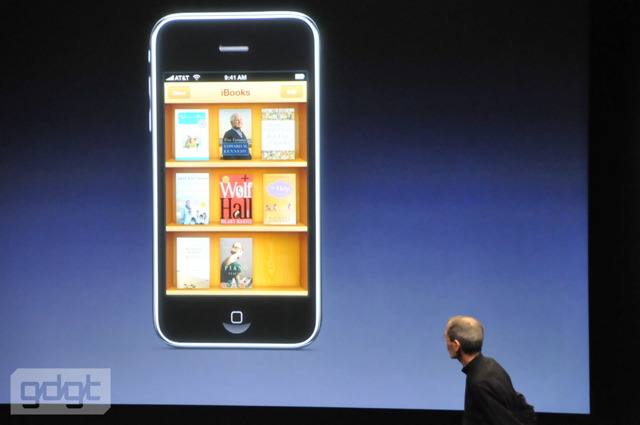 This is one I really don’t care about. I guess many people do though, and that’s yet another opportunity for Apple to sell you something (ebooks).

Not much was said about iBooks. Basically they brought it from the iPad. Nothing exciting… 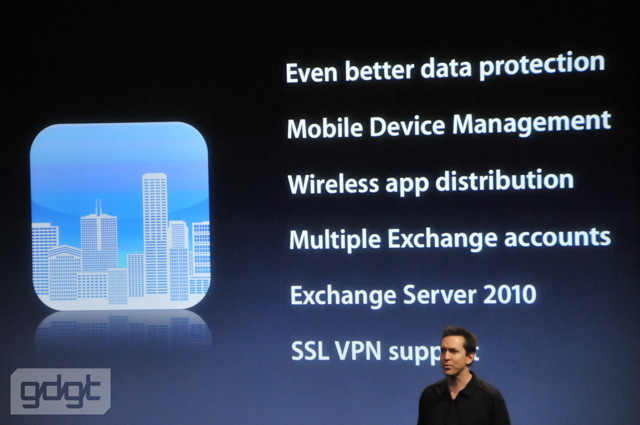 A bunch of features for companies that no one except businesses really care about. My favorite is wireless app distribution which allows a company to wirelessly distribute an application anywhere in the world with their own servers. 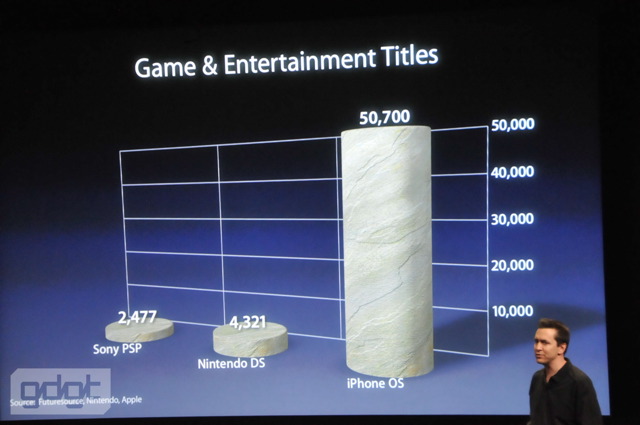 Again, nothing really groundbreaking here. Apple added a social gaming network that does automatic matchmaking, find others with a similar ability and match them against you.

This is the big fish of the day. While you probably won’t give a damn about iAd, let me tell you this: iAd is the reason why I bought a crap load of Apple stocks… 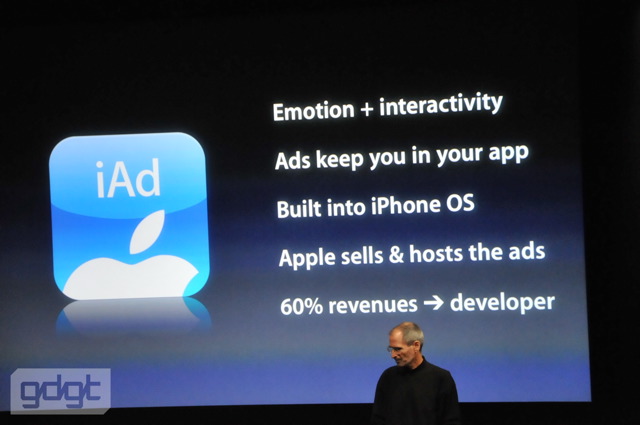 With almost 100 million devices sold, Apple can now serve about 1 billion ads per day (10 ads per device per day — about the same as a TV show). According to Steve, the problem with ads on mobile devices or on the web is that they’re not capable of delivering emotions. Apple will change this!

People don’t click on ads because they don’t want to be taken away from what they are doing. Because iAd is in the OS itself, Apple figured out how to do interactive and video content without ever taking you out of your app!

They demo’d a few ads that you have to see for yourself as it can’t really be translated into words. So wait for the presentation video to show up on Apple’s website and look at it if you’re interested. All the ads are made in HTML 5 (take that Adobe Flash!).

iAd is definitely a big kick in Google’s nuts!

One thing I forgot to add in there is that you’ll now be able able to add custom backgrounds to your home screen. That’s not really the theming many of us expected, but that’s a start.

Apple will be releasing a developer preview of iPhone OS 4 today at developer.apple.com.

What does that mean? That means that if you have anything but the new iPhone that’s coming out this summer, these new features will suck for you. Sorry to say it so plainely but I want to be clear. These features were designed with the new iPhone and its kickass new processor in mind so if you have an older device, don’t get too excited. Obviously Steve didn’t say that but it’s me translating Jobs talk.

All in all, I’m not impressed by this presentation as I expected much more from iPhone OS 4 but let’s not forget this is just a developer presentation and there is still a few months until the launch of the next iPhone. Like the teaser said, this was just a sneak peek at the future of iPhone OS. Something tells me there is much more to come in the next few months.

Thanks to gdgt for the amazing live blogging and for the images.