Backing up your SHSH blobs is an integral part of the jailbreaking philosophy. Without them, it’s a sure bet that you won’t be able to downgrade your firmware in the future when Apple releases updated firmware and stops signing the old.

Fortunately, there is a way to downgrade regardless of whether or not Apple is signing the firmware. To do that, though, you’ll need your SHSH blobs from that firmware.

The latest version of iFaith is 1.4.1 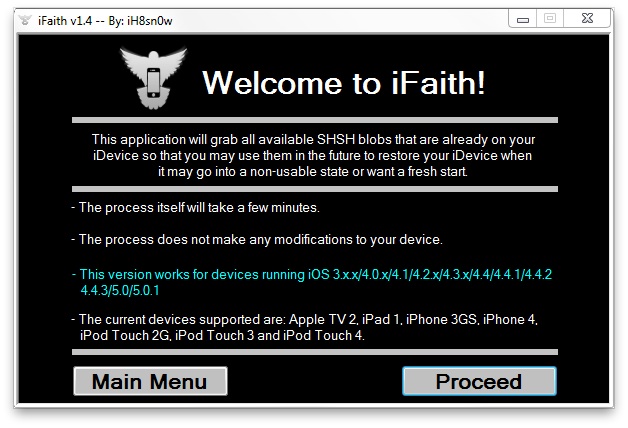 iFaith, like the more famous TinyUmbrella utility, is a tool that allows you to save your SHSH blobs for later use. But that’s pretty much where the similarities end. While TinyUmbrella fetches the SHSH blobs from Apple’s server, iFaith will extract them directly from your device.

Unlike TinyUmbrella, iFaith features the ability to create custom firmware (IPSW files) that are stitched together with your SHSH blobs. In theory, this allows you to downgrade firmware in the future using a standalone firmware file.

iFaith also differs from TinyUmbrella because it ties into its own caching server, while TinyUmbrella relies on Cydia’s server for retrieving SHSH blobs.

Lastly, iFaith features the ability to boot into PwnedDFU mode, which is a special type of recovery mode that’s necessary for iTunes to recognize and restore to custom created firmware. 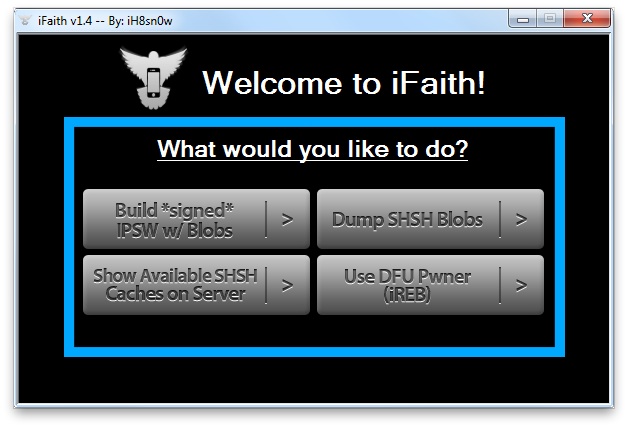 For simplicity’s sake, just think of iFaith as a mix of TinyUmbrella and RedSn0w. Admittedly, that’s quite a bit to chew on, so we’ll take it step by step and break iFaith down into several important parts below.

iFaith is a Windows only tool.

What devices and iOS versions Can Use iFaith?

iFaith is an application that will take all of the available SHSH blobs that reside on your iDevice so that you can use them in the future to restore your device to a particular firmware, even if Apple is no longer signing that firmware.

Yes, this has been confirmed by the developer of iFaith, iH8sn0w.

You can download the latest version of iFaith in our downloads section. The original version of iFaith debuted on June 2nd, 2011. iFaith was most recently updated on December 4th, bringing with it support for iOS 5 and APTicket backup. This latest update is significant because, if done as a preventive measure now, it will allow iOS 5 users to create signed firmwares that they will be able to use to downgrade in the future. This was not possible with any previous tool.

Save Your SHSH Blobs and Create Custom Firmware with iFaith

And that, folks, is iFaith. It’s a great tool for Windows users, and a life saver for those of you who may want to downgrade your iPhone firmware in the future. Let us know what you think about iFaith in our forums.