It’s hard to get excited about a new wireless charger for iPhone in 2022. I mean, we’ve all seen our fair share of round or square-shaped devices on which you can lay your iPhone to wirelessly charge it. So at this point, the main thing that can set a charger apart from all the rest is design.

So when Nomad emailed me about their new Base One charging station, I paid close attention, because when the fine folks from Santa Barbara, California release a new product, it’s often with a different spin on things. 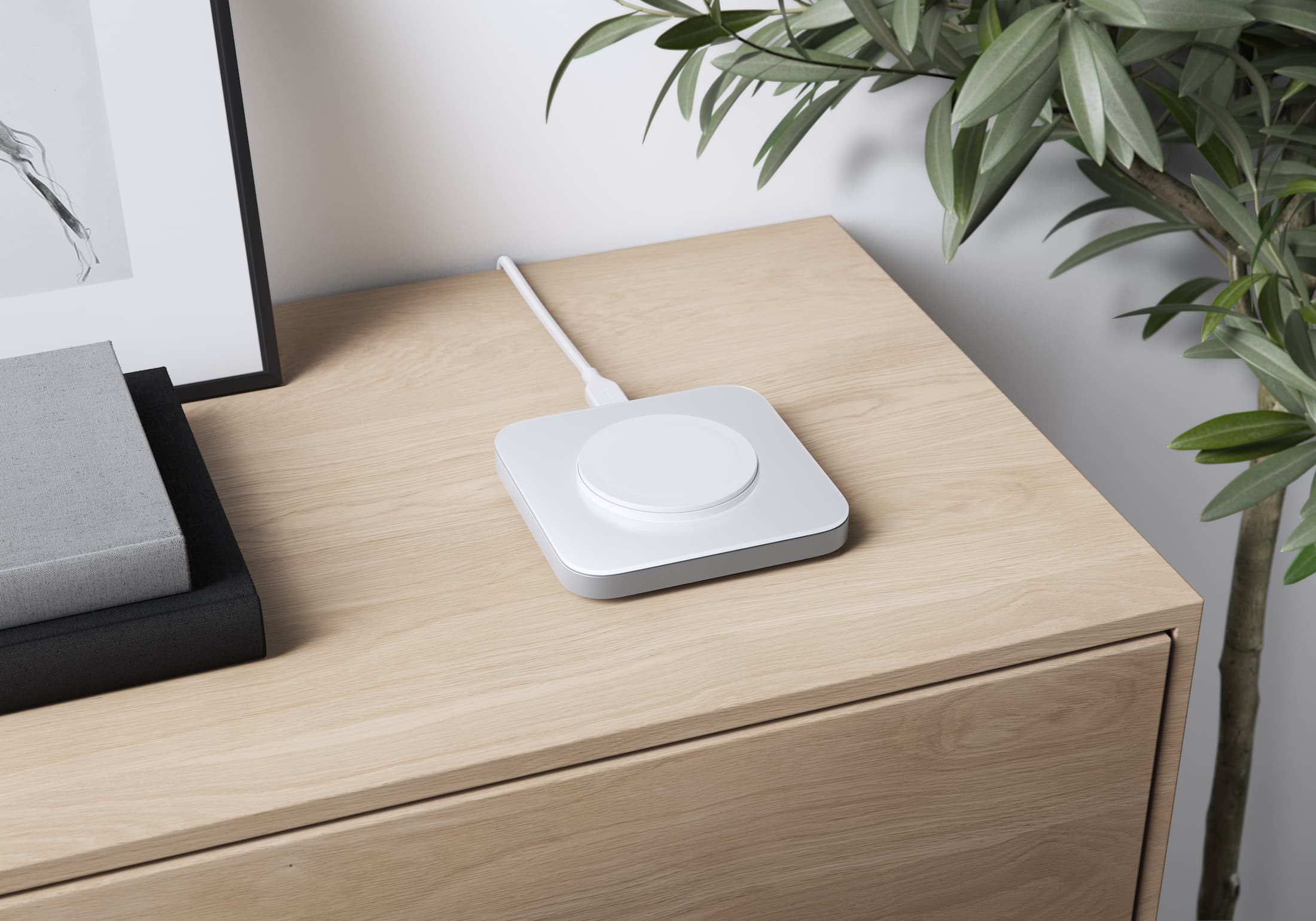 Yes, the Nomad Base One is yet another magnetic charger, but this one is the premium option when it comes to this otherwise crowded category.

First, one should note that the Base One is an official MFi MagSafe charger. This seal of approval by Apple makes a world of difference when it comes to the nitty gritty details of charging speeds. You see, any non-MagSafe wireless chargers available on the market can only charge your iPhone at a maximum of 7.5 watts. However, official MagSafe chargers like the Base One can deliver a faster wireless charging rate of 15 watts.

While not necessarily important if you simply charge your phone overnight, it can make a big difference if you’re trying to juice up your device in smaller increments during the day.

The Base One comes with a 6-foot USB-C cable. However (and I learned that the hard way) you will have to provide your own 30W charger. Anything short of that, and you won’t be able to deliver enough power to the Base One for it to even begin charging your device.

Now onto the physical aspect of the device, which is where it really stands out.

Base One comes in two beautiful colors: Silver and Carbide Gray. It features a floating glass surface, sitting on a full aluminum chassis. The embedded official MagSafe charging puck is slightly protruding from the base to allow for the massive camera system of the newer iPhone Pro to not get in the way.

Some of you may have had bad experiences with wireless chargers and the new camera system of the iPhone 13 Pro. I know for a fact that a couple of the wireless chargers I was using would simply not allow my iPhone 13 Pro to lay flat on them because of that ginormous camera bump. This simply is not the case here.

I’ve been using a MagSafe wireless charger since day one, and one thing that really bothered me was that anytime I would pick up my phone from the charger, the charger would come with the phone. I quickly found a $0.05 workaround, but it was never an elegant solution.

Weighting just over one pound, the Base One is the elegant solution. The notable weight makes it so that the station doesn’t move one iota when you pick up your iPhone. Of course, the trade off is that, well, it adds weight to the device, but it also makes it significantly thicker than most chargers out there.

Priced at $129.95, I can see why it would make you spit out whatever beverage you may have been drinking while reading this. Yes, it is expensive. Especially when you can get dozens of magnetic wireless chargers under $20 on Amazon all day long.

But let’s be honest here. Anyone looking at this product knowing it’s coming from Nomad knows what to expect. The company has been the maker of premium accessories for Apple products for years. By approaching product design from a different angle, Nomad has crafted a niche for itself in this crowded market that has been flooded by cheap plastic products.

Still, at this price point, I am a bit upset that I either have to provide my own 30W power brick of buy a new one. Nomad tries to appease this by offering their 30W charger at half price to people who would like to bundle the two products. Yet, that’s added cost that I could do without, especially when the competition does include a 30W charger in the box.

So expensive it is, but we all knew this coming in.

Why would you buy a Rolex Submariner for $10,000 when you can buy a similarly-looking Seiko for $150? Both look the same. They both give you the same time. But I’ll tell you why you’d prefer the Submariner… It’s because you want the best money can buy.

What is it worth to you? If it’s worth $129.95, then you can buy the Base One directly from Nomad’s website. It comes in either Silver or Carbide Gray, and includes a premium USB-C nylon braided cable. It is shipping now.