Proponents of the Sileo package manager for jailbroken iPhones and iPads will be in for quite the surprise this Saturday morning, as the Sileo Team appears to be pushing a notably significant new public beta update for the app in the form of version 2.2.

The Sileo Team made an announcement about it via Twitter this morning that points to a separate announcement about it that was shared in the Sileo / Taurine / Odyssey Discord channel. It’s the latter that discusses the particularly long list of changes that the Sileo Public Beta v2.2 brings to the table for those who choose to install it.

Sound interesting? We thought so! The full details below: 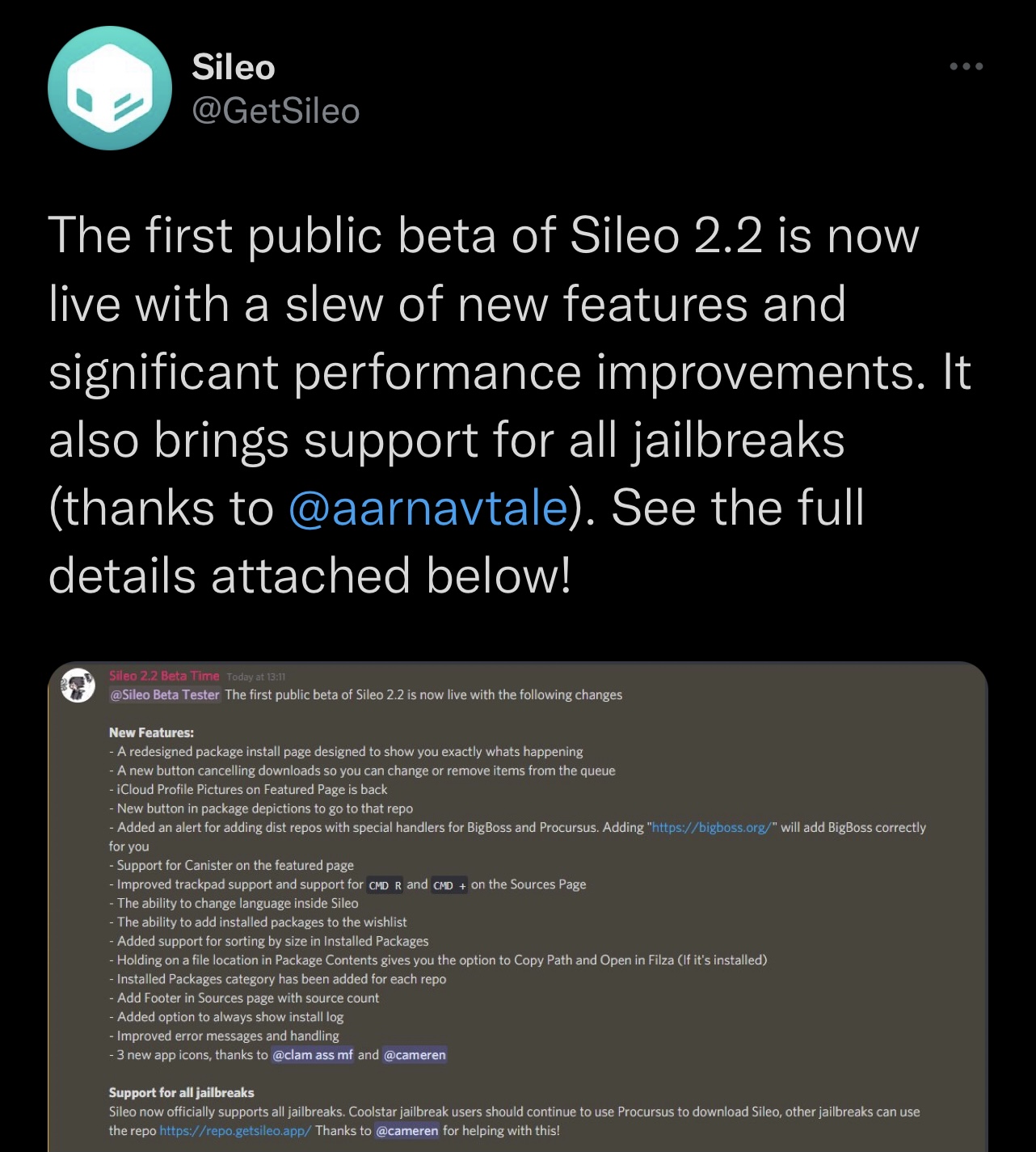 The change log for Sileo Public Beta v2.2 is rather extensive, but comprises of the following:

– A redesigned package install page designed to show you exactly whats happening
– A new button for cancelling downloads so you can change or remove items from the queue
– iCloud Profile Pictures on Featured Page is back
– New button in package depictions to go to that repo
– Add alert for adding dist repos with special handlers for BigBoss and Procursus. Adding “https://bigboss.org” will add BigBoss correctly
– Support for Canister on the featured page
– Improved trackpad support and support for `CMD R` and `CMD +` on the Sources Page
– The ability to change language inside Sileo
– The ability to add installed packages to the wishlist
– Added support for sorting by size in Installed Packages
– Holding on a file location in Package Contents gives you the option to Copy Path and Open in Filza (if installed)
– Installed Packages category has been added for each repo
– Add Footer in Sources page with source count
– Added option to always show install log
– Improved error messages and handling
– Three new app icons

Support for all jailbreaks

Sileo now officially supports all jailbreaks. CoolStar jailbreak (Odyssey, Odysseyra1n, and Taurine) users should continue to use Procursus to download Sileo, other jailbreaks can use the repo https://repo.getsileo.app

Lots of the core components of Sileo have been rewritten to give you a more fluid experience. This includes faster repo refreshes, faster queue load times, and no UI hitches. Sileo now uses significantly less memory. This is helped by increased caching and use of faster libraries for decompression and support for repos using `.zst`.

– Installed Packages may sort incorrectly at launch (re-select your sort)
– The New page may sit spinning forever (restart the app)
– If selecting a custom language in Sileo, some buttons may have the incorrect language
– Restart Sileo may not appear and will just show done, please restart Sileo manually
– Spamming Cancel Download may have undefined consequences
– Pressing clear queue may have undefined behavior
– Chariz may throw a hash error on refresh, refresh again to bring packages back
– Package Search doesn’t work when you go to the installed packages of a repo

The extensive list of changes above is a lot to take in, but it will all contribute to a more performant and satisfactory user experience when using the Sileo package manager to interface with jailbreak extension browsing and installations. Among the changes, one that really pops out to us is the “support for all jailbreaks,” which is rather important if you’ve been in the market to try Sileo but aren’t using one of CoolStar’s jailbreaks.

It’s important to reiterate that this is a public beta release. Although it brings lots of changes to the Sileo package manager app, it’s not yet an official release build. Beta software, including public beta software, generally tends to be buggier than the official final release, so that’s one thing you’ll want to keep in mind if you’re thinking about using the newly announced public beta (version 2.2). This isn’t an attempt to discourage users; rather, just a fair warning.

Assuming public beta testing goes well, these changes should be present in an official public release in the future. We’ll continue to keep you updated of any developments pertaining to such a release.

Will you be downloading the new Sileo public beta on your jailbroken iPhone or iPad? Let us know why or why not in the comments section down below.