Valve’s released a macOS version of its Steam Link app to let people stream their Steam libraries from their gaming PCs to Mac computers and other devices running the software. 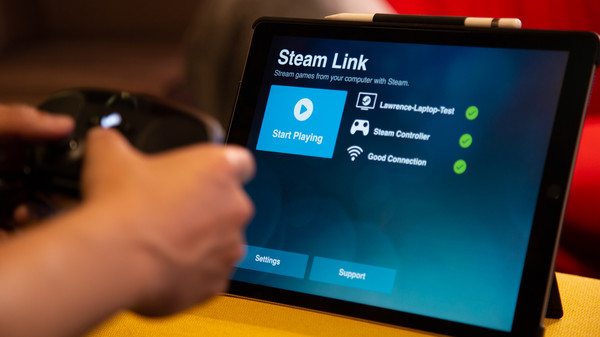 Stream Steam games on your Mac

The company’s Steam Link app has been available on the iPhone, iPad and Apple TV for some time now. And now, it’s available on the Mac, too. With the app running on your Mac, and another computer running Steam, you can play Steam games using an MFi or Steam controller on your Mac. Both computers must be connected to the same local network.

The Steam Link app allows you to play your Steam games across all your computers. Just pair an MFI or Steam controller to your Mac, connect to a computer running Steam on the same local network, and start playing your existing Steam games.

Valve recommends that computers be connected to the router via Ethernet to minimize delays. But why not use Steam on your Mac instead?

MacRumors has the answer to that:

Steam users have been able to stream games from within the Steam Mac app for sometime. However, with the availability of Steam Link on macOS, users now have the option of choosing a lightweight download (29.8MB) to stream games to their Mac, rather than having to install the Steam app proper, which requires 1GB of drive space.

All the processing is done on the other computer, meaning your Mac basically acts as a thin Steam client that displays a video stream of in-game action and parses input.

Steam Link is available on the Mac App Store.

Steam Link was introduced with the launch of a dedicated device back in November 2015. While the hardware is no longer sold, the software has continued as an app for various platforms. At the time of this writing, the Steam Link software was readily available on iOS, iPadOS, macOS, tvOS, Linux, Android, iOS, Raspberry Pi and compatible Smart TVs.