Facebook in the past two days took out two full-page ads in major US newspapers to try to push regulators into taking action against iOS 14’s new ad-tracking controls, and now the iPhone maker’s chief executive has responded to these attack ads with a tweet about privacy.

“We believe users should have the choice over the data that is being collected about them and how it’s used,” Cook wrote on Twitter. “Facebook can continue to track users across apps and websites as before, App Tracking Transparency in iOS 14 will just require that they ask for your permission first.”

And that’s precisely what Facebook’s public brawl with Apple boils down to! 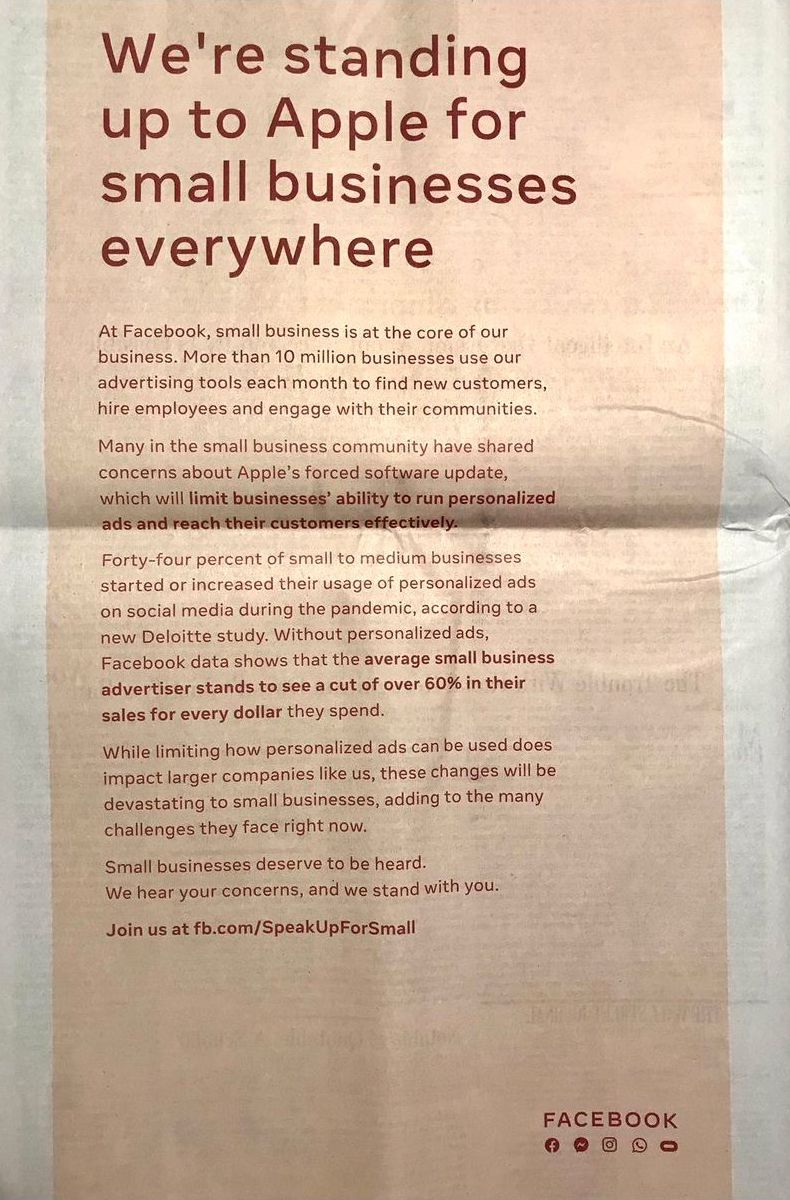 The attack ads were published in the New York Times, Wall Street Journal and Washington Post under the headline “We’re standing up to Apple for small businesses everywhere.” The public campaign is linked to Facebook’s “Speak Up For Small Business” webpage where the company presents its case and provides testimonial videos highlighting small business owners who discuss why they’re worried about Apple’s changes.

MacRumors has more on that:

Apple introduced a number of privacy changes that curb the ability of companies like Facebook to gather data on users and target adverts. In iOS 14, Apple has made the Identifier for Advertisers, used by Facebook and its advertising partners for ad targeting. It’s an opt-in feature that provides more transparency for users who would prefer not to be tracked in apps and on websites. The update simply asks users if they want to agree to ad tracking or prevent cross-app and cross-site tracking to provide targeted ads.

Pictured below is the new privacy screen that Facebook is afraid of. Found in Settings → Privacy → Tracking, the new Settings section provides a single switch labeled with the text “Allow Apps to Request to Track”. When switched on, this will permit apps to “track your activity across other companies’ apps and websites”. 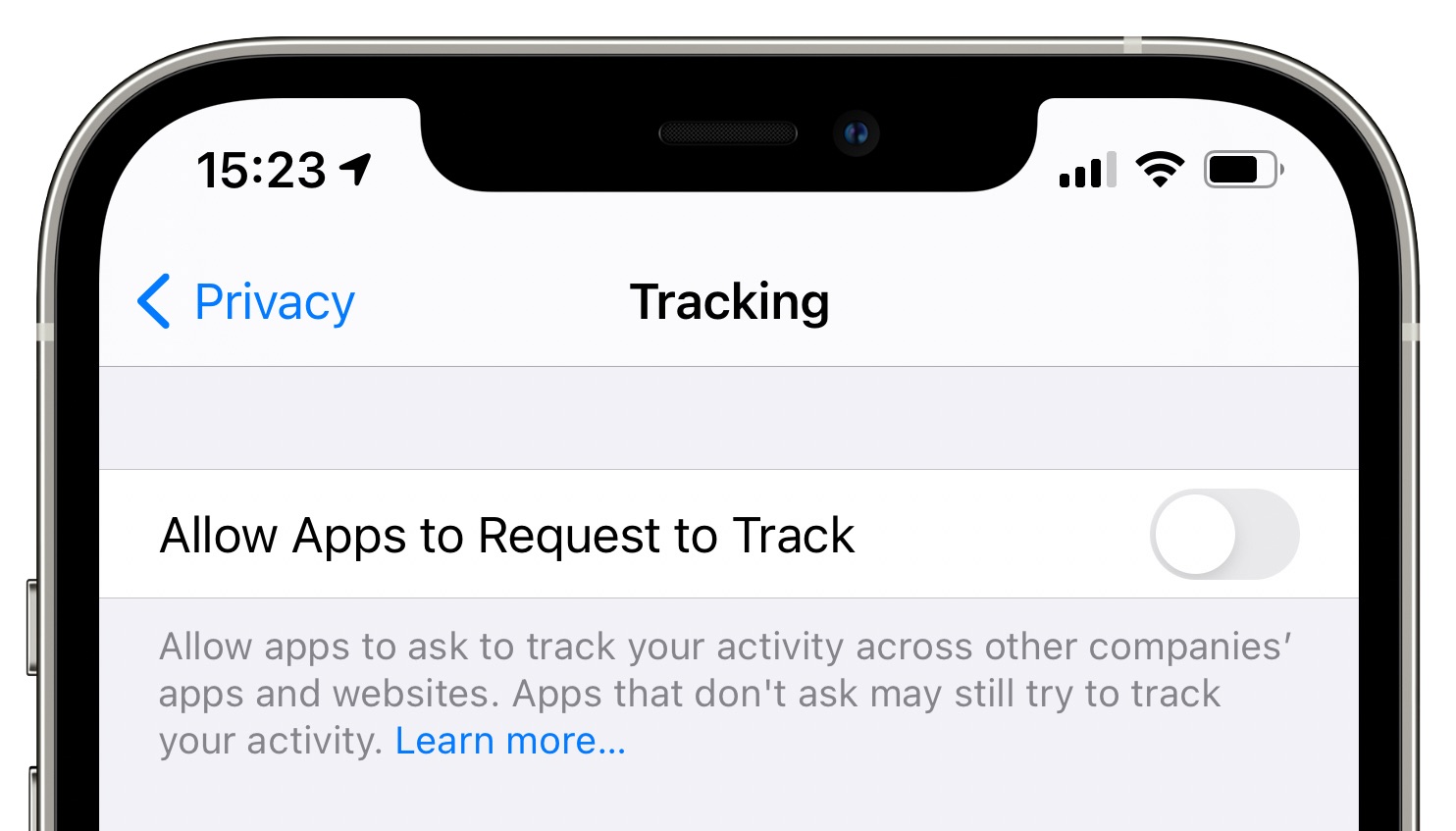 Facebook is basically whining because ad tracking the iOS and iPadOS software went from an opt-out feature in iOS 13 to an opt-in in iOS 14. Facebook, like Apple, understands that not many people will want to bother to enable ad tracking in iOS 14. Apple does caution in the feature’s description that apps and websites that don’t ask may still “try to track your activity”.

iOS 14 also has a prominent Tracking section in the Privacy portion of the Settings app, where users can disable the option for apps to track them altogether. Even if this feature is toggled off, apps must still ask permission to track users across apps and websites owned by other companies, which is a blow to the silent ad-related tracking that has been going on behind the scenes.

A full-page newspaper print ad for issue messaging has always had a weird target audience. Most full-page newspaper ads are trying to reach most of the people who read the paper. Full-page issue messaging ads are about reaching very specific demographics in a conspicuous way. But in today’s world, it’s kind of transparent whom Facebook is targeting here: old white politicians.

Former technology columnist Walt Mossberg pointed out that Facebook shouldn’t be afraid of Apple’s privacy opt-in panel that the user will see whenever an app, any app, tries to track them.

This is a prototype of the opt-in panel @Apple plans to show users for every app (not just @Facebook) that wishes to track users. It merely allows users to choose whether or not to okay tracking. So, if FB tracking is fair, open and helpful, why is it so afraid of this pop-up? pic.twitter.com/5XBxSOfUsG

“It merely allows users to choose whether or not to okay tracking,” he wrote on Twitter. “So, if Facebook tracking is fair, open and helpful, why is it so afraid of this pop-up?”

The king of privacy theft, @Facebook, is running ads attacking @Apple, the leader in privacy protection. All because Apple is shifting to an opt-in system from an opt-out system for users to allow data sharing with advertisers. FB must fear folks won’t opt in. I wonder why.

Separately, Apple’s new privacy “nutrition labels” that recently went live in the App Store inform the user about the extent of an app’s data collection and what their data will be used for.

That feeling when a video is needed to show how long you have to scroll just to see all the ways Facebook is tracking us 🤔https://t.co/AhyTjwxxwa