Every year, Apple introduces a new A-series processor for devices like the iPhone and iPad. And every year Apple touts the performance gains. Qualcomm does the same, of course, but it may not have that much to brag about next year — compared to Apple, anyway.

Today, Qualcomm confirmed that the next flagship processor for mobile devices will be the Snapdragon 888. It will be the processor that gets tucked inside premier handsets like Samsung’s upcoming Galaxy S21 Ultra and other flagship phones with Google’s mobile OS. However, as revealed today by AnandTech, Qualcomm’s processor can’t quite keep up with the new A14 Bionic processor Apple launched earlier this year.

The early benchmarks for the unreleased processor show it doing fairly well, all things considered. However, when compared to the A14 in the iPhone 12 — and even the A13 in the iPhone 11, it doesn’t quite square up. The Snapdragon 888 managed to get a single-core score of 1,135 and a multi-core score of 3,794. 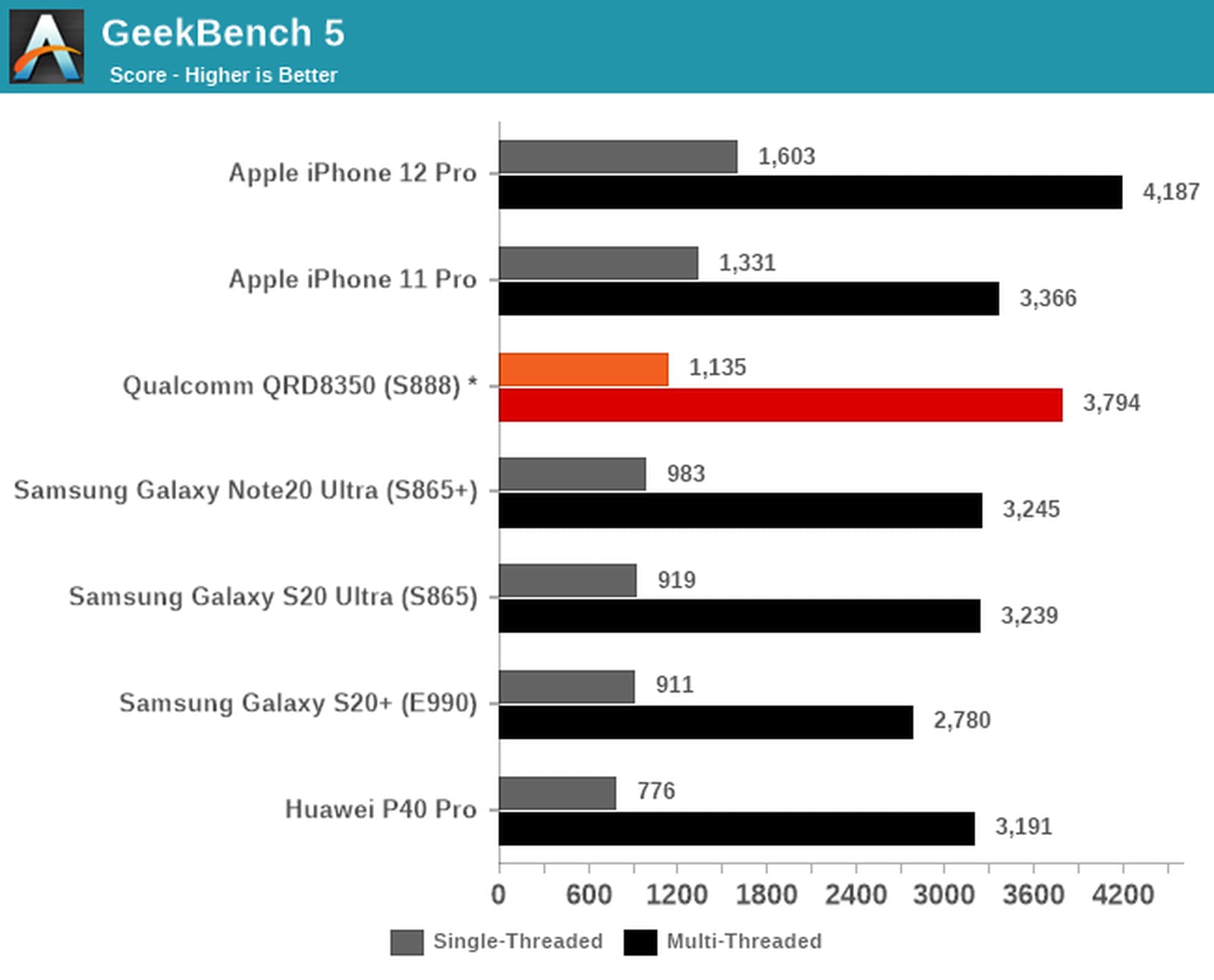 There was a second test done as well, this one to try out the GPU,via GFXBench. In that case, the Samsung model equipped with the new processor earned a score of 86 fps, while the iPhone 12 Pro earned 102.24. The only benchmark we don’t have at this point is sustained performance for the new processor.

While the Snapdragon 888 doesn’t look like it’ll match the peak performance scores of the A13 or A14 SoCs used in Apple’s iPhones, sustained performance will depend quite a bit on the power consumption of the chip. If this lands in at between 4 and 4.5W, then the majority of flagship Android phones in 2021 will likely be able to sustain this peak performance figure and allow Qualcomm to regain the mobile performance crown from Apple. Otherwise if the chip has to significantly throttle, then 888 will probably fall short of retaking the crown. But even if that’s the case, for Android users it shouldn’t matter too much: the generational leap over 2020 phones would still be immense, and by far one of the largest GPU performance leaps Qualcomm has been able to achieve to date.

It’s worth saying here that while the A14 (and A13) are outperforming Qualcomm’s latest generation processor, it’s still a big boost for Android owners who pick up the newest flagship Android phones in 2021. The Snapdragon 888 is an impressive processor in its own right, and it certainly won’t be a slouch in those future smartphones.