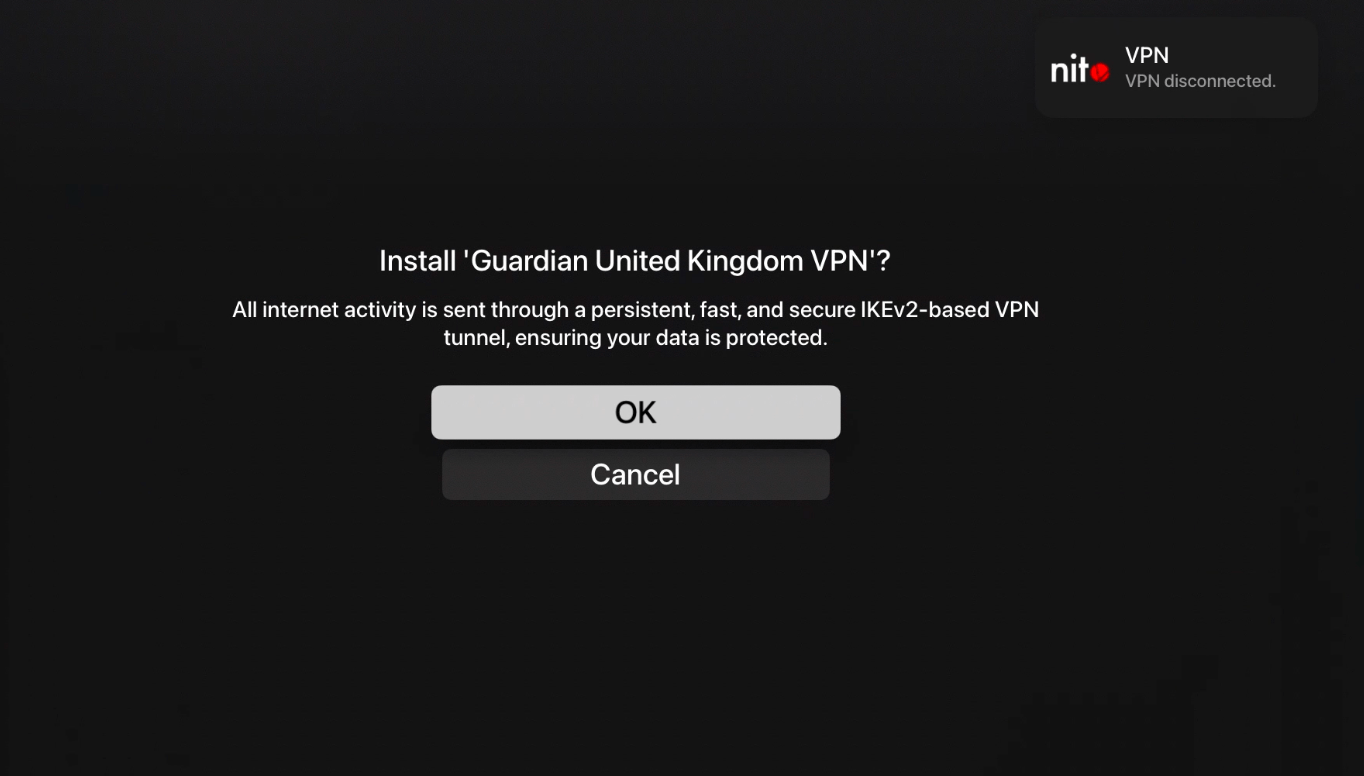 About a month ago, Guardian Firewall VPN founder and CEO Will Strafach, a former member of the Chronic Dev Team, shared a particularly exciting announcement in that nitoTV (now going by @freenitoTV on Twitter) had gotten VPN connections working on the Apple TV platform for the very first time; albeit with a jailbreak.

The aforementioned jaw-dropping feat demanded tons of complicated hackery, but after lots of research, development, testing, and refinement, the project, officially dubbed “vpnd,” is now available for jailbreakers who might want to try their hand at configuring a VPN connection on their own Apple TV.

In a nutshell, vpnd is effectively a VPN daemon that can be utilized by nitoTV on jailbroken Apple TVs to deploy access to VPN connections on the platform. Both nitoTV and Breezy have already been updated for jailbroken Apple TVs to accept AirDroped mobileconfig files, and these tools will assist those who choose to install this.

Installing vpnd on a jailbroken Apple TV isn’t for the faint of heart, however; even nitoTV says that getting it working can be a “huge and finicky pain” for those unfamiliar with how it works. With that in mind, nitoTV has taken the liberty of providing sample code in the README file so that users have something to work with.

In its current form, the project doesn’t offer much by way of detailed step-by-step installation instructions, but rather links to Apple’s own Configuration Profile and Apple Configurator web pages for reference. That said, much of it looks Latin to the untrained eye, but perhaps not to an experienced developer.

The entire vpnd project is fully open source on GitHub for anyone who might be interested in studying the work or attempting to get it working on their own Apple TV.

While we still don’t know exactly why Apple doesn’t provide first-party VPN support on the tvOS platform like they do on their iOS, iPadOS, and macOS platforms, vpnd offers a glimmer of hope that this won’t be the case forever – whether it takes a third-party hack or not.

Do you plan to go hands-on with vpnd on your jailbroken Apple TV, or does it seem too complicated yet in its current form? Let us know in the comments section down below.