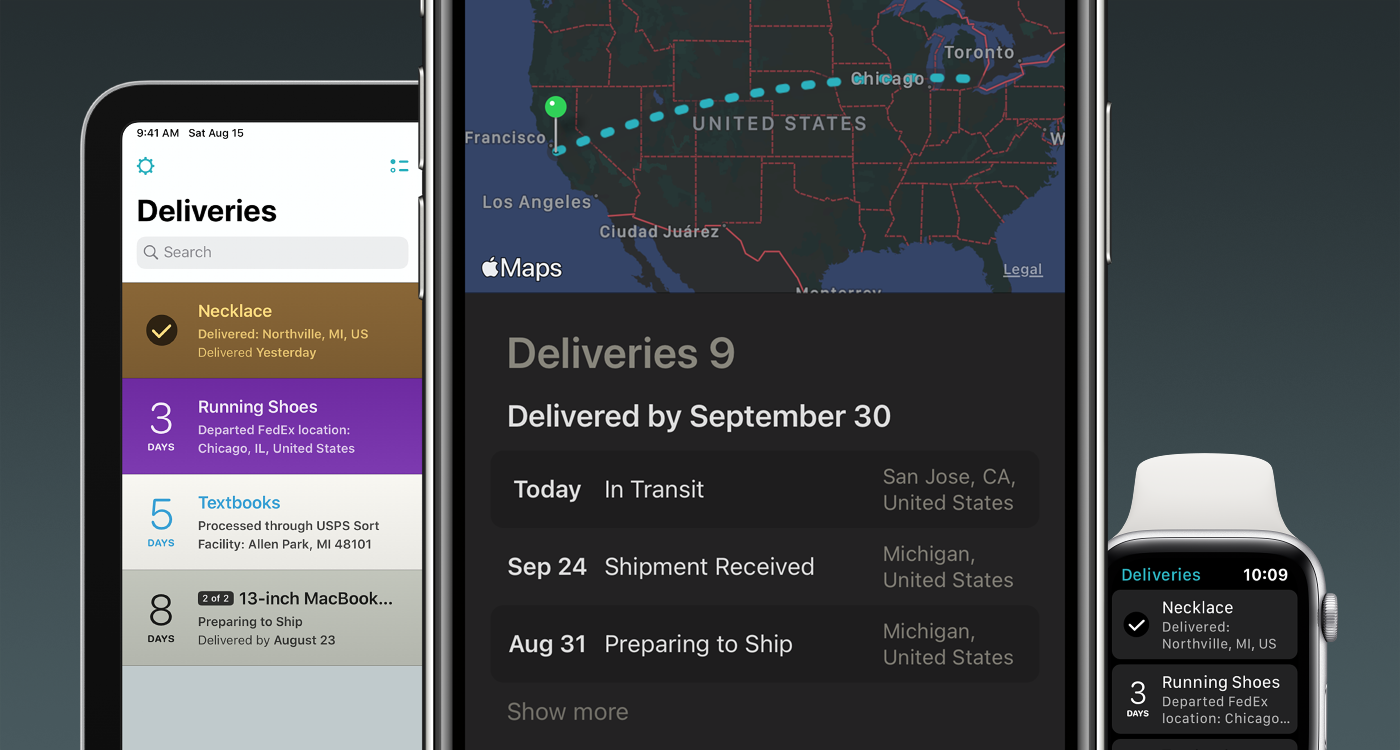 These unprecedented times we live in, driven by the uncertainty of the Coronavirus pandemic, have driven more people to resort to online shopping over in-store shopping than ever before. With so many online orders happening all at once, some may find it difficult to keep track of all their packages, and that’s one reason why I use the Deliveries package tracking app from Junecloud.

Junecloud released a massive update for Deliveries on Wednesday, officially bringing the popular tracking up to version 9.0 for iOS, iPadOS, macOS, and watchOS and incorporating a plethora of much-needed upgrades including aesthetically pleasing interface tweaks and handy new features. If you’re already using Deliveries, then this is an update you won’t want to miss – and to those who aren’t… what are you doing with your life?

In case you aren’t familiar with Deliveries, it’s essentially one of the best ways to keep track of all your inbound packages in one place. It supports tracking numbers from various shipping services, including DHL, FedEx, UPS, USPS, and even Amazon, among many others. The app automatically organizes your packages by the expected delivery date and can even notify you as packages begin moving through the transit system.

The new Deliveries 9.0 update brings major advancements to the app. In iOS and iPadOS, version 9.0 adds the following changes:

– A fresh look: We’ve touched up every detail to make it easier to keep track of your shipments. Dark mode is included, and support for all text sizes is improved.
– Subscriptions: Try Deliveries for a month to see if it works for you, or subscribe yearly for a significant discount. One subscription gives you access to Deliveries on iPhone, iPad, Mac, and Apple Watch. If you previously purchased the app, you’ll still get most features for no extra charge. Learn more at juncld.com/subs
– Tracking history: For most services, the full history is shown in the app, and it’s archived with the delivery if you ever need to look it up.
– Easier to add deliveries: It’s faster to add new shipments, with improved suggestions, and an “import” option to add multiple shipments from popular sites.
– Drag and drop: Rest your finger then drag to reorder deliveries. On iPad, drop emails, links, or text onto the app to add shipments. You can also drag deliveries to other apps, like Files or Safari.
– Multiple selection: Tap and drag with two fingers to select, then archive or share several items at once. You can also use the select button to select items one at a time. If you accidentally delete something, swipe left with three fingers to undo, shake your device, or press ⌘Z on an external keyboard.
– Sync: Both iCloud and Junecloud are faster and more reliable. You can also use both, for the benefits of iCloud without missing out on Junecloud features like “Mail to Deliveries” and web access.
– Export: Save a complete backup of your active and archived items. Tap the gear icon, tap “Manage Your Data”, then “Export Deliveries”. You’ll get a single file with everything, so it’s easy to share or re-import later.
– Placeholders: Previously labeled “Other”, placeholders now include buttons to quickly edit them or mark them as delivered.
– Dates: The year is now shown for dates further away. On the details screen, tap on a countdown like “delivered in 5 days” to see the actual date.
– Item name suggestions: Type a few letters and Deliveries will suggest previous item names.
– Help with mistakes: As you enter information, small mistakes like extra spaces are cleaned up automatically. If you try to save a delivery with an invalid tracking number, the app will let you know, so you can fix the typo or choose a different service.
– Archived items: They’re no longer dimmed out, so they’re easier to read. You can also edit item names without restoring.
– Source details: Deliveries added through email or Safari now include information about where they came from. Tap to open the email or web page.
– Sorting: Your manual sort order now syncs with iCloud.
– Siri Shortcuts: The “check on a delivery” shortcut can now be used conversationally to check any of your active deliveries. In the Shortcuts app, the “Add a Delivery” action now accepts input, and most actions output information about your packages.
– Improved keyboard support: Use the arrow keys to select a delivery, or to select a suggestion when adding a new delivery.
– Quick Look: Exported files can be previewed in Spotlight or the Files app.
– Clipboard detection: Like before, Deliveries can automatically detect tracking numbers on your clipboard so you can add them easily. If you prefer, there is now an option to turn this feature off.
– The “Add to Deliveries” extension has moved—look for the color icon in the Share sheet.
– Data Matrix barcodes are now supported. These are sometimes used for Amazon return codes, for example.
– Many other improvements to performance and reliability.
– Note: iOS 13 or later is required.

As a longtime Deliveries user, I’ll admit that I was initially hit hard by the fact that what used to be a one-time charge paid app has now become a subscription-based platform. Some features, albeit not many useful ones, are available for free. The subscription unlocks all the features you want for the very fair pricing options of just $0.99 per month or $4.99 per year.

It’s worth noting that this update finally adds native dark mode, a feature that users have been requesting since iOS 13 dropped last Summer. Although one full year late, the wait was certainly worth it, as the app’s user interface has received so many upgrades in the form of more detailed tracking history, Drag and Drop support, multiple selection, Siri Shortcuts, and much more.

Deliveries is a universal app for the iPhone and iPad in the App Store with support for the Apple Watch. The Mac-centric version of the app is available separately from the Mac App Store.

Do you plan to use Deliveries to keep track of all your packages? Discuss below.