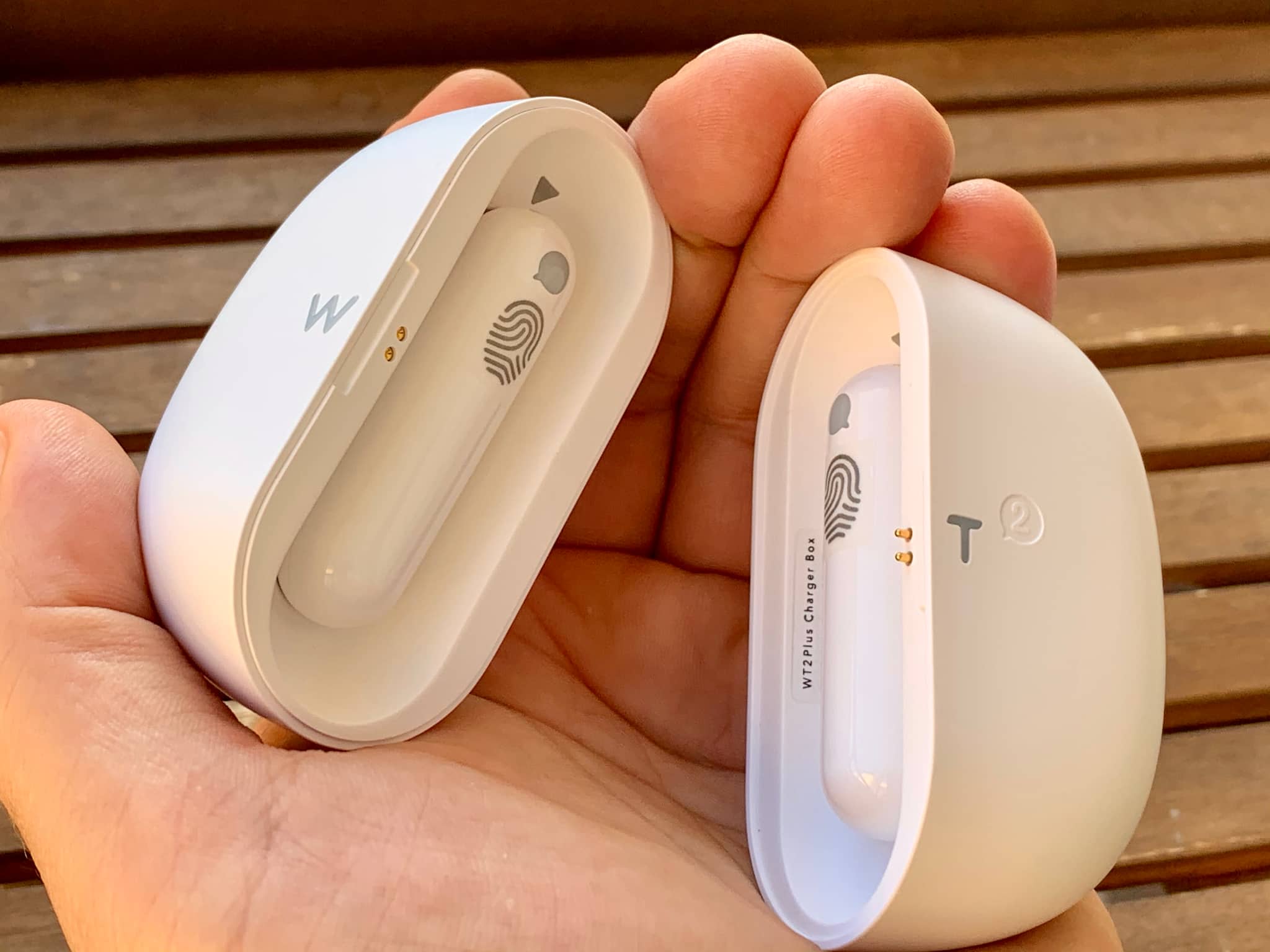 If your foreign language skills leave a lot to be desired, these specialized earbuds from a Chinese brand, called TimeKettle, provide near real-time translation from one language to another, with 95 percent translation accuracy and support for enough language pairs to cover more than 80 percent of the world’s population. Here’s how they work in real life.

The Babel Fish dream lives on

I’ve always been fascinated by so-called Babel Fish concept from “The Hitchhiker’s Guide to the Galaxy”, a series of comedy sci-fi novels by Douglas Adams. His fictional species of fish can instantaneously translate between any language. It’s one of those future predictions that I never thought would become a reality in my lifetime — yet here we are in 2020 with a tiny device that uses machine learning to accurately translate languages in near real time.

What’s in the box?

The hardware is pretty solid. The hard plastic earpieces arrive in a travel-friendly carrying and charging case which looks similar to Apple’s charging case for the AirPods Pro. The egg-shaped container splits in half and snaps together magnetically, which is great if you’d like to hand one side to your conversation partner while keeping the other half to yourself.

The rounded case is just the right size to easily slide in laptop bags and purses without bulging them. It’ll also fit comfortably in coat pockets though pant pockets may be a challenge. The included ear hook helps hold the earbuds in place so they don’t fall out of the user’s ear. In case you haven’t figured it out yet, these are not your standard earphones for listening to music and making phone calls — that’s why there’s no left or right earbud. Rather, you’re dealing with a host earbud that you’ll be using and a guest one through which translation will be played.

How does the magic work?

These crowdfunded earpieces pair with your iOS or Android smartphone via Bluetooth 4.2. They don’t work on computers. Instead of the usual pairing procedure via iOS’s Settings app, you connect and configure them via the company’s mobile app. To pair your WT2 Plus, take them out of the case and hold them near your iPhone, then fire up the app and follow the instructions to complete setup (you’ll need to approve iOS’s Bluetooth permission prompt). 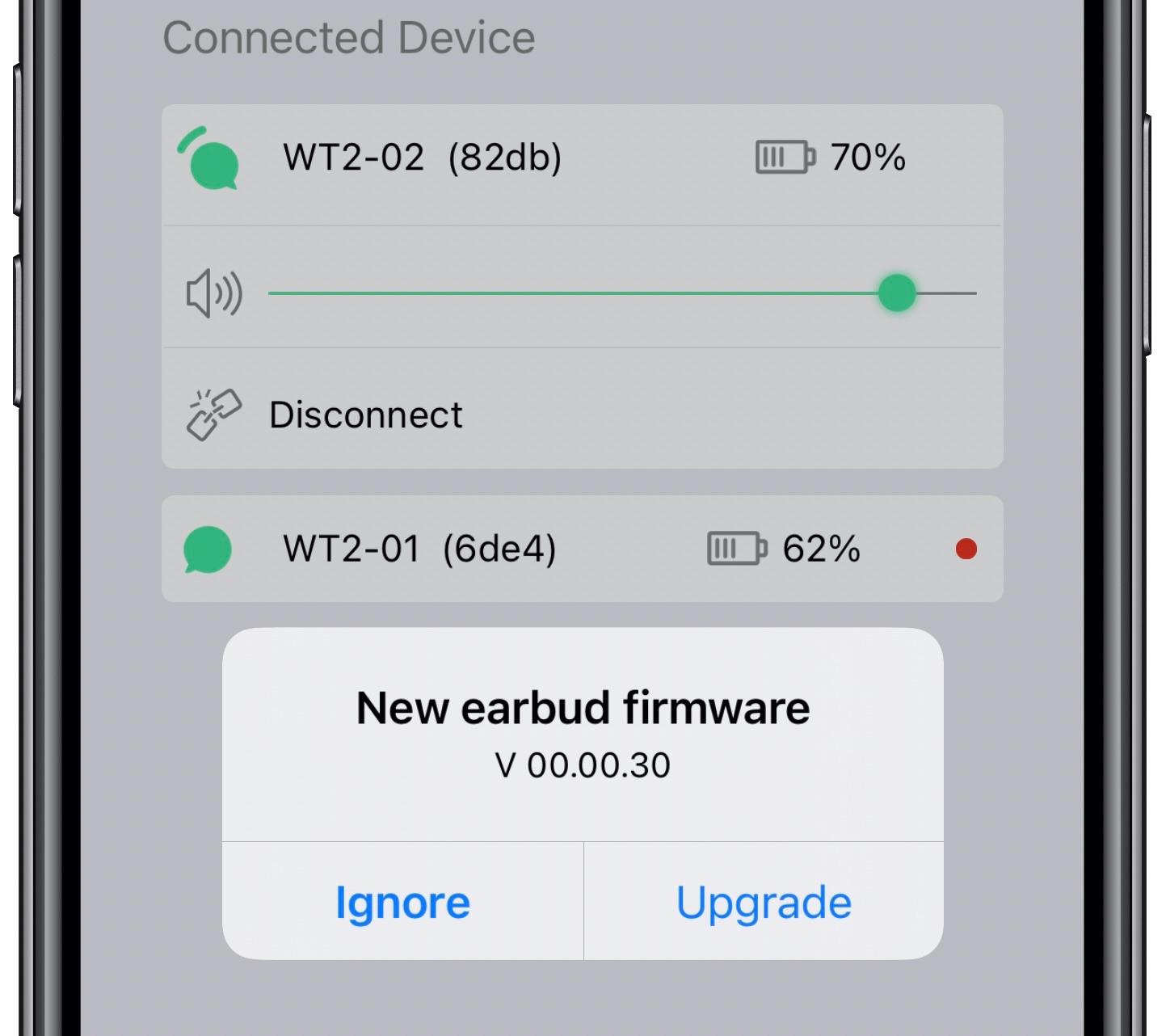 The integrated dual beam-forming microphones help isolate what you’re speaking, working their best to disregard background noise. You may experience certain issues with noise cancellation, which I’ll discuss a bit later. The company has partnered with Google, Microsoft and Tencent AI Lab to make possible quick translations across a range of scenarios.

The app is the true brains behind the magic of the WT2 Plus. It talks both to the earbuds and the cloud, providing translations of spoken words, phrases and sentences. You also use it to connect and set up the earbuds, switch language pairs, access useful tutorial videos, change settings, apply firmware updates and more. That said, the vendor recently prompted customers to switch to its “TimeKettle” app through which all of its devices are now being managed.

The old “WT2 Plus” is still available to download, but it won’t receive further updates.

There are three modes available in the app: Speaker, Touch and Simul.

Speaker Mode lets you use an earbud while playing the translation through the iPhone speakerphone rather than having it be routed to the other earbud. Your conversation partner simply speaks into your iPhone. As such, it’s particularly useful in situations when you want a group of people to hear translated speech without sharing the other earbud with anyone.

To avoid picking up ambient noise as much as possible, Touch Mode is like walkie-talkie: it only translates the part heard when you tap and hold the logo on the earbud side to speak. Because it requires physical action, this mode is best suited if you find the other modes lacking.

Simul Mode is the closest thing to the Babel Fish you’ll get. It’s great for engaging in a natural conversation through eye contact and body language provided you have no problems sharing an earbud with your conversation partner. Thanks to its hands-free nature, you simply say what you want, then pause for a second or two after finishing your sentence as the app prepares to speak the translation into the other person’s ear. You don’t have to stop talking when the other side is listening to the translation. This mode works best in quieter environments.

Like with all wearable translators, you can’t just pop these in your wear, start talking like you normally would and expect perfect results. But as long as you’re speaking slowly, clearly and in simpler sentences, expect to be impressed with translation accuracy. In Speaker and Touch modes, simpler sentences are typically translated with a delay of up to five seconds.

I’ve achieved the best results by speaking calmly, slower than I do in real life, choosing simpler sentences. Of course, background noise can affect translation accuracy greatly. The algorithm supports automatic voice sensing, but it sometimes couldn’t pick up my voice in very noisy environments when in Simul Mode. In those situations, you might experience reduced translation accuracy and significant delays. As always, some languages will work better than others — again, it all depends on how fluently and clearly both parties speak.

TimeKettle has rated them with five-hour battery life. In my testing, they lasted between three and five hours on a single charge, depending on the mode used. Touch and Speaker modes won’t drain the battery as fast as Simul Mode wits its always-listening capability (similar to Apple’s Hey Siri). My fully drained earpieces took about an hour and a half to fully recharge.

As for the provided carrying and charging case, its internal battery has enough capacity to charge your earbuds from dead to a hundred percent two and a half times before it itself will need to be recharged. You can recharge the case via the integrated micro-USB port (a cable is included) found at the bottom. It would be much nicer if the case had a USB-C port instead and used Qi wireless charging as well. Fast-charge is also unsupported because there’s no USB-C.

The “W” and ‘T” on the case’s front flash to indicate the current charge level of the earbuds inside, with each flash corresponding to a 25 percent charge. For instance, two flashes of the “W” means the host earbud has more than fifty but less than 75 percent charge left in it.

TimeKettle has been adding new features to the product by way of regular updates to its mobile app on the App Store. For instance, the earbuds launched with support for just 30 languages. Over time, however, they’ve picked up support for additional language pairs.

Today, the WT2 Plus is able to translate across 40 languages, including English, French, Spanish, German, Korean, Japanese, Cantonese, Mandarin, Hindi and many more. It also supports 80 accents for these languages, with as many as 14 different accents for English alone. And earlier this month, their app has gained the ability to download language pairs so that you are able to use the earbuds in offline mode, without a network connection. 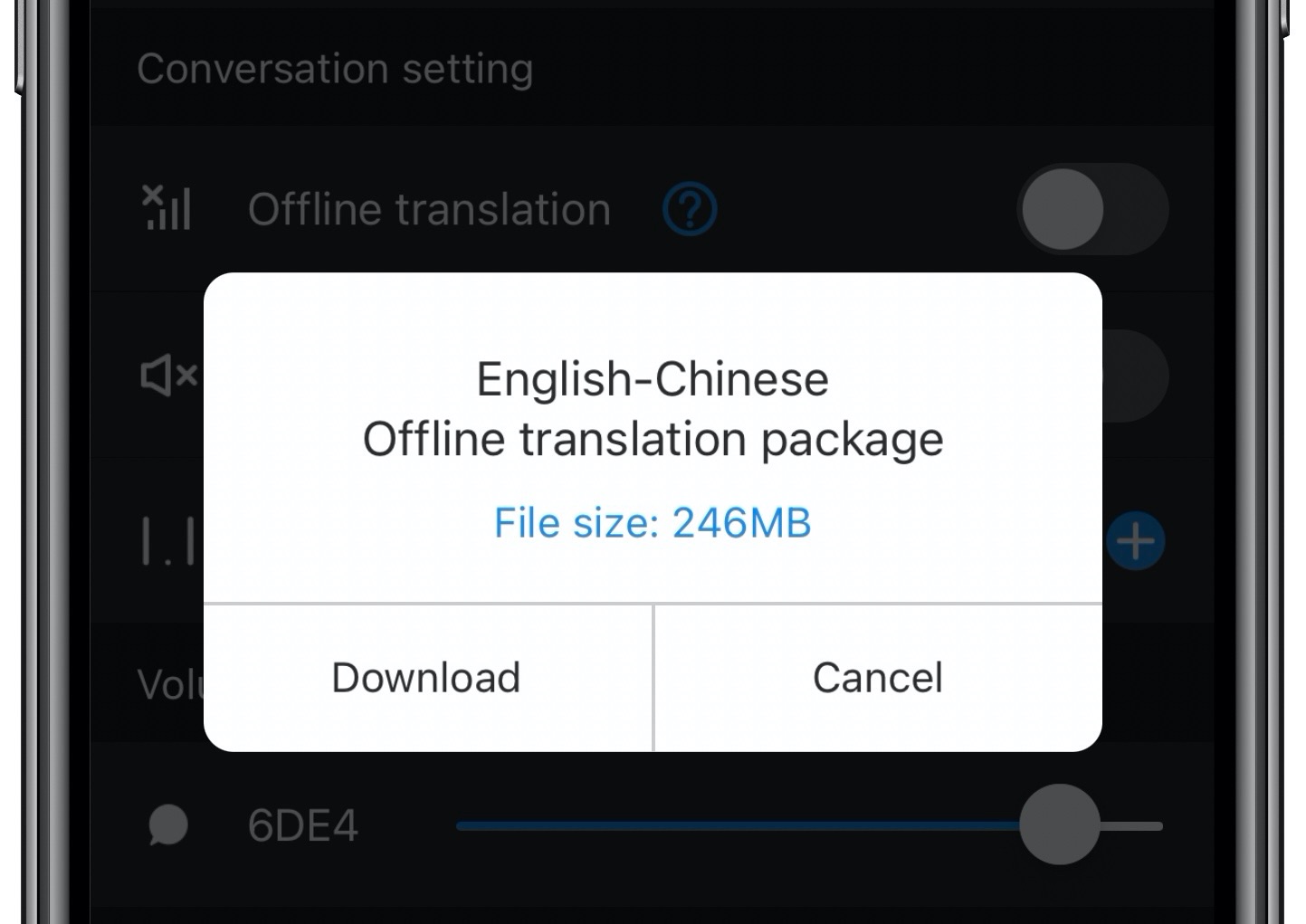 The handy offline translation feature is currently available between:

Additional offline translation will be available around the end of December 2020 between:

On top of that, they’re planning on introducing remote translation functionality around the end of this month to give users the ability to translate without geographical restriction. It will make possible cross-language conversation for people in different countries. 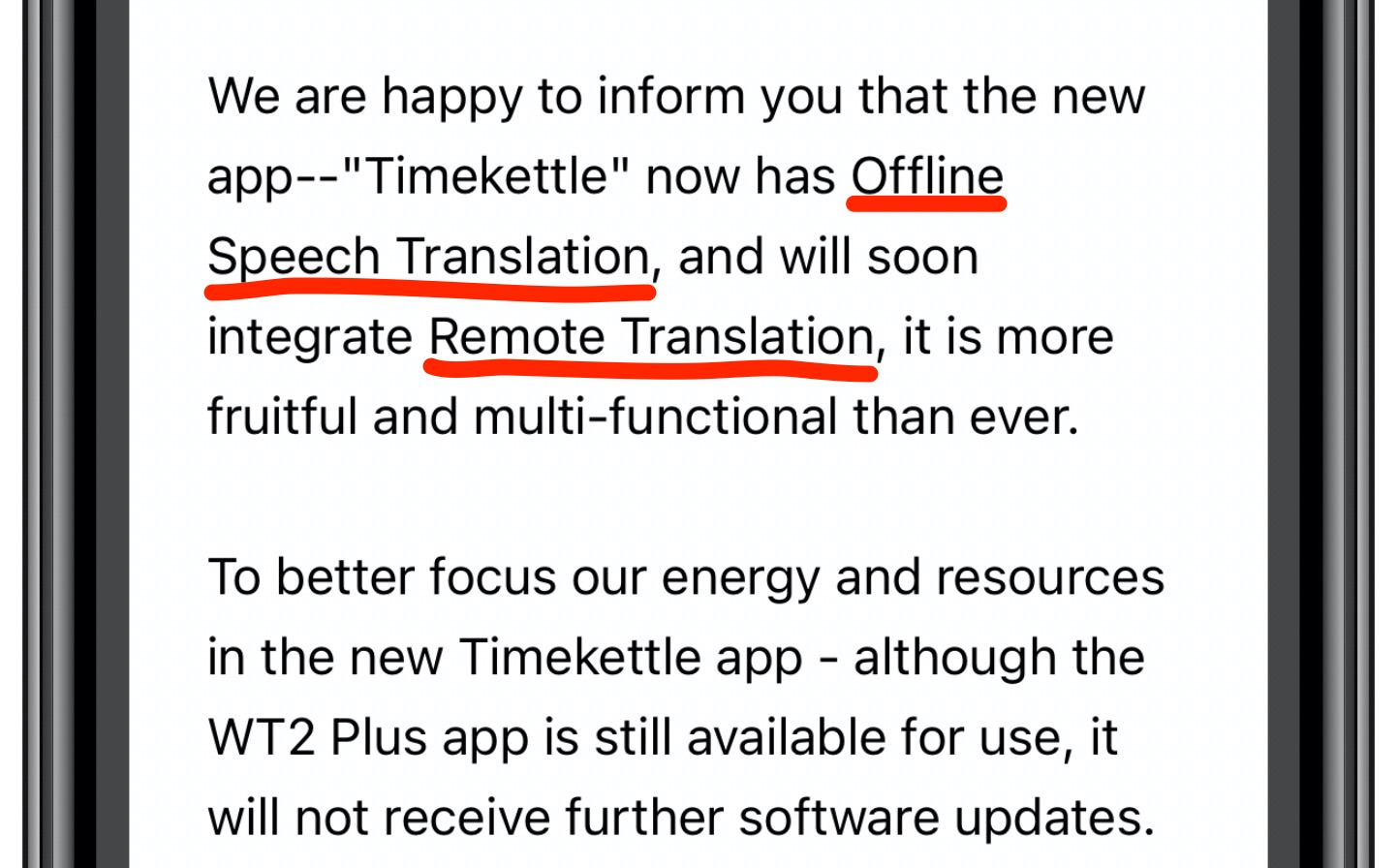 Do I hear any complaints?

Now, I can think of a few areas of improvement from the top of my head.

For starters, the algorithm needs more work so it can better distinguish between the user’s voice and background noise in noisy environments. The app is well designed but could use some additional work. I also wished Simul mode would not occasionally attempt to translate similar-sounding languages through the incorrect earbud. And last but not least, sometimes longer sentences take a couple of seconds to translate, ruining the experience.

Thankfully, most of these complaints can be addressed in software. As I mentioned earlier, one such improvement is the recently-added offline mode that improves translation speed. Other complaints will require a re-engineered earbuds though. As an example, the WT2 Plus adopts a one-size-fits-everyone approach so they may not fit well in some user’s ear (something to fix in the next iteration). And I want them to shift to USB-C charging instead of micro-USB.

Final verdict: the Babel Fish is a step closer to reality

For all intents and purposes, these are arguably the best translation earphones available on the market. As a wearable translator, this product works much better than Google’s Pixel Buds which I’ve had the opportunity of using for about a week. Most importantly, they work as advertised. The first time I used them, I talked to my friend who only speaks German. They worked reliably and we were able to understand each other perfectly. It felt like magic, really.

I would easily (and especially) recommend these specialized earphones to world travelers, business professionals, ordinary users who don’t speak foreign languages, those wishing to learn a new language or just about anyone who needs to converse with almost anyone with ease. I can see the product selling quite well to its intended target audiences. 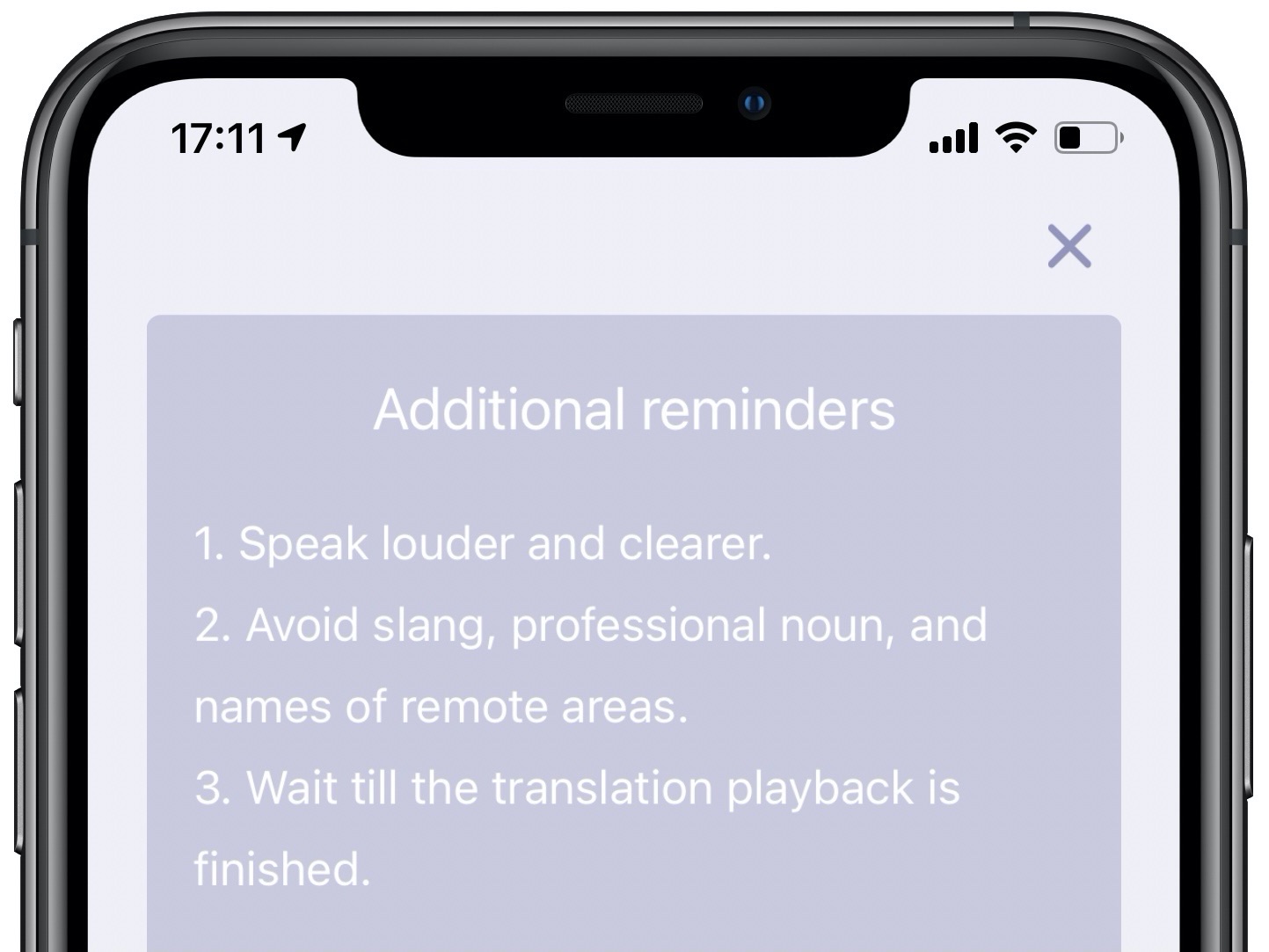 Keep in mind that the MT2 Plus is a specialized product — you’re reading the wrong article if you’re in a market for all-around earbuds to listen to music, conduct phone calls and more. I don’t have any issues with the $230 price tag due to good build quality, reliable operation and the fact that hiring a professional translator is way more expensive than buying a pair of these.

For those who don’t converse often with non-native speakers or have limited needs in terms of translating one language to another, free apps like Google Translate or Apple’s new Translate app are more than adequate. We’re still some time away from a Babel Fish-like device or the Universal Translator from Star Trek, but the WT2 Plus takes us one step closer to that reality.

Here’s what we liked and disliked about the WT2 Pro.

The WT2 Plus can be picked up directly from the TimeKettle website for $240 although retailers such as Amazon may offer them for as low as $199.