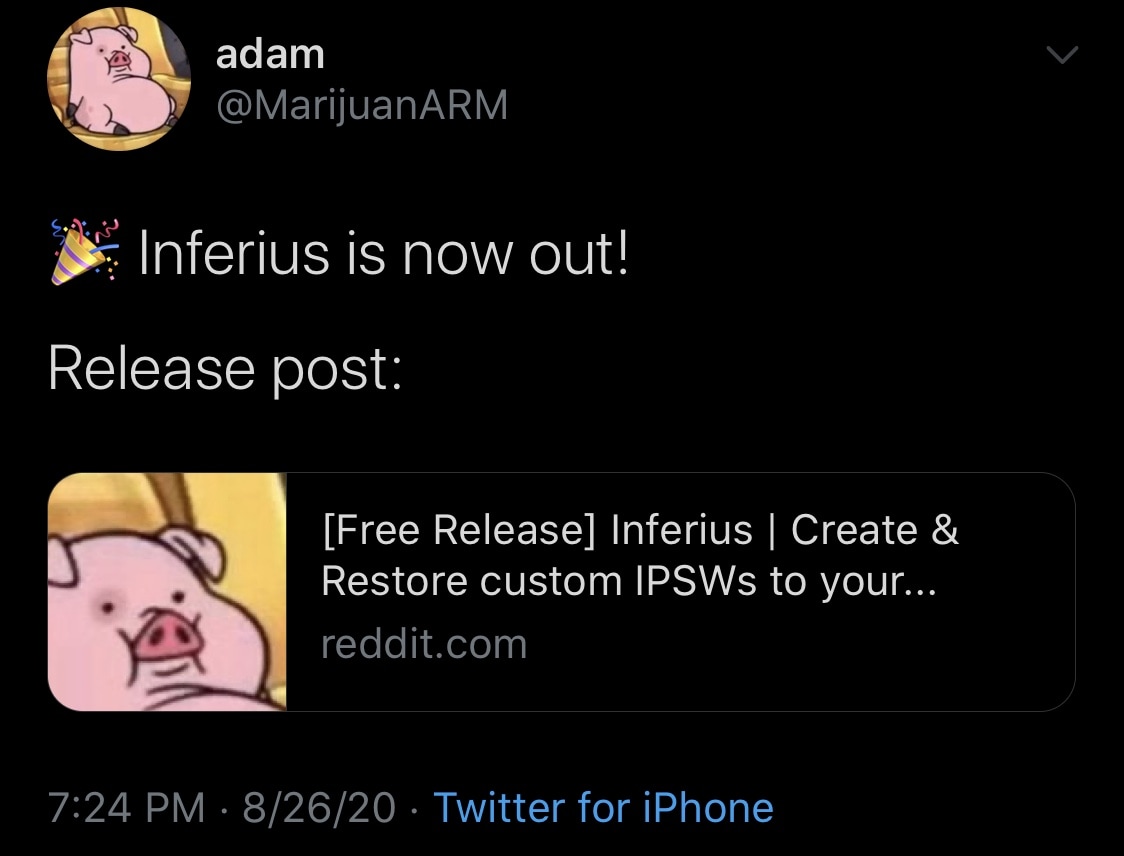 Upon refreshing the /r/jailbreak subreddit Wednesday evening, many jailbreakers were pleasantly surprised to learn about the release of a novel jailbreak-centric utility dubbed Inferius by @marijuanARM.

After a quick scan of the release notes on the project’s official GitHub page, it becomes apparent that Inferius was created to aid users in the process of creating and restoring from custom IPSW files. Quite the attention-grabbing feat indeed, but you’ll definitely want to read more about Inferius before you start jumping right in.

There are potentially exponential benefits associated with the ability to restore from a custom IPSW, but perhaps the most obvious is that a user could use this ability to downgrade an iPhone or iPad to a previously released version of iOS or iPadOS that is no longer being signed by Apple. As you might come to expect, however, there are a few caveats involved worth mentioning…

First and foremost, Inferius only works with 64-bit iPhones and iPads that are susceptible to the checkm8 bootrom exploit – a hardware-based exploit that Apple can’t patch with a mere software update. This means it supports all the same handsets that are currently supported by the checkra1n jailbreak, including those as old as the iPhone 5s and those as new as the iPhone X.

Furthermore, devices with custom IPSWs loaded onto them via Inferius will need to be booted with a computer each time they are turned off and back on again with PyBoot or ra1nsn0w. This has to do with the fact that the tool uses a semi-tethered exploit to work, just like the checkra1n jailbreak. This in and of itself could be a turn off for some users, but perhaps not those who are already used to harnessing a computer to reboot their checkra1n device(s).

At this time of this writing, Inferius only supports macOS and it isn’t entirely clear at this point if it will gain support other operating systems in the future. Another thing worth noting is that the tool isn’t for novices – instead, it seems more attuned for developers or experienced software tinkerers. The potential complications and risks associated with performing this type of mod shouldn’t be underwritten – here’s a warning from the developer:

I take NO responsibility for any loss of data, issues with your device, or anything else if you use Inferius. You accept those risks when you use this tool.

Unless you’re familiar with command line tools and the mechanisms that make firmware restoring and signing tick, we wouldn’t recommend jumping into the deep section until you first do some reading to better understand Inferius and how it works. A full FAQ, list of necessary tools to get started, and links with support from the developer are published on the project’s GitHub page just in case you find yourself curious about the project. The developer also goes into detail about creating custom firmware bundles, which is a requirement for using Inferius.

Do you plan to try Inferius, or are you too concerned about the usability and potential risks? Share in the comments section below.