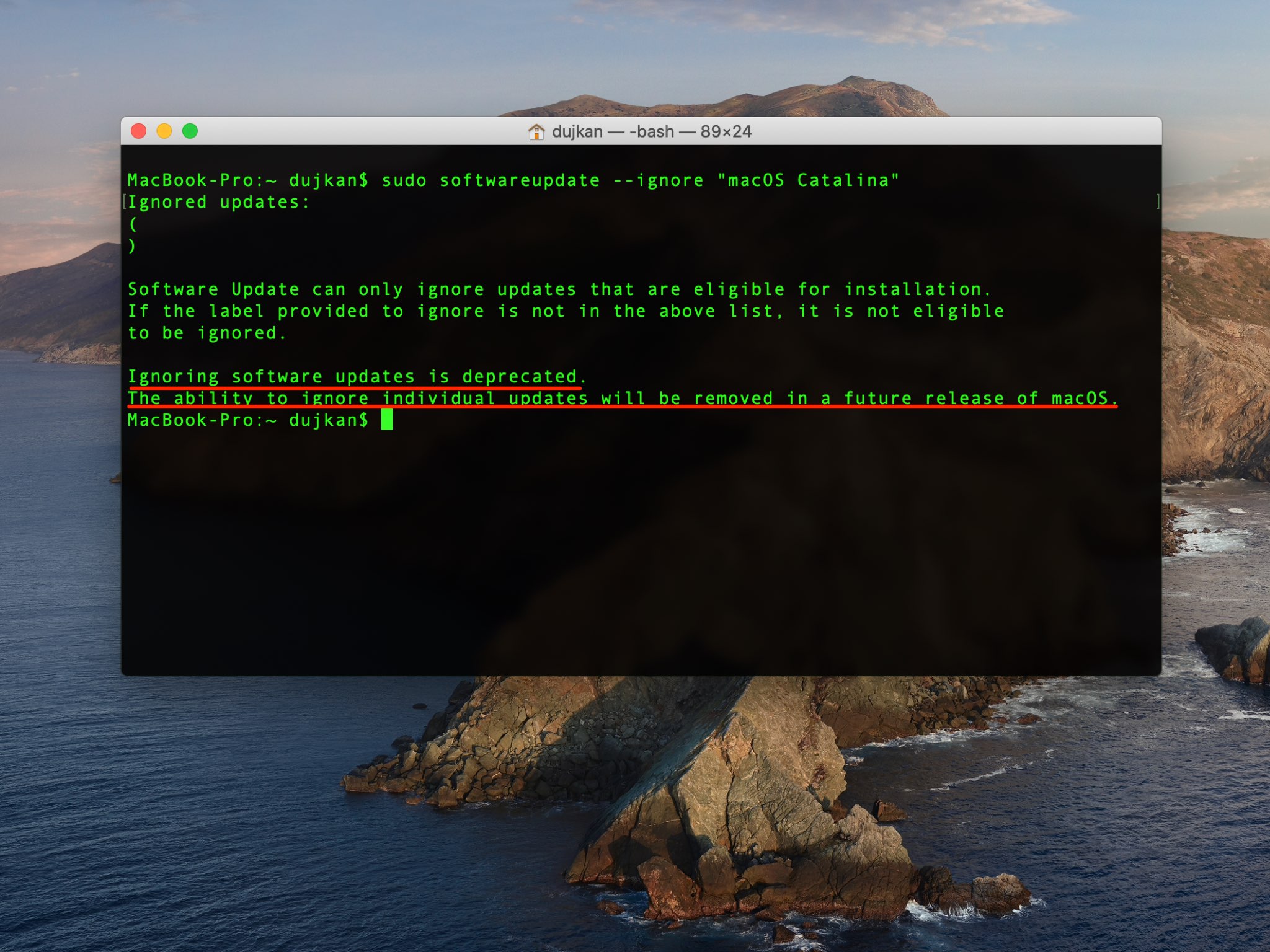 After installing yesterday’s security updates for older macOS versions, people can no longer get rid of that pesky macOS Catalina upgrade reminder with a Terminal command. If you’ve already installed the macOS Catalina 10.15.5, avoiding those nagging macOS update notifications no longer works because ignoring major macOS software releases has been officially deprecated.

Bringing back the nagging

This affects not only people who have upgrade their Mac computers to the latest macOS Catalina 10.15.5 update that dropped earlier this week, but also folks on macOS Mojave or High Sierra who have installed Apple’s security updates.

TUTORIAL: How to disable automatic software updates on your Mac

As a result of the change, people on earlier macOS versions will be stuck with that annoying badge on the System Preferences icon in the Dock.

Per Apple’s macOS Catalina 10.15.5 release notes, major new releases of macOS can no longer be hidden when using the softwareupdate Terminal command with the --ignore flag.

The Terminal trick is no longer working

MacRumors says the above Terminal command displays the following message after you have updated your Mac to macOS Catalina 10.15.5 or applied Apple’s Security Update 2020-003:

Ignoring software updates is deprecated. The ability to ignore individual updates will be removed in a future release of macOS.

To reiterate, this change affects people on macOS Catalina 10.15.5 as well as those running macOS Mojave and macOS High Sierra after installing Security Update 2020-003.

How to temporarily remove update badge

One way to avoid these nagging prompts involves modifying the property list com.apple.dock.plist used by the Dock, changing the dock-extra from true to false, but I wouldn’t that if I were you as it may require a complete re-setup of everything in the Dock.

TUTORIAL: Adjusting how often your Mac checks for software updates

A MacRumors Forums reader has proposed the following solution, which appears to work although it’s worth keeping in mind that it’s temporary:

1) Quit System Preferences on your Mac.

2) Launch the Terminal app from your Applications folder.

3) Paste this command in the Terminal window, then press Enter to execute it:

4) Next, paste this in Terminal and press the Enter key to run the command:

For me, the badge disappeared immediately after step 5. Several people found that the Terminal command ‘sudo softwareupdate –ignore “macOS Catalina” ‘ produced a message saying that ignoring software updates is deprecated. But issue the rest of the commands above and the red badge will disappear until you run Software Update again.

Another poster said the badge could be removed until the next check with this command:

Again, those are only temporary solutions for getting rid of that annoying badge.

No matter how you look at it, it’s pretty clear that Apple wants as many users as possible to upgrade their Mac computers with all of the most recent operating system updates.

What do you make of this change, girls and boys?

Be sure to chime in with your thoughts and observations concerting this “inevitable” move on Apple’s part in the commenting section down below!