Both the Apple Watch and iPhone support silent mode – a feature that mutes all incoming notification sounds to prevent awkward situations in certain predicaments, such as a ringtone going off in the middle of class or disturbing participants during a work conference. Unfortunately, this handy feature doesn’t stay in sync between both devices, necessitating manual input for each.

This is a problem that a newly released jailbreak tweak called WatchMuteMirror by iOS developer Cardboard Face aims to resolve. As you may have inferred already from the tweak’s name, WatchMuteMirror keeps silent mode in sync between your iPhone and your Apple Watch so that the latter doesn’t make a bunch of noise even after you toggle the mute switch on the side of your iPhone.

Indeed, this is a simple case of ‘why didn’t Apple think of that?’ And it’s a particularly important one too. After all, if I was going to toggle silent my iPhone for a specific purpose, then why would I want my Apple Watch to announce incoming notifications loud and clear? I’d much rather cope with the subtle tap on my wrist or check back on my notifications later after I’ve disabled silent mode.

After you install WatchMuteMirror, you’ll find a dedicated preference pane in the Settings app where you can configure a few options to your liking: 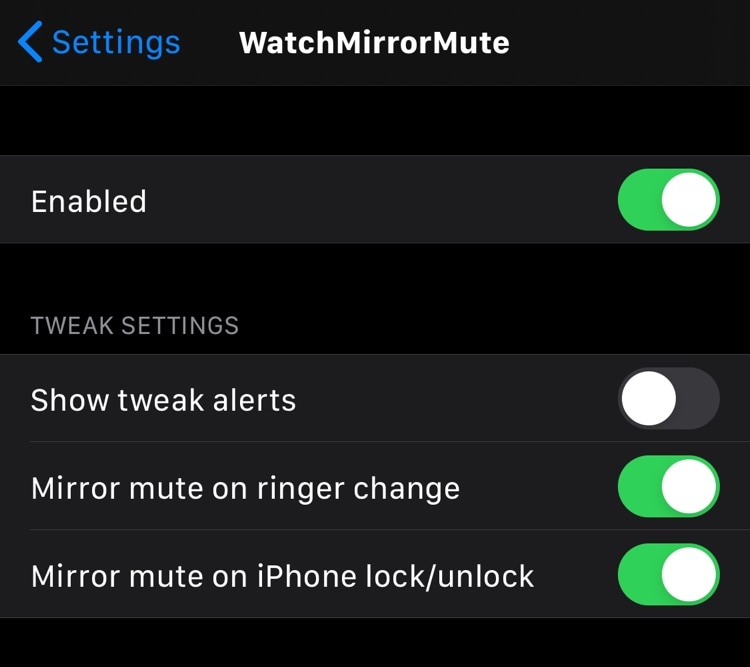 Because the Apple Watch uses short-range Bluetooth to communicate with your iPhone, it can be easy to walk away from your handset and lose connection. In this case, the tweak would be unable to send a silent mode signal to your iPhone, and that’s why the latter two options exist.

The ability to mirror silent mode when toggling the silent switch or when locking/unlocking the handset ensures that the latest silent mode state is synced to your Apple Watch while it’s in range at all times. This way, the mirroring should always be dead-on.

Jailbreakers who would like to improve the Apple Watch user experience can purchase WatchMuteMirror from the Packix repository for just $0.99 via their preferred package manager. The tweak supports jailbroken iOS 13 devices, and obviously requires an Apple Watch to be used.

Will you be using WatchMuteMirror going forward? Let us know in the comments section below.