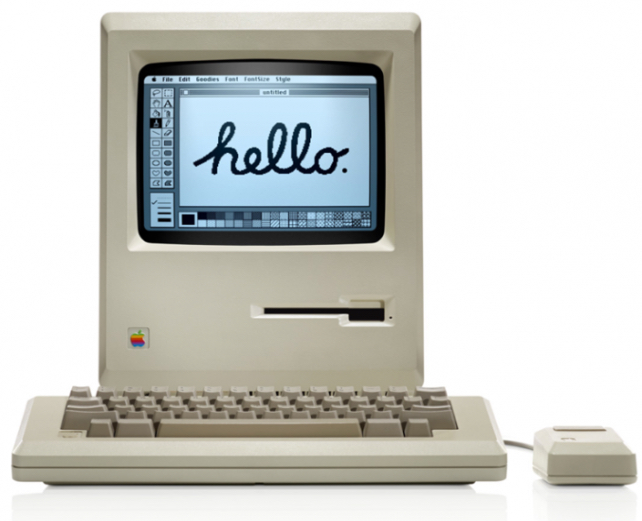 Thirty-six years ago today, Steve Jobs unveiled the Mac. Looking back on it, the original Macintosh seems at once to be both anachronistic and totally modern. One this is certain: With the release of Macintosh, Apple forever changed the world of personal computing.

Apple, incorporated in 1976, had been on the leading edge of the first wave of personal computers with the Apple II, a hugely successful computer that had secured a place for itself in countless schools, homes, and businesses as Apple and other companies like Tandy, Sinclair, and Commodore pioneered the burgeoning personal computer market.

A land of beige boxes

By 1981 personal computers were big business, and that’s when IBM muscled into the space with its PC. Within a couple of years Compaq and other companies were offering PC-compatible computers, and the market exploded. By then the Macintosh project was already underway, parallel to Apple’s efforts to create a business machine called Lisa.

While Lisa would prove to be an expensive failure for Apple, the developers behind Macintosh learned from Lisa’s mistakes. Jef Raskin, an early Apple employee who was initially responsible for writing and publishing technical documentation, developed the Mac in secret with Bill Atkinson, Andy Hertzfeld, Burrell Smith and others. By January of 1984, the computer was ready to be revealed to the public. Here’s what that reveal looked like.

The personal computer industry was going in one direction: nondescript rectangular boxes running command-line interfaces. This required users to memorize complex commands to get software applications to work. The Apple II, for all its merits, worked exactly like that.

The Mac was the first successful personal computer to use a graphical user interface and a mouse, instead. Using a desktop, file, and folder metaphor, Apple was able to create a user experience that borrowed enough from the real world that people understood intuitively how to use it. While the concept of skeuomorphism – an interface that looks and acts like a real-world object – has fallen out of favor in recent years, it was groundbreaking for 1984.

Everything about the design of that first Mac was different from PCs of the age, even the look – more kitchen appliance than computing device. Or, as Apple would put it in countless promotional materials, “The Computer for the Rest of Us.”

The Mac’s history is well-worn mythology at this point and is really rather orthogonal to what got me thinking about this today. As antiquated at that original Macintosh may be to users of modern smartphones and computers, it’s still amazingly forward-thinking.

If you sat down the average computer of today in front of a circa-1984 PC running MS-DOS, they’d likely be very confused. Most wouldn’t have the slightest idea how to make it work.

That right there shows you just how future-forward the Macintosh was for 1984.

More bang for your buck

We get a lot more bang for the buck than we did.

Obviously, in 2020, $2,495 gets you a lot more computer than it did then. For that, you can pick up a 16-inch MacBook Pro or a very well-equipped 27-inch iMac, with many orders of magnitude more RAM, storage, processing power and functionality than you could have dreamed of 36 years ago. And $2,495 would net you a fully-loaded iPhone 11 Pro Max with more than enough left over for a Mac mini.

Our expectation as consumers is much higher than it was in 1984, as well. More than three decades ago the vast majority of us didn’t use computers because we didn’t have to use them – they were expensive, limited in capability and scope. These days smartphone and computer literacy is expected from almost anyone, even the youngest of us.

I started with the Mac when my family got a great deal on a 512K “Fat” Mac. I’ve been using them on and off ever since.

The Mac, along with relatively inexpensive LocalTalk network connectors and an Apple LaserWriter printer, gave rise to the entire desktop publishing industry. And the expectation that anyone, from a low-level clerk to an executive, was capable of producing business documents that looked professionally laid-out and composed. Later Macs would similarly revolutionize the video editing business.

The Mac has been challenged by the PC for as long as there have been both, and the business is very different now than it used to be. The battle for supremacy is long over, and market share changes a little from year to year, but 36 years later, Apple and the Mac are still forging ahead.

The innovations spearheaded on the Mac have gone far and wide – graphical user interfaces are de rigueur regardless of whether it’s Mac, Windows, Linux, or something else. Steve Jobs’ NeXT computer operating system, NeXTStep, would serve as the foundation for OS X. And OS X’s kernel was used to develop the iPhone.

So there’s a direct connection between what happened on that stage in 1984 and what’s in your pocket right now.

36 months is a long time in the computer business. 36 years is something else entirely. But just look at everything that’s happened since then, which the Mac has been a part of. It’s hard to imagine a world where the Mac hasn’t profoundly affected our expectations of how computers and other “smart” devices should work.

Are you a long-time Mac user? What’s your favorite “Classic” Mac model? Do you miss some aspects of the classic Mac interface? Or are you newer to all this? Tell me what you think in the comments.