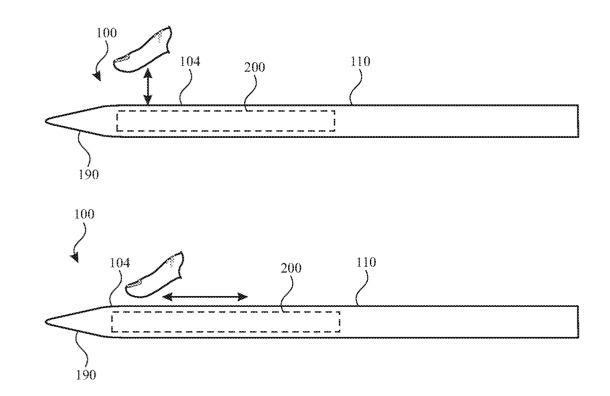 Apple gets a lot of patents approved on a regular basis. More often than not it’s the company covering its bases for future technology and ideas, rather than an indication of a pending feature upgrade for an existing product. But when it comes to the Apple Pencil, one can hope.

AppleInsider has the report on Thursday, detailing a new patent Apple was rewarded by the United States Patent and Trademark Office (USPTO). “Touch-based input for stylus” is U.S. Patent No. 20200012358, and it details how Apple’s stylus could support touch-sensitive control options in a future version. This would go beyond the double-tap function that the Apple Pencil 2 supports right now.

Furthermore, the stylus can effectively distinguish between tactile inputs from a user and disregard sustained tactile inputs that are provided while the user simply holds the stylus at the user’s natural grip location.

Interestingly, Apple’s idea here branches off from the possibility that most Apple Pencil users (or any stylus users for that matter) aren’t typically able to touch the display of the device they are using while they’re using the stylus. Not with the same hand, anyway, and not comfortably. So adding a touch-sensitive control option on the stylus itself could be a welcomed change:

Apple wants to make it possible for this “low profile” sensor to be in the user’s “natural grip location”, and the technology would be able to differentiate between an actual gesture and the user simply holding the Apple Pencil and moving it around.

Will we see this new idea come to life? It certainly seems possible. And it would definitely help the already popular Apple Pencil continue to stand out in a crowded market. Of course, between the original Apple Pencil and the Apple Pencil 2 Apple hiked up the price just a bit, so it would be interesting to see if a touch-sensitive Apple Pencil would also see a price hike in the future.

How much would you be willing to pay for a future Apple Pencil with a broader support for gestures?