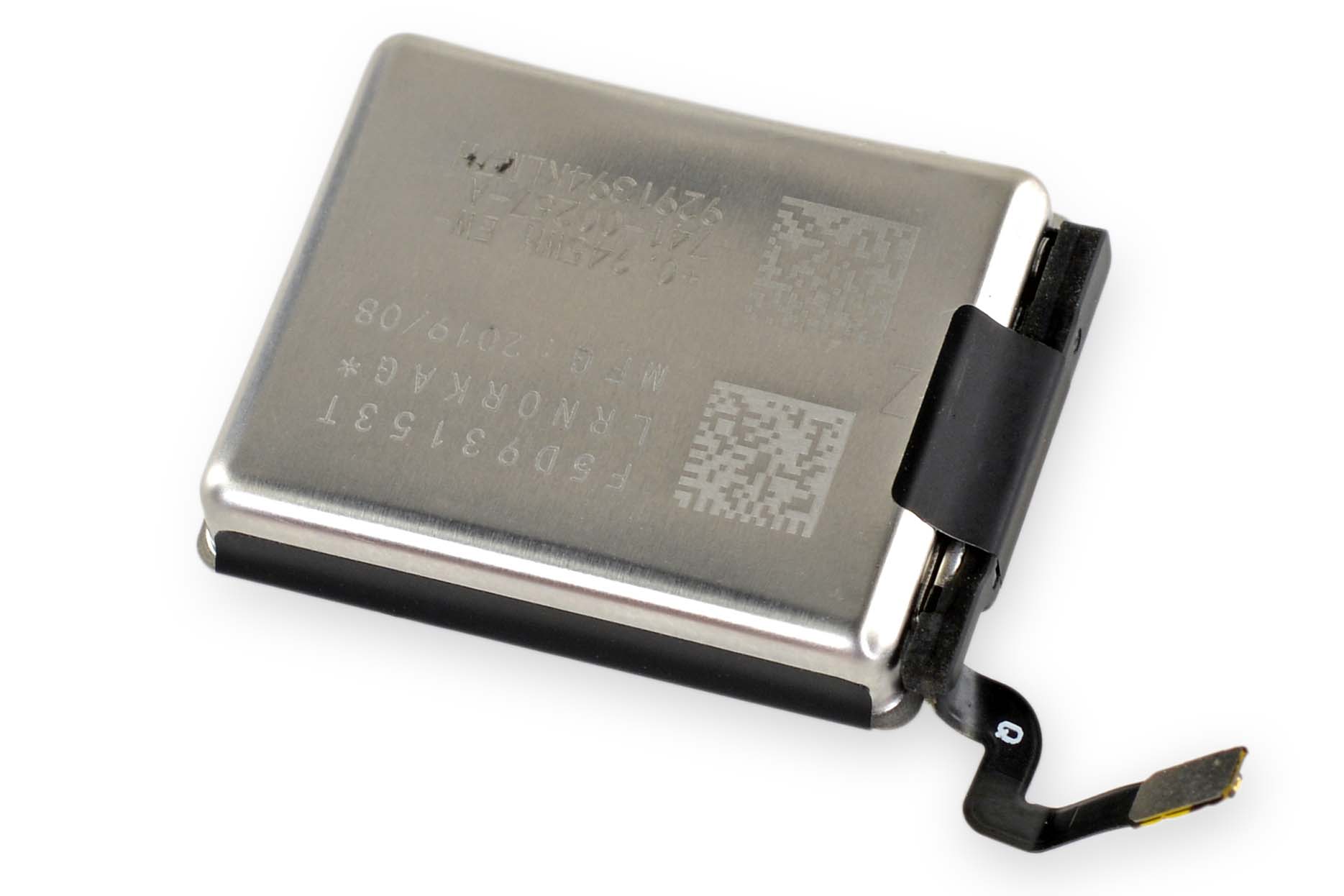 Earlier this week, iFixit tore down the Apple Watch Series 5‘s 44mm variant. The results showed a design very similar to the equivalent Series 4 from last year, with only minor changes. Turns out that the 40mm Series 5 is where the real action is.

iFixit decided to take apart the 40mm Apple Watch Series 5 today, and while initial expectations may have been to see more of the same as was discovered in the Series 5, that was not the case. The results of the successful teardown show a “radical new battery design”, as iFixit describes it.

Instead of the usual dark-colored outer foil pouch surrounding the battery (which most lithium-ion batteries sport), we noticed a snazzy new metal casing, most likely aluminum. This is the first time we’ve seen this in an Apple product, and it might tell us something about the future of battery replacements.

It turns out that the new metal encasement for the battery can actually save space inside the Apple Watch’s casing. iFixit believes that a patent could help describe what’s going on. But all-in-all, it looks like Apple managed to include 10% more battery capacity in this year’s 40mm model, despite the battery compartment itself not changing size all that much.

First, this new metal casing seems to be a more space-efficient method for sealing up batteries. In the Apple Watch Series 5, the overall size of the battery compartment doesn’t look like it changed much, if at all. But Apple managed to cram in 10% more battery capacity, and this patent seems to explain how. The traditional foil pouches leave a larger seal than this new metal enclosure, meaning Apple can theoretically put previously-wasted space to good use.

Additionally, the metal casing makes the battery physically stronger. This is fantastic for repair purposes, since it’s all too easy to puncture a lithium-ion battery during repairs. The outer metal shell should allow device owners to pry out the battery without risking damage to the internals, reducing the associated fire hazard.

The new metal casing likely makes the battery even stronger than before, too, and should help protect the battery during repairs (or teardowns!).

That’s not all, though. The patent hinted at before, which may or may not actually relate to this specific situation, suggests that Apple wants to switch to using screws to secure the battery in place, rather than relying on the glue it has in the past. As noted in the teardown, this would make the battery even easier to replace:

Lastly—and perhaps most importantly—the patent suggests that Apple wants to use this metal casing design to secure the battery to the device with screws, which would allow them to (hopefully) skip the repair-unfriendly glue. What’s more, they’d be able to accomplish this with no extra external brackets that would otherwise take up even more space.

You can check out the full teardown at iFixit, and it’s certainly worth a look.