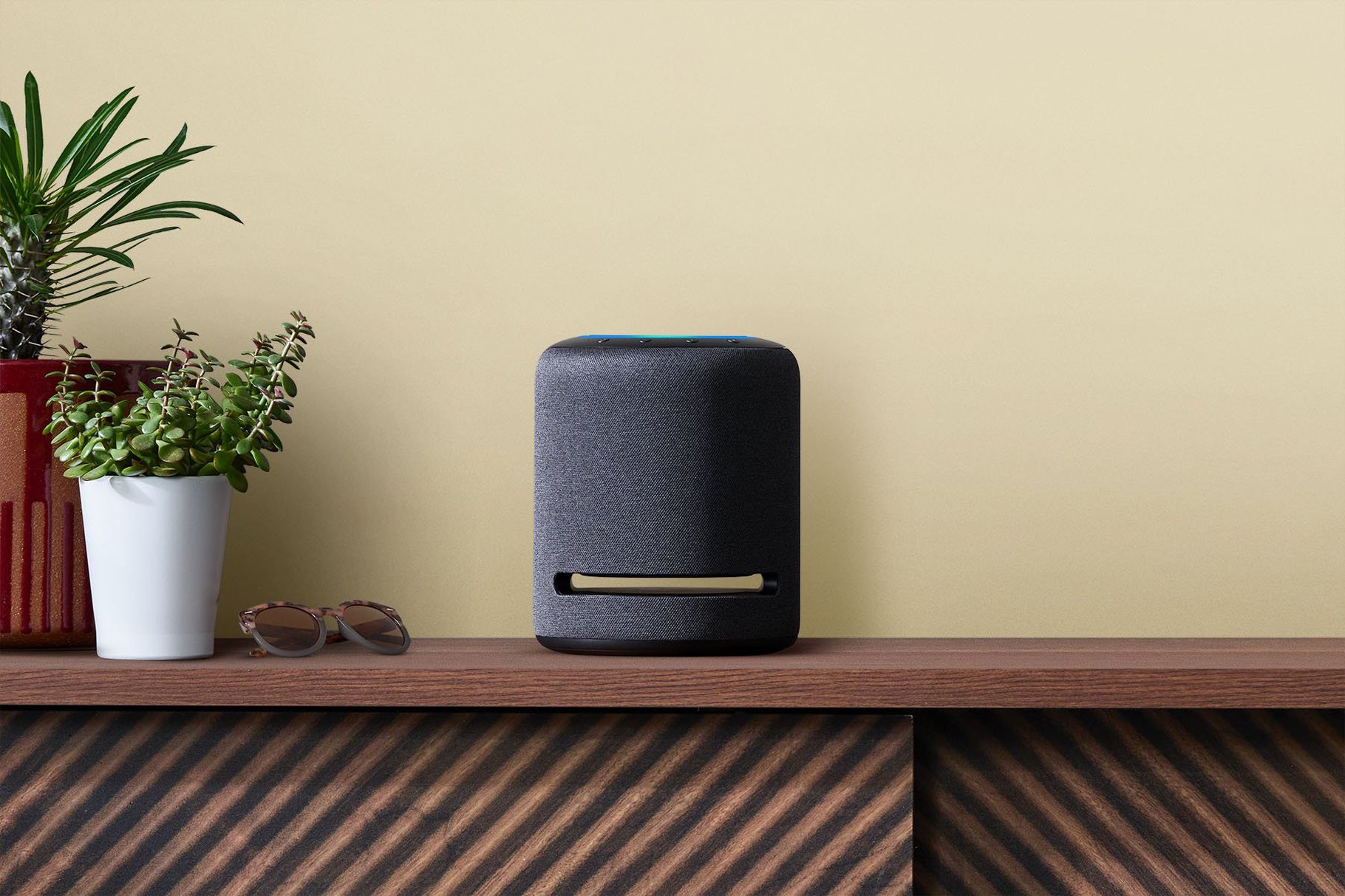 Amazon is hosting an event today that will see a variety of new hardware products announced, most of which will focus on the Echo lineup of smart speakers.

Last year’s Amazon event saw a ridiculous amount of devices and other things get announced, and there’s been some speculation about whether or not today’s event would see dozens of new items added to Amazon’s extensive library of self-branded products.

So far there are already quite a few new Echo products unveiled, including a new Echo Dot, a better-sounding Echo Studio, and more.

This is a developing story, so additional details will be added as they are revealed.

We’ll start with the high-end model, pictured at the top of this article (via The Verge), which Amazon bills as its first high-end speaker. It’s designed with audio quality in mind, built to support Amazon’s new Music HD streaming service, which supports lossless music.

The Echo Studio supports Dolby Atmos for even better sound quality, as well as 3D audio. The new smart speaker is equipped with five drivers for powerful sound quality, along with three mid-range speakers, a woofer, and a tweeter.

It sounds like a pretty strong contender to Apple’s HomePod. 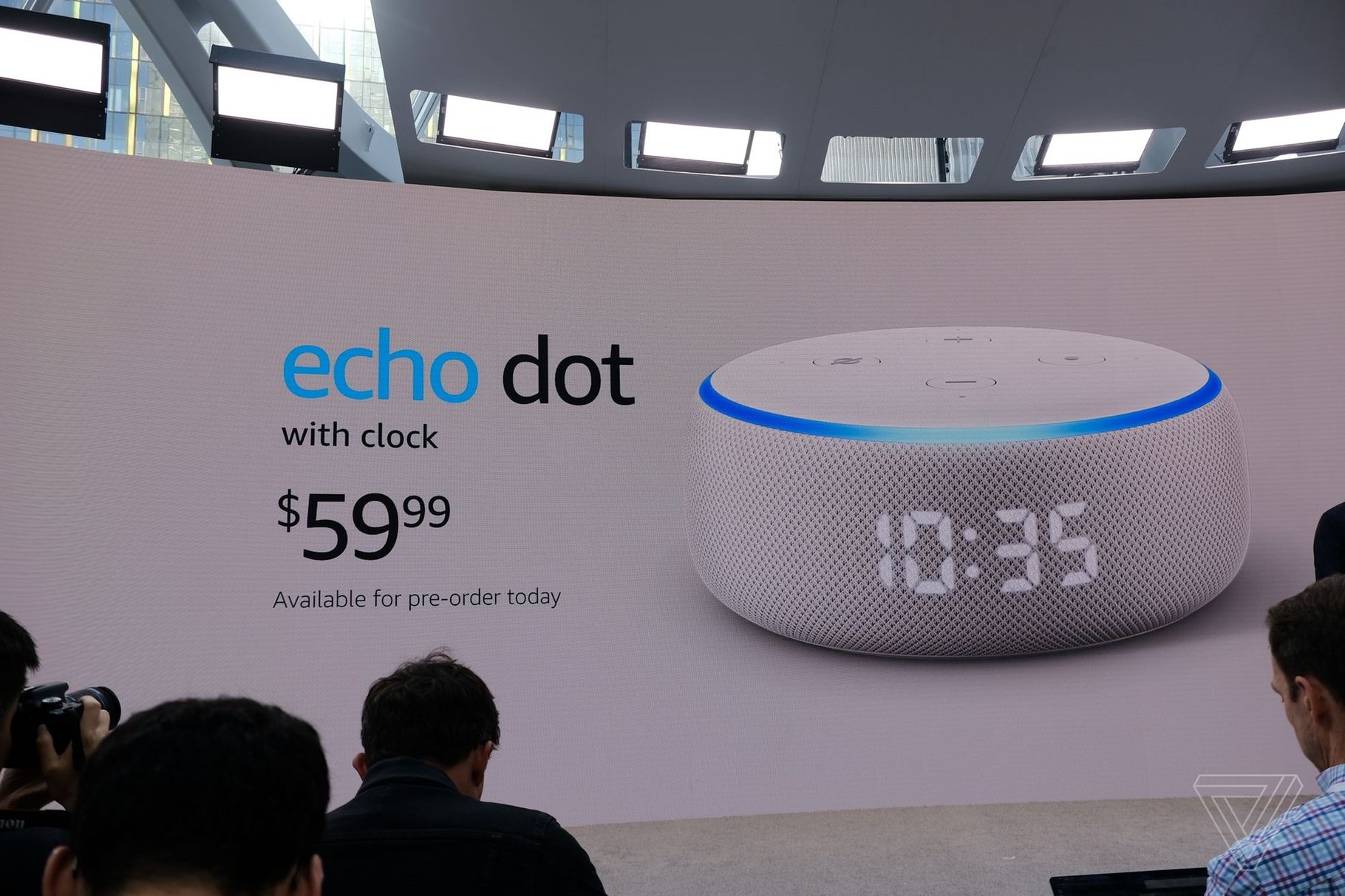 Amazon says that one of the most frequently asked questions for its digital personal assistant, Alexa, via the Echo smart speakers, is, “What time is it?” Amazon is here to help with a brand new Echo Dot that features a baked-in digital clock on the side of the new Echo Dot.

The Verge is reporting on the scene that this new Echo Dot will be sold alongside the older Echo Dot model — the one without a clock. The LED clock on the front of the Echo Dot will also show timers, the outside temperature, and alarms. If you set an alarm and need to snooze it for nine minutes, you can simply tap the top of the Echo Dot with clock to get a few extra minutes of rest.

There is no built-in camera in this Echo Dot with clock.

Pre-orders for the Echo Dot with clock begin today, and it’s available for $59.99. No word on when it starts shipping, though. 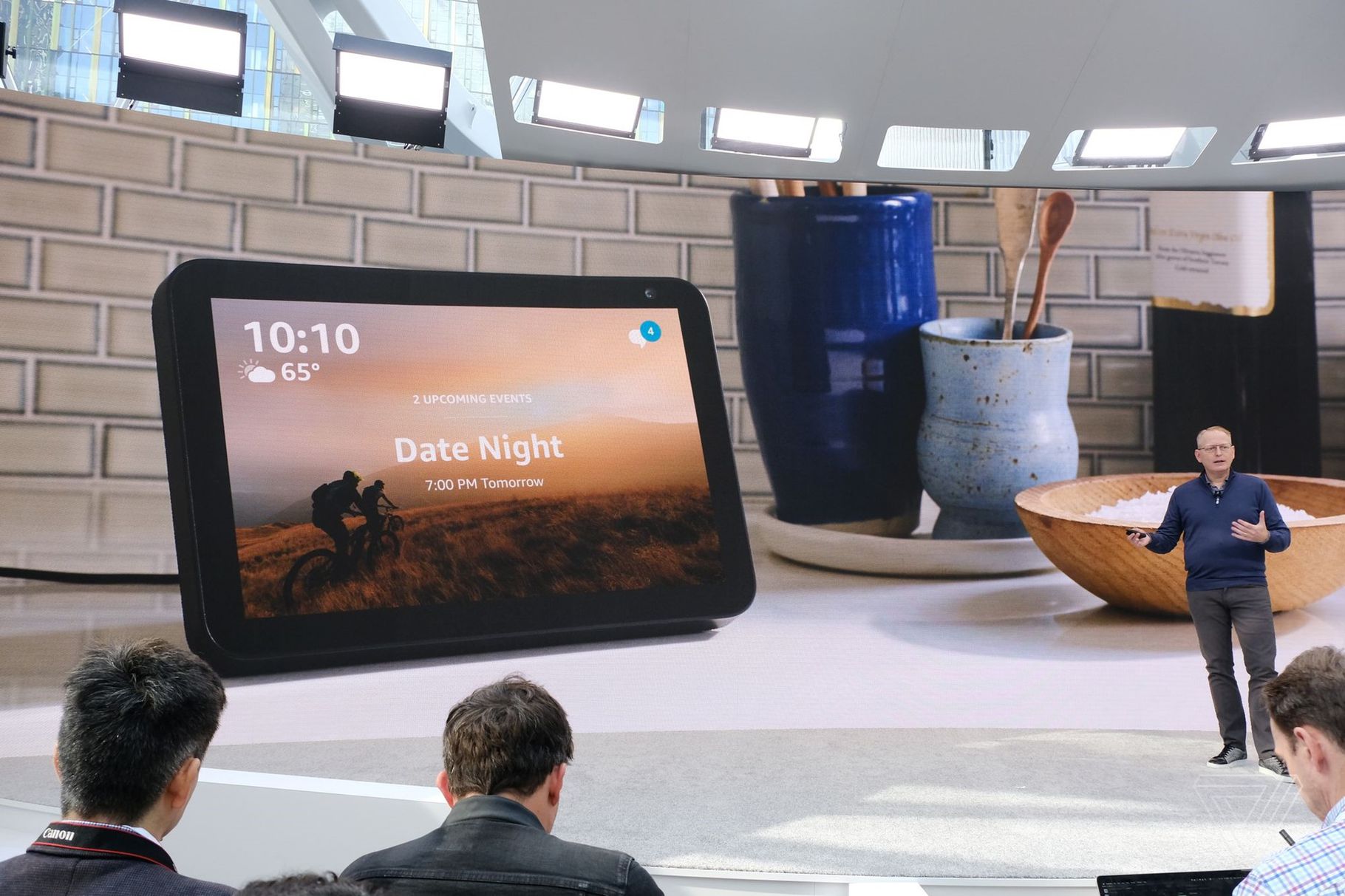 If a high-end audio-focused Echo isn’t your thing, and you don’t want an Echo Dot with a clock built into it (or even if you do want all of these things), how about a new Echo Show?

Amazon has also unveiled a new Echo Show –the Echo Show 8 (via The Verge) — the company’s newest smart display. This new model will fit between the Echo Show that has a 10.1-inch display, and the Echo Show 5, with its 5-inch screen. This has an “HD” display, and will feature a privacy shutter as well.

The new Echo Show 8 has “similar speaker performance” to what’s already in the standard Echo Show.

What’s more, the new Echo Show 8 also welcomes a new “drop in for all”. This expands on Amazon’s “drop in” feature, bringing new group video chats to the mix. With this new feature it will automatically launch a video/audio chat with everyone in your family that owns an Echo smart speaker/smart display.

Amazon’s FreeTime feature, which provides access to an array of video games for kids, is also coming to the Echo Show lineup as well.

The Echo Show 8 goes up for pre-order today, it costs $129.99, and it will ship in time for the holidays this year. 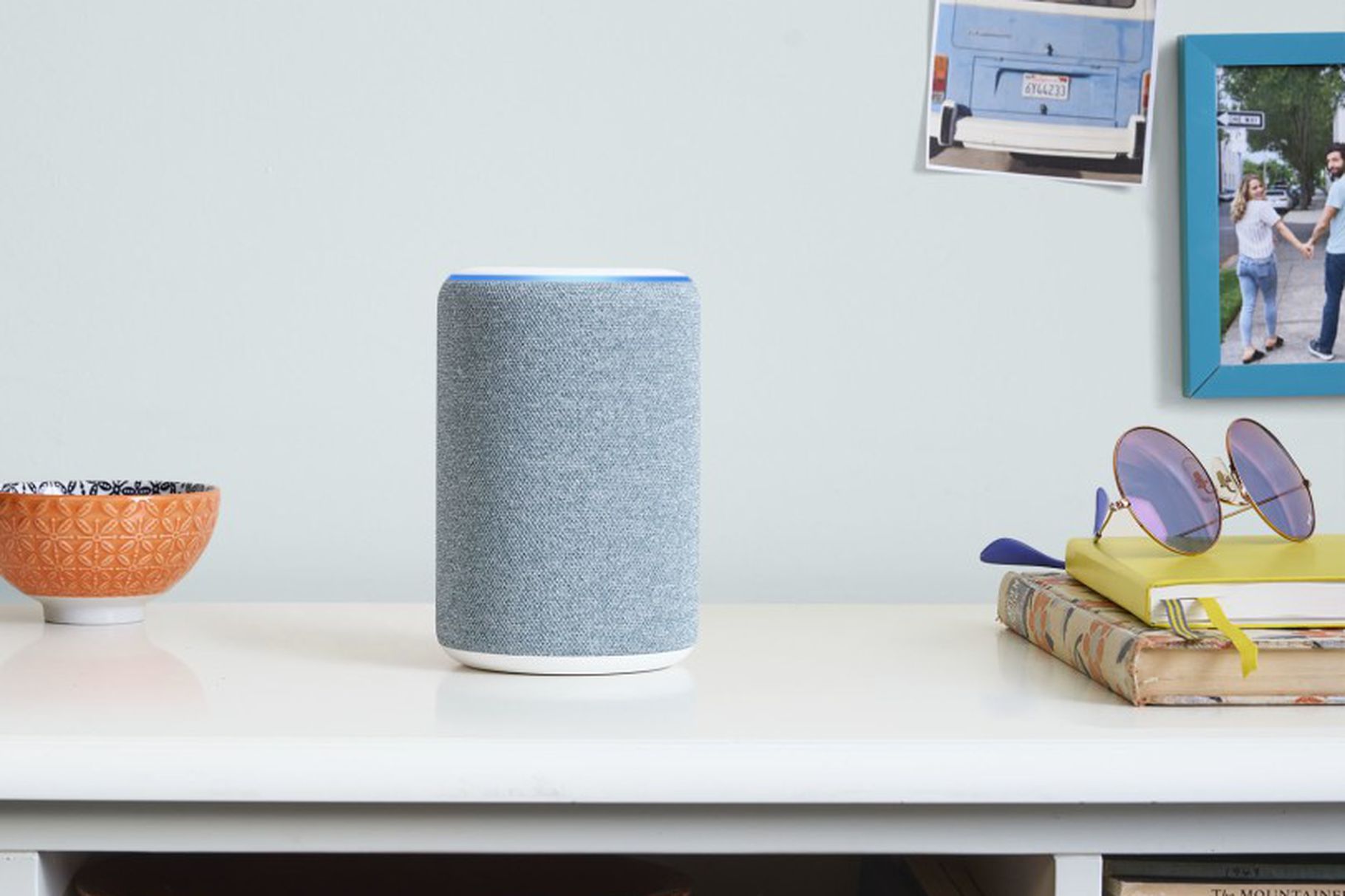 The smart speaker that started it all for Amazon is back for its third-generation version. This updated speaker shares the overall design cue of the previous version, but it adds upgrades where necessary (via The Verge). For instance, the third-generation Echo has better audio quality thanks to Neodymium drivers inside, taken from the Echo Plus. The new Echo also features a three-inch woofer for good measure.

With the updated internals, the new Echo features clearer mids and highs, and the “base is stronger” as well. There is a new “Twilight Blue” color option along with all of the older, familiar fabric colors.

The third-generation Echo smart speaker goes up for pre-order today and costs $99. 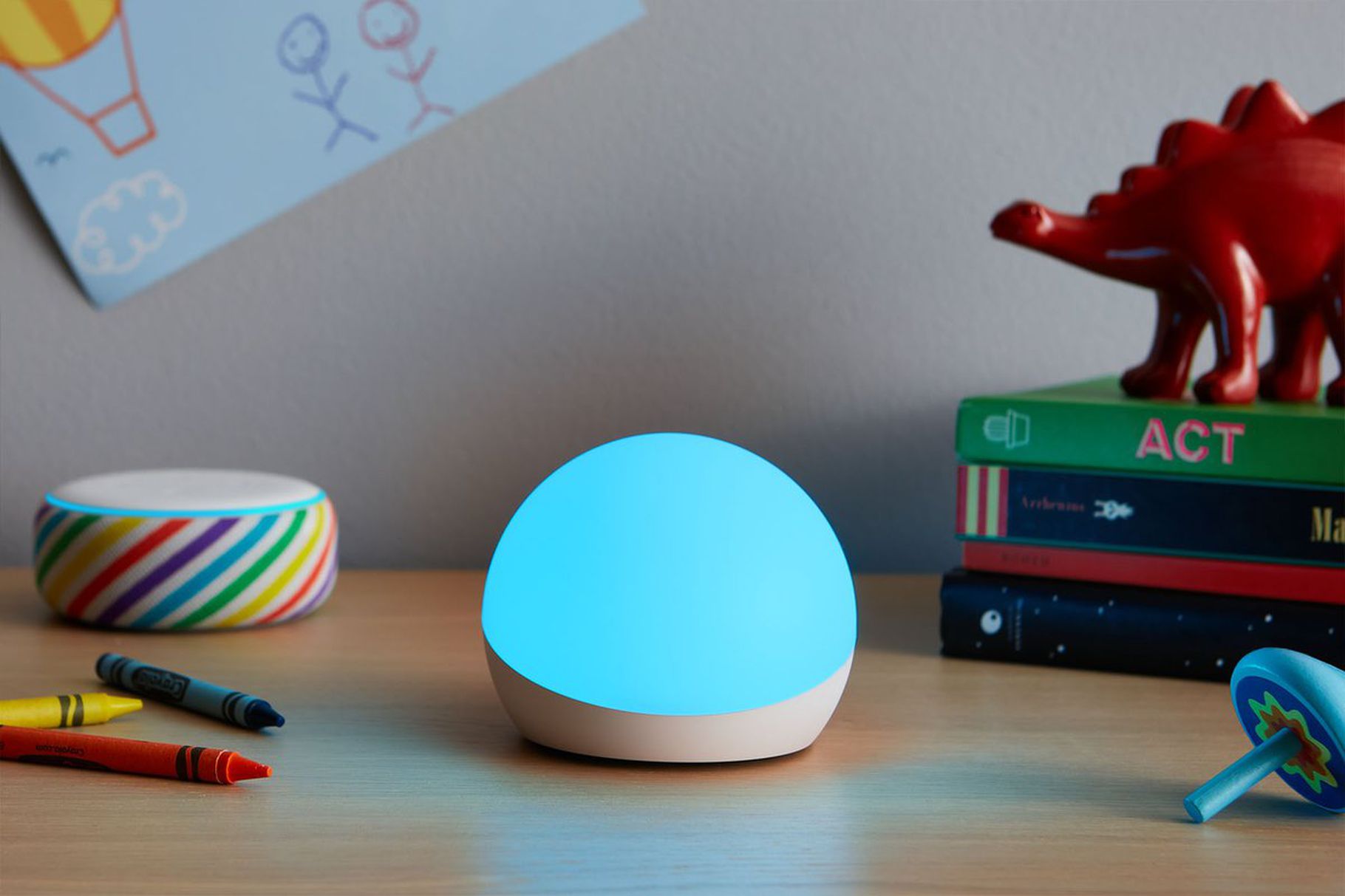 How about a lamp? The Verge reports out of Amazon’s event that the above image is Amazon’s new Echo Glow lamp. You can tap it to change the color, and it’s actually built to facilitate dance parties. Yes, you read that correctly. The Echo Glow lamp is designed to help host some dance parties, blinking a series of different colors to give the party some real flair.

This is meant as a complementary device to a standard Echo smart speaker or the Echo Show lineup of smart displays.

Beyond dance parties, this is meant to be a light for kids. Parents can start a sleep timer, which will see the lamp dim over a set period of time until it shuts off. The aforementioned dance party not only includes blinking lights, but also music. And parents and kids can ask the Echo Glow to show a campfire light.

The Echo Glow will cycle through rainbow colors as well. You can get all of that for $29.99, with pre-orders going live today in the United States.