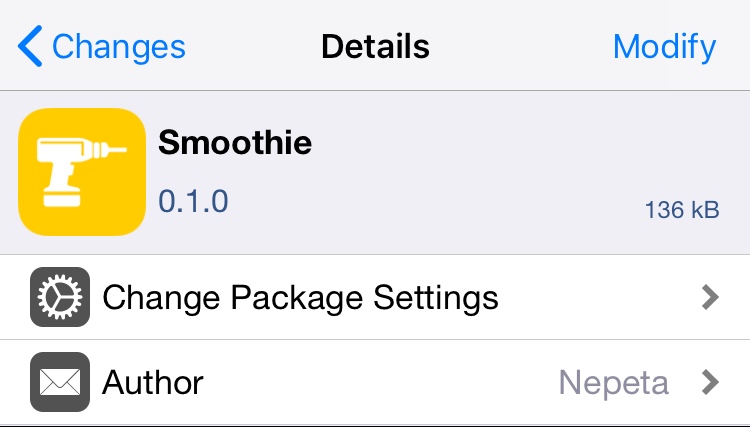 As you scroll through the Home screen’s many pages on a stock device, the scrolling will automatically stop once you arrive on the next page, an effect known to many as ‘paging.’

If you don’t like this paging effect and would prefer that your Home screen scrolling experience felt ‘infinite’ as it does when navigating down a long web page, then you’ll probably come to appreciate a newly released jailbreak tweak dubbed Smoothie by iOS developer Nepeta.

If you still aren’t quite sure what ‘infinite’ scrolling means, it effectively removes the ‘paging’ effect that you’d normally witness while moving from one Home screen page to another. To better demonstrate what we mean by this, we’ve embedded animated GIFs below to depict the Home screen scrolling experience both before and after installing Smoothie:

You’ll notice just how fluid and limitless the scrolling feels after installing Smoothie. As you scroll, the Home screen pages no longer ‘snap’ to the center of the screen. This makes scrolling from one page to another less tiring for your fingers and lets you skip several pages with a single swipe as opposed to several.

If you’re interested in giving Smoothie a try, then you can download it for free from Nepeta’s repository in Cydia or Sileo. The tweak doesn’t come with any options to configure and is compatible with jailbroken iOS 11 and 12 devices. Moreover, Smoothie has been open-sourced on the developer’s GitHub page.

Do you prefer the native scrolling effect or the newer one imposed by Smoothie? Discuss your position in the comments section below.