Just yesterday a report came out that detailed how several models of iPhones, along with smartphones from other manufacturers, exceed the legal limit placed for radiofrequency radiation output level.

Now, a law firm based out of Chicago, Illinois, is ready to capitalize on the report from The Chicago Tribune (via MacRumors). The law firm is Fegan Scott, and according to Beth Fegan, a managing partner at the firm, this latest report could lead to the “Chernobyl of the cell phone industry, cover-up and all”.

Fegan says that we “know” that cell phone radiation is “dangerous”, but says that now, thanks in part to this report, we don’t know “how dangerous” they could be.

If we found that produce sold in grocery stores contained twice the levels of pesticides as the law allows, we would be up in arms, demanding the products be pulled from the shelf – this is no different,” said Beth Fegan, managing partner of Fegan Scott. “In this case, we know the cell phone radiation is dangerous, but the terrifying part is that we don’t know how dangerous, especially to kids’ brain development.

That initial report yesterday outlined how the publication was able to get an accredited lab to test a variety of devices, including several iPhone models, using a specifically designed liquid that’s meant to replicate human tissue. Probes were then dipped into the liquid to test the radiofrequency radiation output levels. 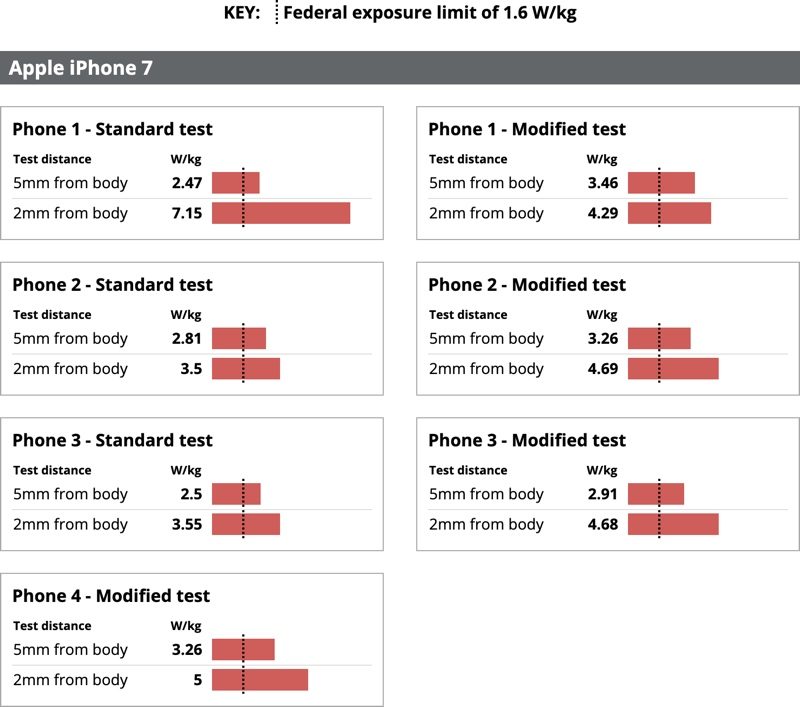 The iPhone 7 was found to be the worst offender of the bunch. The iPhone 8 and iPhone X also exceeded recommended safety levels. Meanwhile, the iPhone 8 Plus managed to do pretty well and stay within range.

Apple, at the time, provided a follow-up statement, after saying that the tests were inaccurate. For what it’s worth, the original publication was able to do a follow-up test of its own, with modified parameters, which showed many devices still exceeded the legal limit for radiofrequency radiation levels.

Apple said those tests were inaccurate, too. Apple’s statement on the matter:

All iPhone models, including iPhone 7, are fully certified by the FCC and in every other country where iPhone is sold,” the statement said. “After careful review and subsequent validation of all iPhone models tested in the (Tribune) report, we confirmed we are in compliance and meet all applicable … exposure guidelines and limits.

The FCC, meanwhile, has confirmed it will be moving forward with its own investigation following the Chicago Tribune‘s report.

Would you be surprised to hear that this all turns out to be a Chernobyl-sized situation?