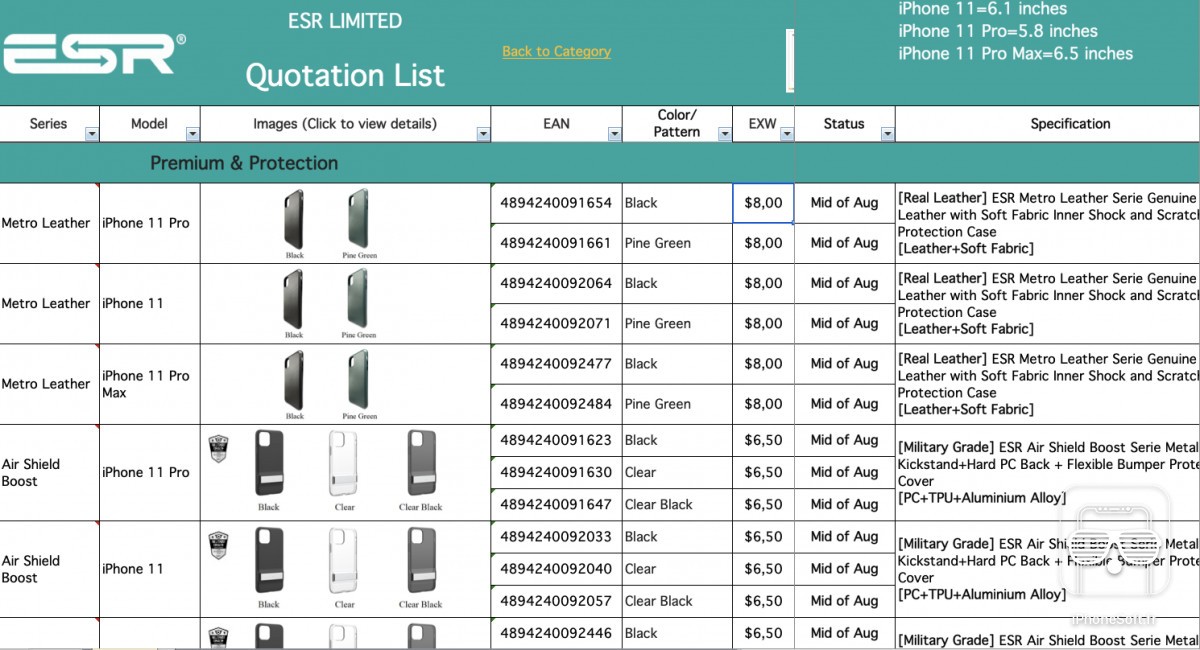 A trio of new iPhone smartphones coming down the pike this fall that will succeed the current iPhone XR, iPhone XS and iPhone XS Max offering will be reportedly branded as “iPhone 11”, “iPhone 11 Pro” and “iPhone 11 Pro Max,” respectively.

The French blog iPhoneSoft has reportedly managed to get hold of a spreadsheet sourced from a budget iPhone enclosure manufacturer, seen top of post, which appears to reveal both the name and dimensions of the upcoming new iPhones to be released shortly after Apple’s September event (another report has it that this years’s iPhone will drop the iPhone branding from the back). Of course, these “iPhone 11”, “iPhone 11 Pro” and “iPhone 11 Pro Max” names could be just placeholders until Apple officially reveals its 2019 smartphone lineup.

At any rate, this isn’t the first time the “Pro” moniker was floated around.

Last week, an anonymous Twitter account with a proven track record said that at least one of the models will have “Pro” in its name, leading the Internet to predict that this year’s high-end iPhone model might be called “iPhone 11 Pro”. Assuming these reports are accurate, Apple will release new phones later this year that will for the first time use the “Pro” moniker. I’m not sure what to think, but something about it just doesn’t feel right to me.

“Pro” for iPhone? Crazy naming schemes over the past few years.

For starters, I don’t see Apple switching to the old numbering scheme after having used Roman numerals to brand this and last year’s iPhone models. While it is entirely possible that the Cupertino company could, after going from iPhone 7 and 8 to iPhone X and XS, release something called “iPhone 11”, I’m convinced that doing so will run the risk of introducing unnecessary user confusion into the product mix.

On the other hand, the vast majority of users were confused by the iPhone X name and I’ve yet to meet a person that pronounces that name correctly (“iPhone ten” instead of “iPhone ex”).

Either way, I find this idea of marketing the iPhone XS and iPhone XS Max successors as “iPhone 11 Pro” and “iPhone 11 Pro Max” a bit preposterous, I must say. These are mouthfuls, but that’s just the beginning of the problem because labelling any iPhone models as a pro smartphone would be misleading — there’s nothing in particular about these smartphones that would make creative professionals choose them over any other high-end smartphone.

On the flip side, Apple has been using the “Pro” moniker to segment its computer offerings into models for consumers (MacBook Air and Mac mini, for example) and machines meant for demanding professional users (like iMac Pro, Mac Pro and MacBook Pro). And while you could argue that the current MacBook Pros lack hardware powerful enough to truly cater to the needs of creative pros, the distinction between consumer and prosumer tablets couldn’t be clearer with the iPad, iPad mini and iPad Air being budget tablets on one hand and, on the other hand, the iPad Pro models being advertised as high-end tablets for creative pros.

So, why not do the same with iPhones — if not for anything else than for consistency’s sake?

Before signing off — and I’m just throwing this out there as yet another food for thought — there was this recent rumor that the 2019 iPhone lineup could get Apple Pencil support. Maybe that’s just one way to earn that “Pro” designation?

What do you think, girls and boys? What would you like Apple to name the next iPhone? And while we’re at it, would a triple camera setup be enough to earn a branding change like this?