Apple is not a big fan of user-replaced pieces within its devices. The company has long fought against the “Right to Repair”, and this latest move to do just that may irk some users out there.

According to iFixit, Apple is “locking” certain iPhone models in an attempt to dissuade some customers from getting third-party battery replacements, and installing non-genuine Apple batteries in their phones. The group is reporting that if an iPhone XR, iPhone XS, or iPhone XS Max is equipped with a battery not replaced by Apple itself or an Authorized Service Provider, then software will pop up saying they need to get their battery serviced.

If you replace the battery in the newest iPhones, a message indicating you need to service your battery appears in Settings > Battery, next to Battery Health. The “Service” message is normally an indication that the battery is degraded and needs to be replaced. The message still shows up when you put in a brand new battery, however. Here’s the bigger problem: our lab tests confirmed that even when you swap in a genuine Apple battery, the phone will still display the “Service” message.

Put simply, Apple is locking batteries to their iPhones at the factory, so whenever you replace the battery yourself—even if you’re using a genuine Apple battery from another iPhone—it will still give you the “Service” message. The only way around this is—you guessed it—paying Apple money to replace your iPhone battery for you. Presumably, their secretive diagnostic software can flip the magic bit that resets this “Service” indicator. But Apple refuses to make this software available to anyone but themselves and Apple Authorized Service Providers.

When this situation does pop up, and it can in either the current iOS 12 versions or even in the iOS 13 betas, it prevents the user from accessing the Battery Health features Apple baked into the mobile operating system some time ago. If a third-party battery is installed, the user will instead see the service message that reads, “Unable to verify this iPhone has a genuine Apple battery. Health information not available for this battery”. 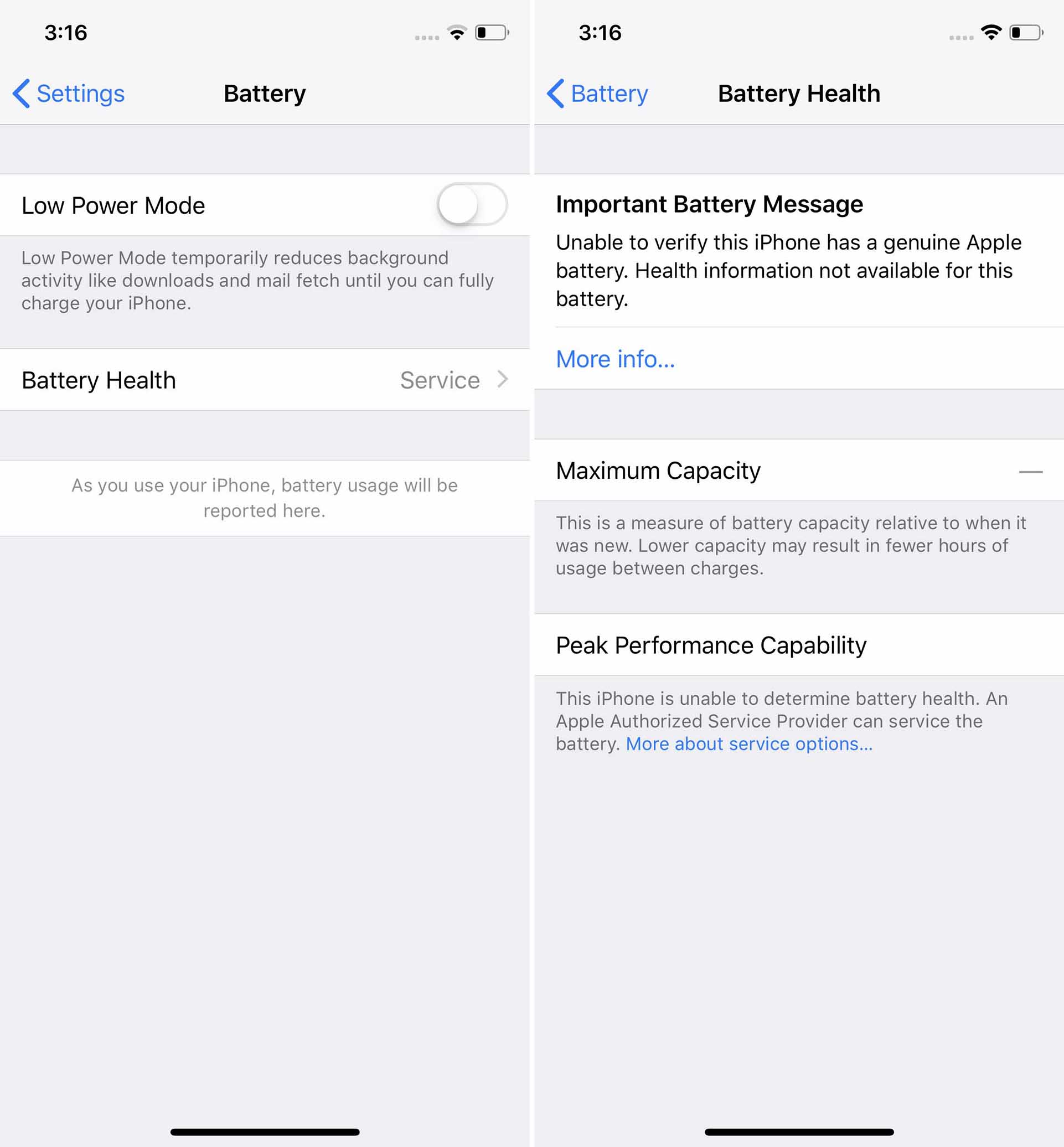 It is worth noting that the third-party battery will still function as it’s intended, and so will the rest of the iPhone. However, this will prevent users from accessing the Battery Health feature, which could make it harder to determine when the new battery will eventually need to be replaced.

You can check out a video from YouTube channel The Art of Repair to see the issue firsthand:

As for why Apple is going this route, it more than likely would be connected to its statements on the “Right to Repair” front recently. The company recently stated that it fights against user replacements and fixes because it wants its customers to know product repairs are done “safely and correctly”.

Indeed, repairing a swollen battery could be potentially dangerous, and it would best be handled by a professional. But using a third-party battery, and not one specifically designated by Apple, should be okay in general. Apple may be going to a bit of an extreme here.

But, what do you think? Is Apple going too far, or does this make sense?