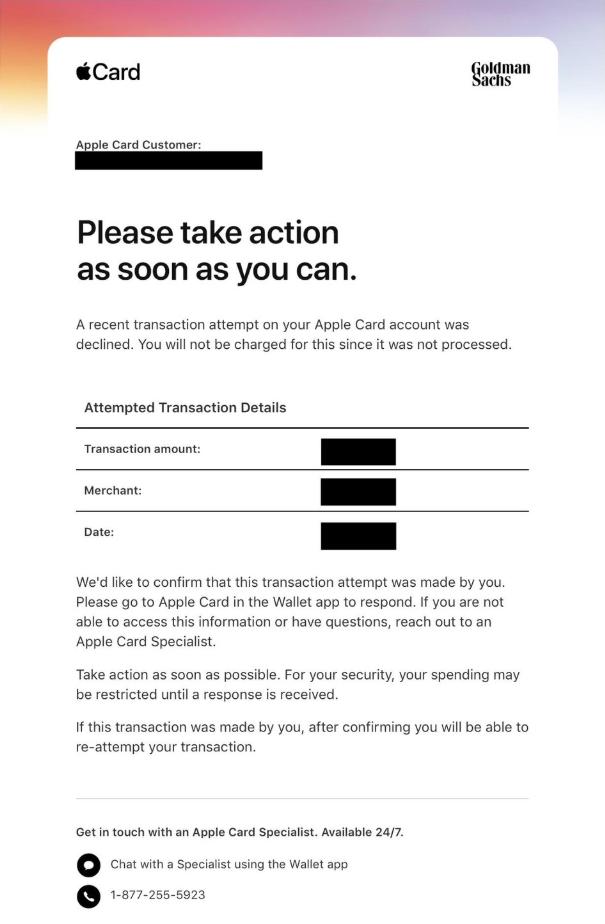 In case of a declined Apple Card transaction, the system will issue an email message that will list the attempted transaction details and caution the user that any further spending may be restricted for security reasons until he or she has confirmed the transaction in the Wallet app.

Other financial institutions have similar precautions in place to prevent or minimize the impact of credit card fraud so this is nothing out of ordinary, but we thought you might like to know and be informed about fresh new details pertaining to Apple Card’s fraud monitoring.

The email screenshot was tweeted today by MacRumors.

“A recent transaction attempt on your Apple Card was declined,” the message reads. “You will not be charged for this since it was not processed.” Along with listing the attempted transaction amount, merchant and date, the email message asks the user to confirm or reject the transaction in the Wallet app so that security restrictions could be lifted.

“We’d like to confirm that this transaction attempt was made by you,” the email continues, asking the user to visit the Apple Card section in the Wallet app to respond. If for any reason you cannot access this information, Apple wants you to reach out to an Apple Card Specialist.

“Take action as soon as possible,” the message cautions. “For your security, your spending may be restricted until a response is received.” If this transaction was made by you—and you confirmed it as such in the Wallet app—after authorizing you’ll be able to re-attempt the transaction, advises the Cupertino firm. You can get in touch with an Apple Card Specialist 24/7 via email, phone or by chatting with them right within the Wallet app.

Apple Card is launching sometime in the summer. Ahead of launch, Apple continues to expand its availability for testing, with its own employees testing the card since July.

Apple Card is a MasterCard-branded product realized in co-operation with investment bang Goldman Sachs (their logo is included in service emails). Initially a US-only product, Apple Card may launch in Canada in 2019.