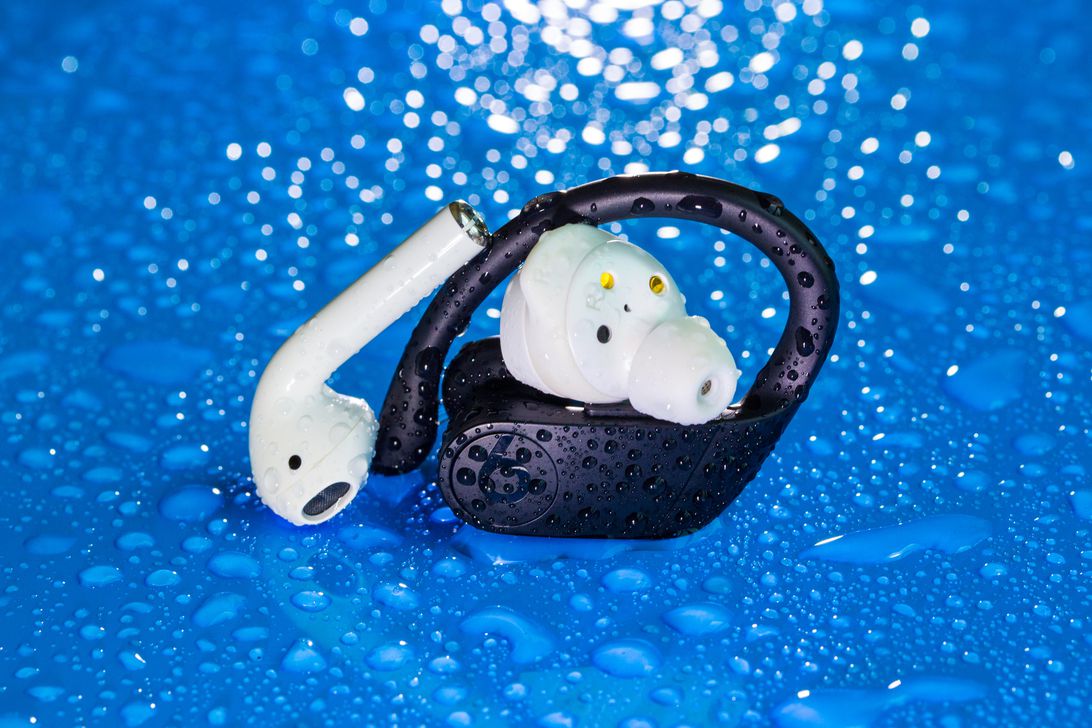 One of the more oft-requested features for a future version of the AirPods is some form of water resistance. But even before that happens (if it happens at all), it looks like the current iteration of the AirPods can fare pretty well.

Here’s how it all looks from a rating standpoint: The AirPods don’t have any kind of water resistance at all. Meanwhile, the Powerbeats Pro are IPX4 rated, which means they can actually withstand full on splashing water and plenty of sweat. The IPX2 rating for the Galaxy Beats means they can handle some sweat, but not a lot, and a small amount of water contact as well.

Things started off easily enough with a sweat test.

When you’re working out, the last thing you want to worry about is if your earbuds will survive an intense gym session or a sweaty run, which is exactly what both the Powerbeats Pro and Galaxy Buds are designed to withstand. To test the claims, Lexy and I took simulating a sweaty workout at the gym. We wore each pair of earphones and sprayed each other in the face with water until droplets trickled down the sides of our heads. For the record, the AirPods weren’t meant to be tested this way.

After the sweat test, they dried the headphones and tried them again. Each of them performed as they should, which is only really commendable for the AirPods considering the lack of any kind of water resistance rating.

Going beyond that, the test moved beyond what these headphones should be expected to handle. But this is for science so let’s see how far things can go, right?

Once they had proved they could hold up to the claim, we decided to push all three beyond their limits with a dunk test. Accidents happen, whether it’s dropping your buds in the sink while doing the dishes, or watching them fall out of your back pocket into the toilet (gasp)we knew we just had to submerge these little guys under water.

We dunked each pair into a clear fish bowl with a foot of water for five seconds. It’s worth noting that the AirPods went about two seconds over because of bad time-keeping on our part. We just love pushing the AirPods beyond what they are designed to do.

Surprisingly, yet again, the AirPods managed way better than they probably should. The Bluetooth connection kept up, the microphone worked, and the audio quality remained “good”.

Next? How about a washing machine? The test might sound ridiculous, but considering these are truly wireless headphones it’s certainly possible someone might forget one, or both, in a pocket and toss them into a washing machine.

After two rounds of testing and no clear winner, we had no choice but to raise the stakes and put them through the ringer (literally). We took them all to the laundromat to reenact another common earbud accident: a trip through the wash.

We took each set of buds out of their cases and zipped them up in a jacket pocket before throwing them into separate washing machines with a few more items that needed washing. All three machines were set on a normal 30-minute cycle with cold water and laundry detergent.

After the wash, they dried the headphones and tried them again. The Powerbeats Pro still had a solid Bluetooth connection and good audio quality, and the microphone quality was compromised. The Galaxy Buds only had one earbud working when listening to music, but the microphone worked.

How about the AirPods after being tossed in a washing machine? The Bluetooth connection worked, but the audio quality was muffled. The microphone still worked, albeit it was muffled as well.

So, unsurprisingly: The Powerbeats Pro came out at the top of the list as far as performance goes, but it’s worth noting just how well the AirPods fared all things considered:

With the highest IP rating amongst the three wireless headphones we tested, it’s no surprise that the Powerbeats Pro performed the best overall. The Galaxy Buds seemed to have the least amount of damage occur to its microphones, but the buds themselves only played sound on one side. Even then, we had to crank the volume to its maximum level to hear much at all.

The AirPods were the outliers of the bunch given they aren’t rated for sweat or water and turned out to be the biggest surprise in our test. After all of our testing, they didn’t sound as good as when we first took them out of the box, but they are certainly still usable even after going through the wash.

An interesting test! Especially considering how well the AirPods did in comparison.

Here’s the video of the test: