As you interact with the Lock screen’s passcode entry interface, you’ll notice that the number keys are always in the same place. This makes entering passcodes easier, but it also makes it effortless for nosy folks to glance over your shoulder and watch the numbers you dial in to unlock your device.

Here to help with this problem is a free jailbreak tweak called CodeScramber 12 by iOS developer eskimo_dev. As you might’ve already deduced from the tweak’s name, CodeScrambler 12 randomizes the locations of the passcode’s numeric keys every time you try to unlock your handset, as shown above.

CodeScramber 12 effectively solves the over-the-shoulder glancing issue because people are more likely to guess your passcode by memorizing the positions of the buttons you tap than they are to try and discern the small font printed on each button. Randomizing the numbers every time you unlock your handset improves the odds that this person will tap the wrong numbers after watching you enter your passcode, effectively blocking them out.

The concept behind CodeScramber 12 should sound vaguely familiar to veteran jailbreakers, and that’s because the same developer released the original CodeScrambler back in the iOS 5.x era. Another tweak dubbed ScramblePass later supported newer iOS versions as well.

Once installed, CodeScrambler 12 puts a preference pane in the Settings app where you can configure the tweak to your liking: 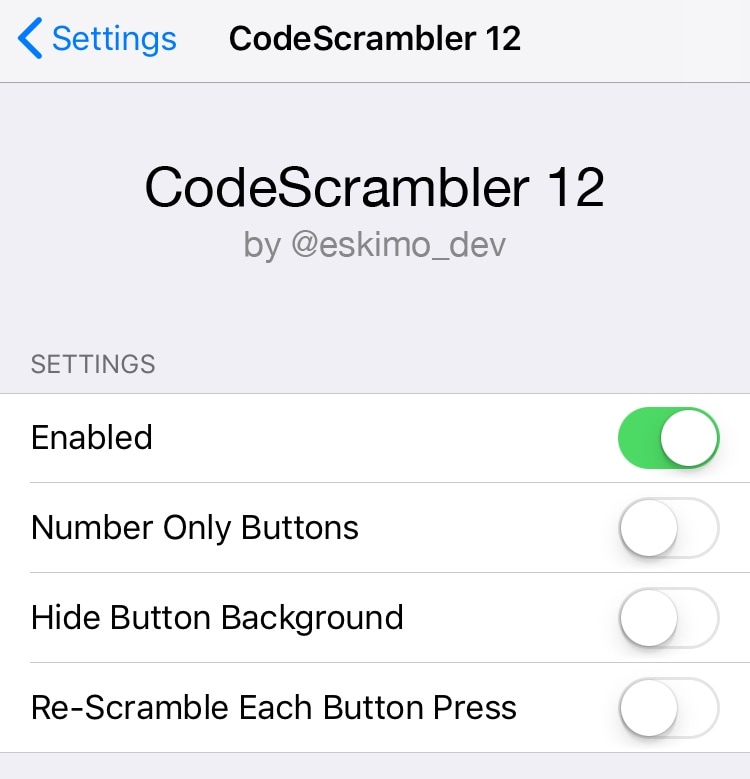 The additional options included with CodeScrambler 12 can be used to further confuse an over-the-shoulder passcode glancer, and for that reason, we think this tweak will appeal to the anxious folks out there who want their information to remain secure at all costs.

While most people are using Face ID or Touch ID-equipped handsets these days, that doesn’t mean they don’t see the Lock screen’s passcode interface every now and again. That said, everyone in this predicament can benefit from the effects of CodeScrambler 12.

Those interested in trying CodeScrambler 12 can download it for free from eskimo_dev’s beta repository in Cydia or Sileo. Those who aren’t already using this repository can add it to their package manager of choice via the following URL:

CodeScrambler 12 supports all jailbroken iOS 7-12 devices, including the A12(X) variety.

Do you think CodeScrambler 12 improves your handset’s security? Let us know your thoughts in the comments section below!