Apple’s recent Macs include enhanced built-in audio devices, according to Rogue Amoeba who are well-known audio specialists and creators of quality audio software for macOS and iOS.

The magic of the T2 chip

Both the new Mac mini and MacBook Air have two distinct audio devices independent from one another: the headphone jack and the internal speakers. In fact, all Macs with the T2 chip exhibit this behavior, including iMac Pro and 2018 MacBook Pro models.

With T2 Macs, there are actually two distinct output devices. The headphone jack and the internal speakers are separate devices, completely independent from one another.

You can manage built-in audio devices through System Preferences → Sound → Output. Now, contrast this with older Mac models that allowed only one of these ports to be active at a time.

Why you should care

Paul explains how this is useful:

Perhaps the most obvious way to take advantage of these two devices is to send the Mac’s sound effects to the built-in speakers, while using the headphone jack for music and other audio. This way, you’ll never be jarred out of a good listening session by an error message beep blaring over your music.

As mentioned, macOS delists the headphone port if nothing is plugged in to it—make sure that your headphones or speakers are plugged in so they appear in System Preferences.

macOS’s auto-switching that prioritizes the headphone jack still works like you’d expect. And if you use headphones with a built-in microphone, macOS will recognize it as an input device. 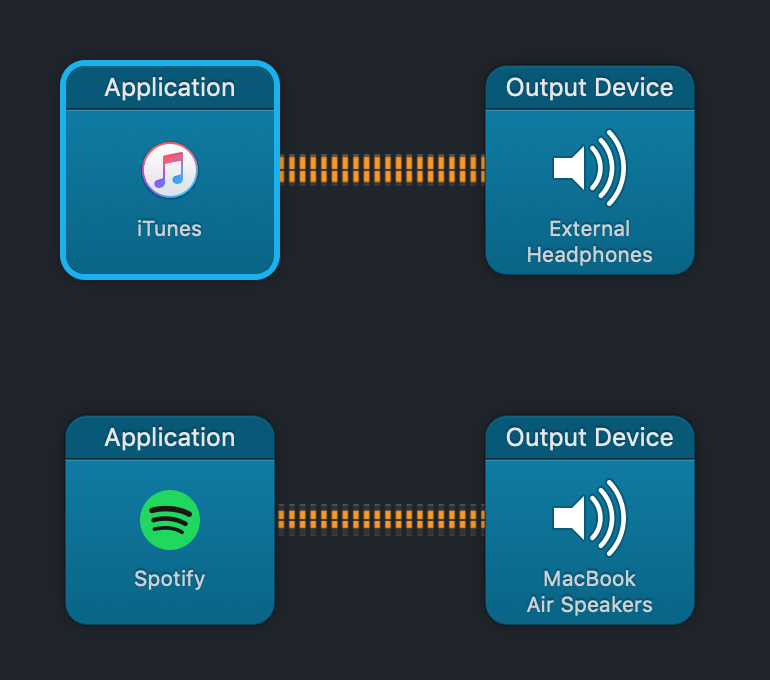 Users of Rogue’s excellent Audio Hijack app who own a T2-outfitted Mac can even do things like route audio from iTunes to a pair of external headphones while audio from Spotify plays to the built-in speakers.

What do you make of this Apple T2 chip-specific capability? Do you think it’s nice for customers to have the ability to use multiple audio devices at the same time?