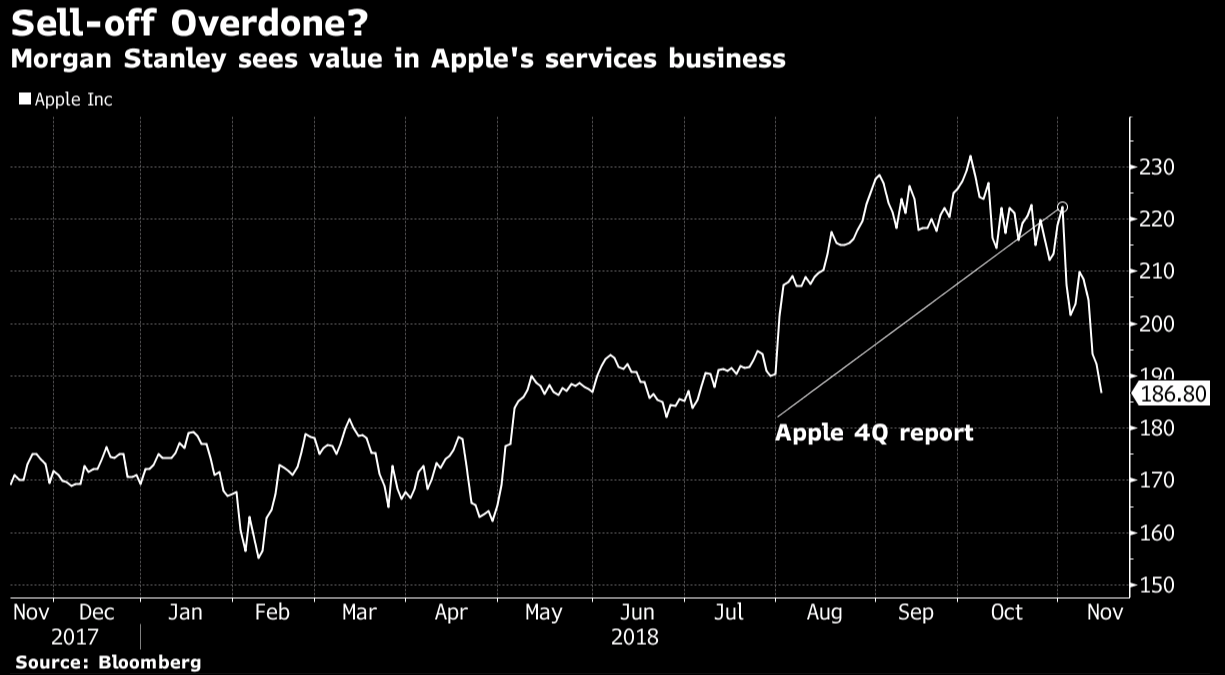 Apple has dropped about 16 percent since early November because narrow-minded investors continue to focus on unit sales rather than the booming Services revenue.

The investment bank wrote in a note to clients, seen by Bloomberg:

The selloff suggests investors remain narrowly focused on units, despite the increasing value of Apple Services. As the smartphone market matures, Services takes the growth baton from Devices which ultimately results in more stable growth and higher margins at Apple.

iPhone sales were flat this past quarter, and growing at a slow pace in the previous quarters (usually by a couple of percentage points). Now, it’s true that the Mac and iPad businesses are also experiencing growth issues—that’s why Apple will stop reporting unit sales going forward. On the flip side, however, revenue from sales of iPhones, iPads and Macs is rising because recent price hikes have boosted Apple’s average selling prices.

News flow around units is creating volatility and a buying opportunity while the investor base is still in the process of transitioning away from units.

Apple began that process two years ago when first iPhone growth began waning. While iPhone sales remain stagnant, the Services business is booming. In the September quarter, Services raked in $9.98 billion, an increase of 27 percent from the year-ago quarter.

The segment includes audio accessories and Beats products, iCloud storage, Apple Music, App and iTunes Stores and more. Morgan Stanley says a selloff in Apple shares is overdone. While Apple has a plan B for peak iPhone—Services!—many of its suppliers, unfortunately, do not.

A look back at the past seven negative revisions at iPhone suppliers suggests these data points don’t predict future share price performance, particularly beyond a one month period.

Tim Cook repeatedly cautioned against measuring Apple’s performance metrics based on supply chain reports, which is a complex beast with too many variables. Analyzing any particular data point narrows an analyst’s vision because Apple often sources a particular component from multiple manufacturers.

But as consumer demand slows in China, the world’s second-largest economy, the country “remains a wild card and the biggest risk to further pressure on iPhone demand next year,” Morgan Stanley analysts concluded. The investment bank has affirmed its overweight rating and $253 price target on the stock.